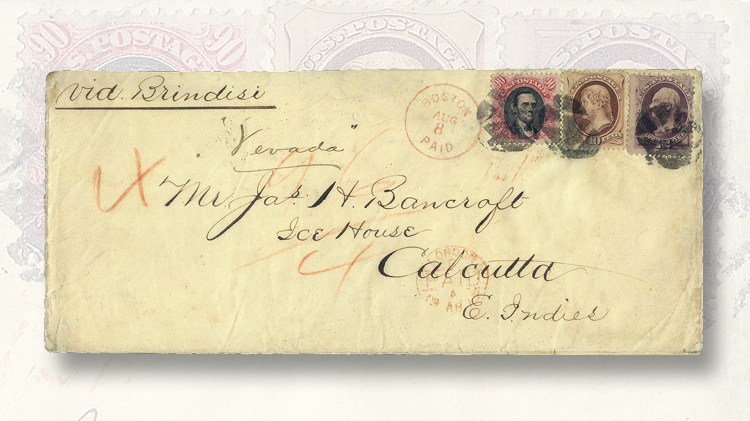 Arthur K.M. Woo acquired the famous Ice House cover in 2009. The storied 1873 cover, bearing the 1869 90¢ Abraham Lincoln stamp, was recovered at a stamp store in Chicago in January 2006. Its “Ice House” moniker comes from the address: an ice house in Calcutta, India. His passion for this iconic piece of postal history dates back to 1997. 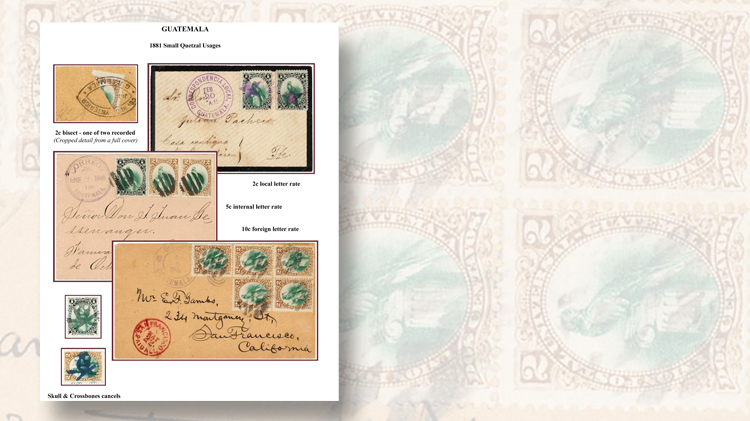 This page from Extracts from the Dr. Arthur K.M. Woo Collections features a number of magnificent Small Quetzel stamps and covers from Woo’s Guatemala Small Quetzel collection, considered the finest ever assembled.
Previous
Next

Prior to the show, I had an opportunity to visit with John Zuckerman and Corey Long of Robert Siegel Auction Galleries.

During our discussions, Zuckerman let me peruse a copy of a fascinating book titled Extracts from the Dr. Arthur K.M. Woo Collections.

Edited and published by dealer Brian Moorhouse, the book was printed in a very limited edition of just 50 copies.

As the title suggests, the book presents highlights from a number of Woo’s collections, many of which contain world-class rarities and other choice gems.

Flipping through the pages, I couldn’t help but be amazed at what Woo had accomplished since he first displayed items from his collections at an exhibition in Hong Kong in 1988.

Moorhouse first met Woo in the early 1990s. Since then, they have collaborated closely, with Moorhouse providing expert guidance in the development and expansion of Woo’s collections and exhibits.

As a specialist in the stamps and postal history of South and Central American countries, Moorhouse helped Woo assemble over more than two decades what is regarded as the finest collection of Guatemala’s 1879 and 1881 Small Quetzel issues.

Illustrated nearby is a page from the Extracts book, which displays some of the Small Quetzel stamps and postal history from Woo’s Guatemala collection.

One can immediately sense Woo’s discernment because each item combines superb condition with marvelous eye appeal.

Particularly captivating are the two Small Quetzel stamps at lower left, each bearing a superb strike of a skull and crossbones fancy cancel.

Indeed, every page in the book is similarly arrayed with beautiful material — a true feast for the eyes.

Woo’s passion for stamps depicting birds is informed by his many years as an avid ornithologist.

Back in those days, Woo recalled, he still had much to learn.

“I had at that time, unfortunately, a very minimal knowledge of International Federation of Philately rules and regulations,” Woo said.

“I knew nothing about how FIP judges work and, more importantly, I was totally ignorant on how points are given to make up the award for an exhibit.

“But even then, I was overjoyed to be awarded a gold medal for my exhibit.”

Woo’s knowledge of exhibiting expanded with the able advice of Moorhouse.

“I do provide assistance and ideas for all of his collections,” Moorhouse said, “even those outside my own specialty areas, as and when my guidance is called for.

Moorhouse’s fastidiousness has paid off for Woo in tremendous fashion: Of Woo’s 20 active collections at the time the Extracts book was published, 12 had won international gold medals, and eight had received international large gold medals.

In 2002, he won the American Philatelic Society Champion of Champions award for his stellar “Western Australia” exhibit.

He was awarded the grand prix national award at the FIP show in Melbourne, Australia, in 2013.

Woo’s beginnings as a stamp collector will sound familiar to many because he discovered the hobby while in high school in Hong Kong, where he was born.

University studies and practicing medicine for two decades limited the time Woo could devote to stamps.

As Moorhouse explains in his short biography of Woo in the Extracts book, Woo did not pick up the hobby in a serious manner until the 1990s, when he was semi-retired.

“It was during this period that he started to attend stamp shows, philatelic functions and society events whenever he could,” Moorhouse writes.

The book opens with a selection of Woo’s “personal worldwide favorites.”

Among his favorite United States rarities is the famous Ice House cover, which bears the only genuine on-cover example of the 1869 90¢ Abraham Lincoln stamp.

“Since about 1997, I had passionately followed and studied every detail available regarding the past history of this most famous cover,” Woo said.

“When it came up for auction in 2009, I had already done my homework. This item would make a very important page in my exhibit collection of the U.S. 1869 Issues.”

The storied 1873 cover was recovered at a stamp store in Chicago in January 2006. Its “Ice House” moniker comes from the address: an ice house in Calcutta, India.

A protracted legal battle followed, and the cover’s rightful owner was determined to be the estate of J. David Baker, who owned it when it was stolen from his home in 1967.

In June 2009, Woo was ready to acquire the Ice House cover when it came across the Siegel auction block. He paid $431,250 for the cover and took possession of it after it had been carefully repaired and cleaned (to remove discoloration from a sealed tear).

The Ice House cover, in its repaired state, is pictured nearby.

Section two of Extracts presents snapshots of 15 of Woo’s exhibit collections, as well as a “small group of selected countries” from Woo’s massive “Early Bird” collection.

Perusing these pages allows one to gain an appreciation of the scope of Woo’s achievements. When asked which of his exhibits was the most fun to assemble, Woo was reluctant to make a selection.

“I have found each and every one of the exhibits that I have put together to be both interesting and challenging as well as a lot of fun. That’s why I chose these exhibiting areas, because each appeals to me personally,” Woo explained.

“Today, most of all my exhibits are still active and go to shows all over the world, although my very active exhibition days are almost over.

“This is one of the reasons why I decided it would be a good idea to have a permanent record in book format that shows the wide range of my collecting interests.

“In section two of my book, readers can also decide for themselves which of my exhibits have the most appeal to them. Many, of course, will doubtless base this on their own collecting interests.”

If you have an opportunity to view one of Arthur K.M. Woo’s exhibits up close, don’t pass up the opportunity. His treasures are a delight to the eye and bring with them marvelous stories.

And, for the rest of us, Extracts from the Dr. Arthur K.M. Woo Collections will provide viewing pleasure long after the Woo collections are dispersed to bring joy and satisfaction to a new generation of collectors and exhibitors.