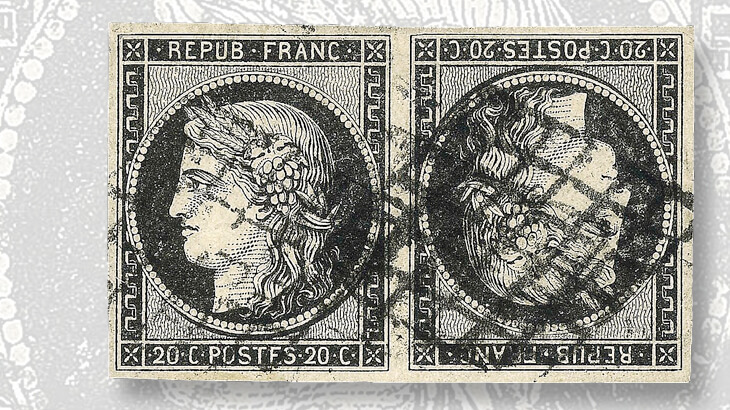 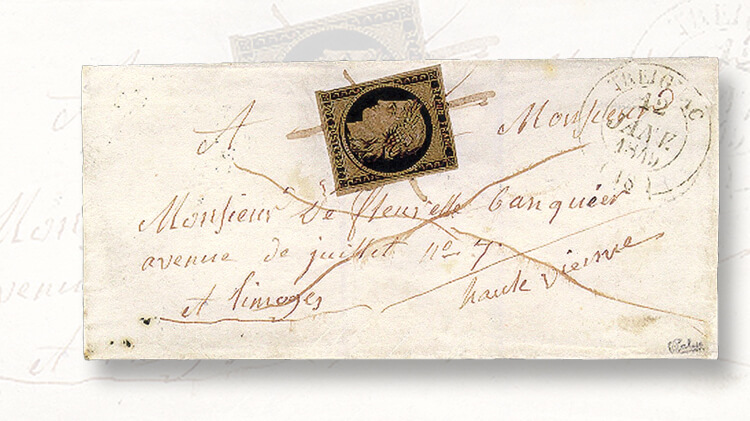 This cover posted at Treignac Jan. 12, bears a 20c stamp canceled by two heavy pen strokes and another very light cancel. It remains only to be said that January covers with pen cancellations are worth great premiums. (From the philatelic archive of Liane and Sergio Sismondo.) 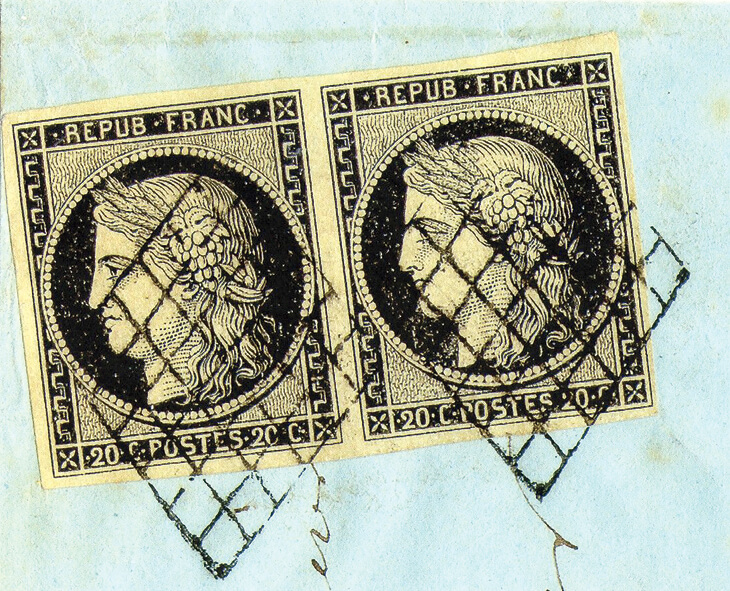 This pair of 20c stamps (from a cover) was canceled with two very fine strikes of the rhombus grill struck in black. (From the philatelic archive of Liane and Sergio Sismondo.) 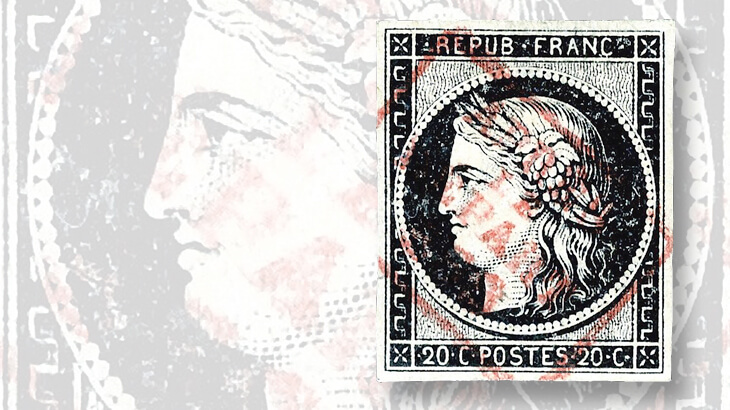 This otherwise ordinary 20c stamp was canceled with a rectangular-framed “APRES LE DEPART” (equivalent to the English “TOO LATE”) cancellation. (From the philatelic archive of Liane and Sergio Sismondo.)
Previous
Next

Editor's note: Part I of this two-part Unveiling Classic Stamps column was published on Linns.com March 3. Read it here.

After that grueling day in the legislature, Aug. 24, 1848, with the authorizing law for postal reform fully in place and with the approval of the stamp design by the cabinet, France’s Postmaster General Etienne Arago set out to work assiduously towards dissemination of new postal regulations and the production of the necessary stamps.

The resources of the national mint were brought to bear. Jacques-Jean Barre worked on the die, and the printer Anatole Hulot and his team prepared the plates, the paper, the glue and all else that needed attention before printing. They, too, worked at a good pace.

The date for launching the grand program, it was decided, would be Jan. 1, 1849. Ministerial data showed that, based on the volume of the previous years, upwards of 140 million letters would be posted in 1849, of which at least 10 percent would require a 20-centime stamp. Thus, the number of stamps to be printed was staggering.

Eventually, before Feb. 22, 1849, a total of 41.7 million examples were printed, and 10.6 million were incinerated after obsolescence. This left 31.1 million stamps sold to the public. The stamp was withdrawn from sale on July 1, 1850, but continued to be accepted for payment of postage without limitation.

It was decided to begin production with the 20c stamp, and that it should be black. The choice probably was made for the same reasons the British made their basic stamp black. Both soon found the choice made to be inadequate. In January 1841 the British Treasury ordered the printing of 1-penny stamps in red. In early 1850 the French administration ordered the printer to change the color of the basic stamp to blue. The black ink, although it was less expensive than colored inks, was largely resistant to washing away cancellations, and therefore led to increased fraud.

What is perhaps most remarkable about the production of Hulot’s 20c stamps is their consistency: the color is quite uniform. It deviates only slightly towards gray shades in a few stamps, and those few, hardly ever seen, command a substantial premium. What does show much more variance, however, is the color of the paper. Normally it is slightly yellowish, ivory or off-white. Varieties include white paper, pale buff, and buff. The deeper the shade of buff of the paper, the scarcer and more valuable is the stamp. Stamps on white paper generally have no premium.

However, the collector of unused stamps should be aware that other possibilities exist. Proofs exist on white paper, not always easily distinguishable from the issued stamps, black on blue quadrille paper, gray on buff with poor impression, with obliterating bars instead of value in the tablets, and with “00” instead of “20.” And to make more confusion for the collector, there is a reissue of 1862 that is printed on paper that is of a deeper shade of yellow.

Amazingly, for the 1862 reissues only 4,350 stamps were printed of each denomination. They should be much scarcer than their values suggest. This last reissued stamp is listed in the Scott Standard Postage Stamp Catalogue and the Scott Classic Specialized Catalogue of Stamps and Covers as No. 3d. In general, proofs of this stamp are sold for less than mint examples in fine condition with gum, or about the same value as fine 20c unused stamps without gum.

Used multiples are scarcer than one would think. Pairs are worth a small premium, as shown in the catalog; however, they are of considerable interest. They represent payment for the second weight step, they often show postmarks more completely, and in some cases, with some cancellations, are outright rarities.

Strips of three, which are not at all common, sell for about $250 in fine condition. Strips of four are very scarce indeed, and may fetch as much as $600. Blocks of four are rare and have been known to fetch upwards of $3,750. Strips of five exist on cover as well, due to the third weight step rate for the year 1849 being 1 franc. Such strips, off cover, may be valued at $1,250, and on cover may start at $2,000.

I might note that this rate, although it did not raise an eyebrow in the legislature when it was first proposed, was an anomaly: every other rate schedule I am familiar with would have had the postage rate for the third step follow the simple progression 20c, 40c, 60c. Be that as it may, jumping to 1 franc was good for future collectors just to make such large multiple frankings accessible.

These inverted stamps, repeated in each plate, served a purpose. No printer of the experience and fame of Hulot would have permitted his plates to contain what can only be termed errors; had Hulot wanted, he would have hurried to correct the plates. After all, these are not flyspeck varieties; they are bloopers of huge proportion. There is nary a smidgen of doubt in my mind that the inverted cliches remained for an explicit purpose. What the purpose was I cannot say.

A few post offices, especially in Paris districts, decided to use datestamps from the stampless period to cancel the stamps, beginning on Jan. 1. First-day covers exist with circular datestamps canceling the stamps in black, red or blue. Paris bureau J introduced its own makeshift “killer” device before Jan. 8. Having noted these exceptions, most letters posted between Jan. 1 and Jan. 15 and, in some cases, up to Jan. 31 are canceled by pen. Almost always the cancel is with two strokes in shape of an X, and occasionally is more elaborate.

The nearby illustration shows a cover dated Jan. 12 and posted at Treignac, bearing a 20c stamp canceled by two heavy pen strokes and another very light cancel. It remains only to be said that January covers with pen cancellations are worth great premiums.

The most common cancellation on this stamp is the rhombus grill, almost always struck in black. Red and blue strikes exist and bring high prices: about $1,000 for blue, and about $650 for red. Covers with these colored postmarks are very rare and fetch upwards of $7,500.

Correcting their initial error, this canceling device was distributed to all post offices, beginning on Jan. 7 in some Paris district offices, Jan. 10 in others, and continuing until Jan. 31, when the distribution was completed to all corners of the country. Shown here is a fine pair (from a cover) with two very fine strikes of the grill struck in black.

As in most classic stamps of Europe, instructional markings were used for canceling stamps. We can find “P.P.” in black or in red, both being very rare. Other letters occasionally found are “C,” “D” and “G,” and their value on the 20c stamp may be about $1,000. Less rare are roller grills and stamps canceled with circular datestamps. Stating the matter in the simplest terms, all cancellations other than the grill deserve premiums. All colored cancellations bring great prices in the major auctions.

The stamp was also used in Algeria. Cancels from 11 post offices are known. The most common is Alger, about $350, and from the other 10 post offices, starting at $750. Finding these is like finding needles in a haystack, but it is rewarding when the needle is found.

Sorting through old collections, I found an extraordinary cancellation: struck in magenta across an otherwise ordinary 20c stamp was a rectangular-framed “APRES LE DEPART” (equivalent to the English “TOO LATE”). The stamp is shown nearby. Nowhere in my extensive library have I found reference to magenta-colored cancellations on the first issue of France. In contrast, in Great Britain and Ireland magenta cancellations are listed in the catalogs among premium cancellations (see my article about the first stamp of Great Britain on page 34 in the Dec. 21, 2015, Linn’s).

Among the most interesting usages of this stamp is the franking of military letters sent by French soldiers and noncommissioned officers from Rome, Italy, to France. The normal first-weight-step rate for a letter sent from France to Italy was 40c. Military personnel enjoyed a “partial” franchise. Their letters addressed to France would have to pay only 20c.

“What were they doing in Rome?” you may ask. In February 1849 the Papacy was chased out of Rome by revolutionaries, including the general and political leader Giuseppe Garibaldi. Pius IX, now in exile, petitioned France for help in restoring the normal order of things. On April 24, 1849, French troops, under the command of Marshal Nicolas-Charles Oudinot, disembarked at the harbor of Civitavecchia, marched on to Rome and launched the battle against Garibaldi’s men. On July 1, 1849, the rebels capitulated to the French Army. Pius IX returned to his domains on July 15.

Napoleon III ordered a substantial force to remain in Rome for the security of the Papacy. French troops remained until 1852 to ensure the maintenance of law and order, much to the chagrin of Risorgimento activists. All this time, amounting to more than three years, a French military post office operated in Rome for the benefit of the men in French uniform, and a substantial number of letters sent from there have survived.

Unfortunately, only covers or part covers can be identified as originating in Rome. Loose stamps cannot be thus identified since they were canceled with the usual grid postmark assigned to all post offices.