Stamps document the complex political evolution of New Guinea: Stamps Down Under 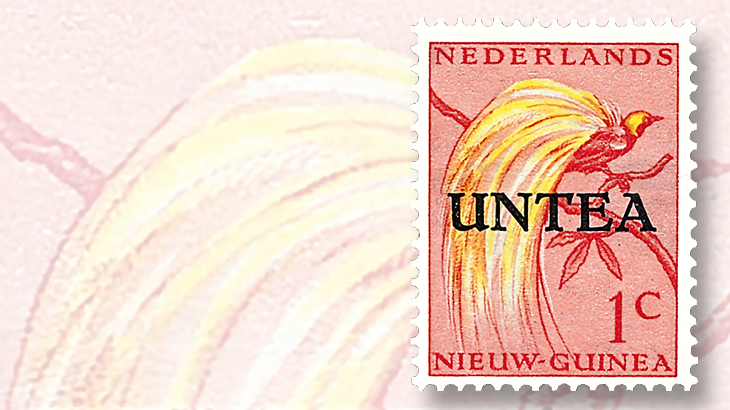 In May 1963, West New Guinea became part of Indonesia and was named Irian Barat. At first, overprints such as this “UNTEA” (United Nations Temporary Executive Authority) were added to Netherlands New Guinea issues. 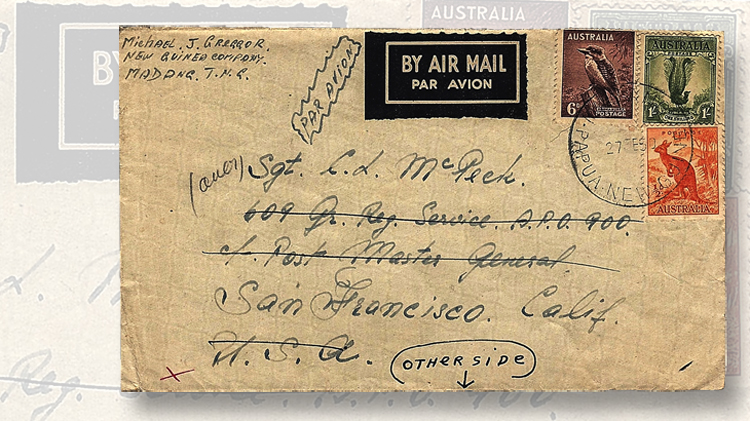 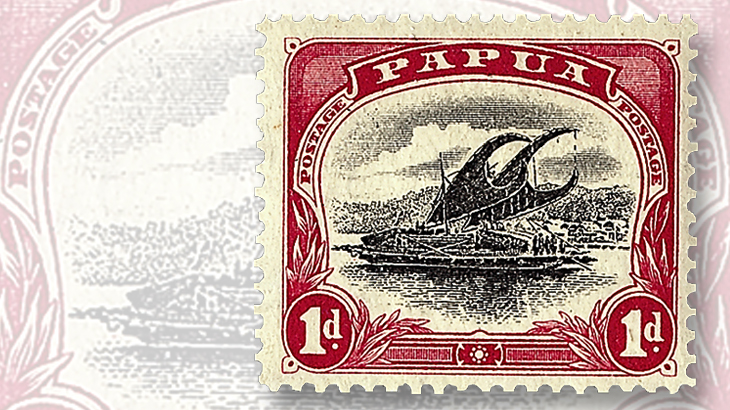 In 1908, overprinted British New Guinea stamps were replaced by issues that read “Papua” in a banner above the lakatoi design. 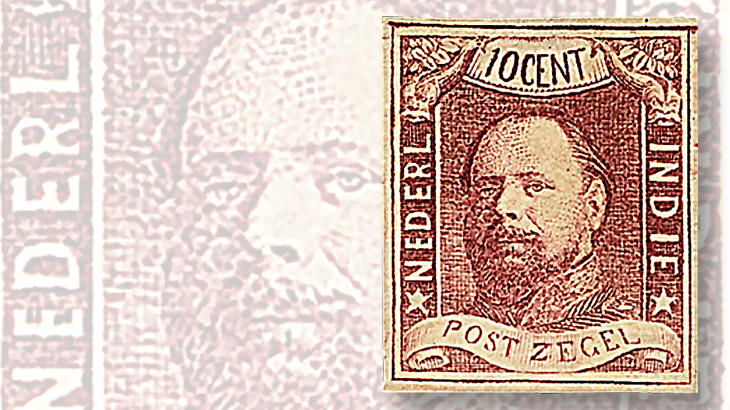 The first issue of Netherlands Indies, in 1864, portrays King William III. The Dutch had claims on the island of New Guinea as early as 1825. 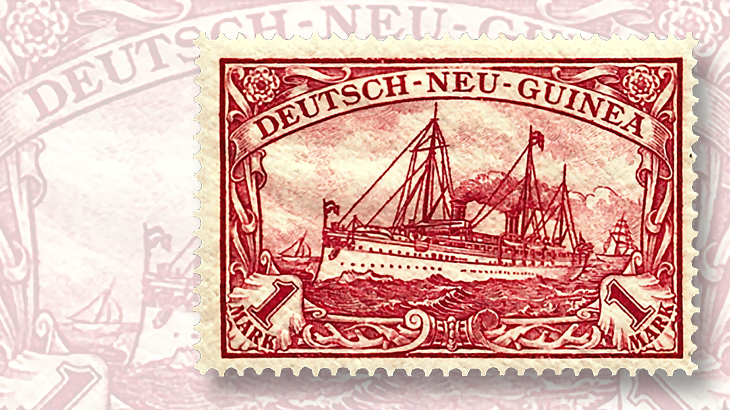 Germany issued new stamps for Deutsch Neu Guinea in 1901, picturing Kaiser Wilhelm II’s yacht, the Hohenzollern. These stamps were in continuous use until 1919. 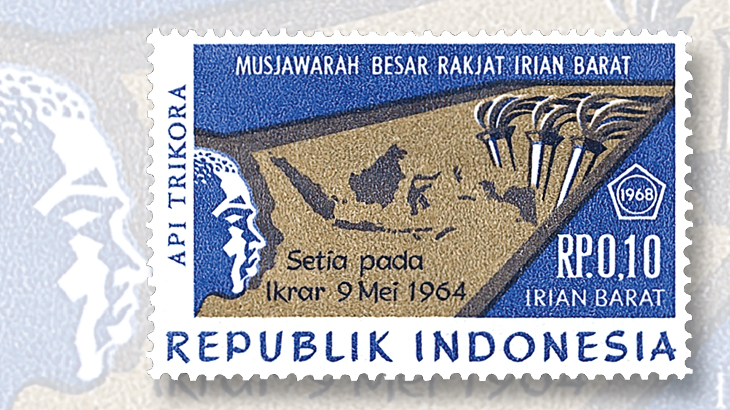 The unification of Irian Barat (formerly West New Guinea) and Indonesia was celebrated with a stamp issued in 1968. 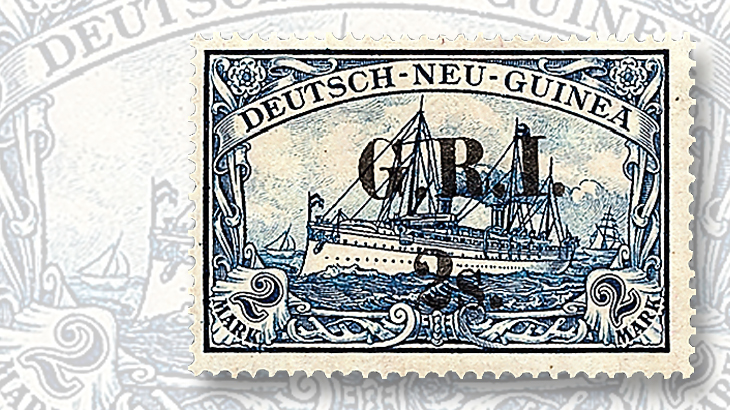 Deutsch Neu Guinea was handed over to Australia in 1914 and became New Britain. The existing Germany stamp issues were overprinted “G.R.I.,” an abbreviated Latin reference to the British King George V. 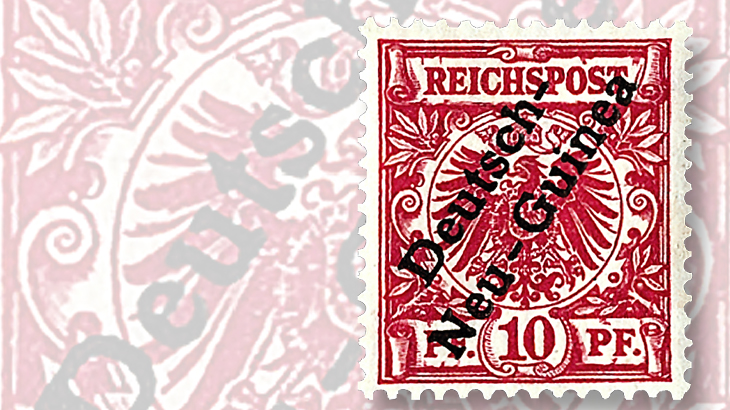 Germany competed with Australia for New Guinea at the end of the 19th century. Germany stamps such as this 1897 issue were overprinted “Deutsch-Neu-Guinea” for use in New Guinea from 1897-1899. 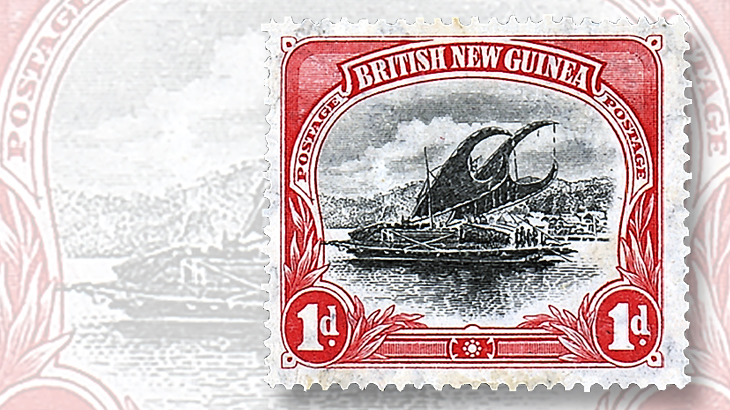 An indigenous sailing vessel called a lakatoi was depicted on British New Guinea’s first stamps, in 1901. 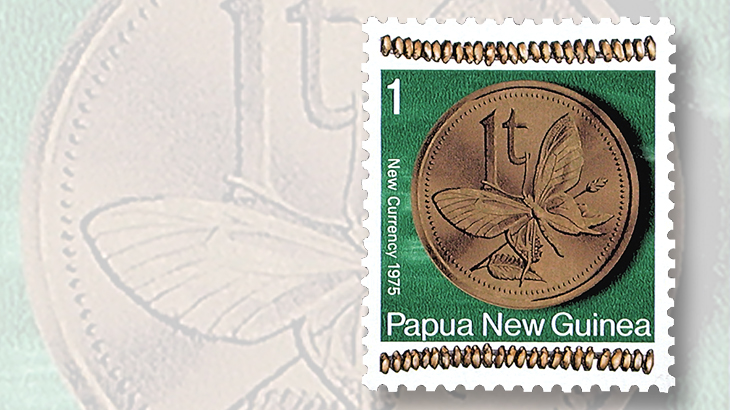 The much-disputed territory was renamed Papua New Guinea in 1972, and replaced its use of Australian currency in 1975. The new coinage appeared on a set of five stamps, starting with Scott 410. 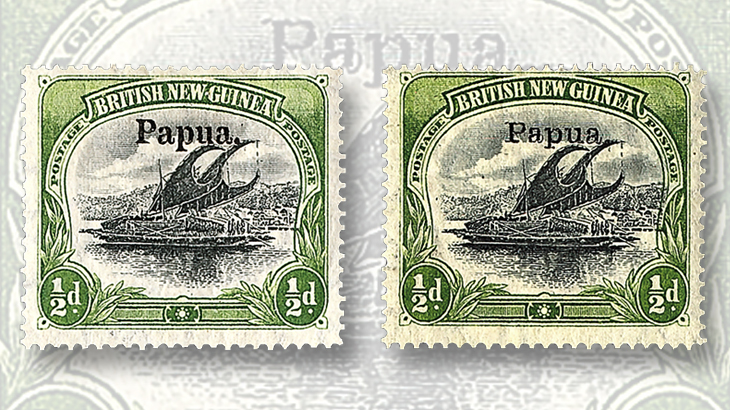 British New Guinea was renamed the Territory of Papua in 1906, and existing stamps were overprinted “Papua.” with a period at the end. The overprint was made smaller and the period dropped in 1907. 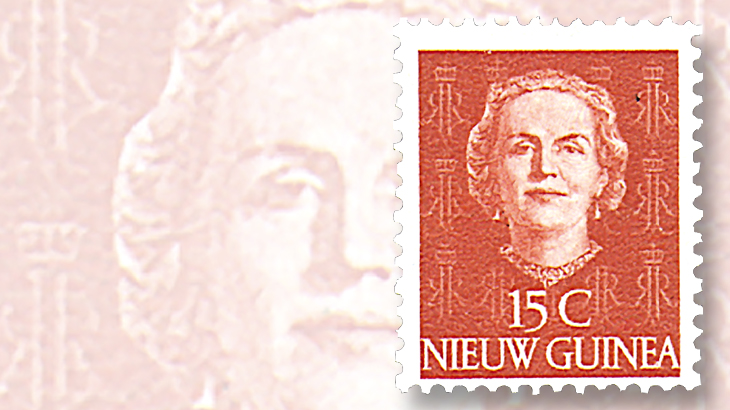 The Netherlands Indies resumed issuing stamps for Netherlands New Guinea in 1950, including this 15¢ Queen Juliana stamp, Scott 10.
Previous
Next

It is fascinating for most people to learn how nations evolve, and even more so for stamp collectors, who can document a nation’s changes through its postal issues. New Guinea is a good example.

New Guinea is the second largest island in the world, after Greenland.

The Netherland Indies included more than just the western half of the island of New Guinea.

Illustrated nearby is the first stamp issued by Netherlands Indies. It was used in New Guinea as well as Sumatra, Java, part of Borneo, the Moluccas, Celebes, and other small islands within the parameter of the Dutch East Indies.

In the 1870s, several European countries became interested in New Guinea, especially when news circulated telling of riches to be found on the island.

In order for the Netherlands to protect its claim on the Netherlands Indies, a line was set at the 141st meridian east, to mark the division between West (Dutch) New Guinea and areas annexed by Germany and Great Britain. Germany stamps overprinted “Deutsch-Neu-Guinea” were used in New Guinea from 1897 to 1899.

New stamps were issued in 1901 specifically for Deutsch Neu Guinea, picturing Kaiser Wilhelm II’s yacht, Hohenzollern. Stamps of this design were in continuous use until 1919.

In 1901, British New Guinea received its own postage stamps featuring a beautiful image of an indigenous sailing vessel (a sort of double dugout canoe) called a lakatoi.

Finally, in 1908, the banner above the lakatoi was redesigned to read “Papua,” and until 1952 all the stamps for the Territory of Papua were inscribed “Papua.”

On Sept. 11, 1914, in Australia’s first military engagement of World War I, Australian troops ousted a German garrison defending the most powerful wireless station in the Pacific, at Bitapaka on the Gazelle Peninsula of northeastern New Guinea.

The Germans capitulated and Australia was assigned a mandate by the League of Nations to govern the area that had been German territory.

Deutsch Neu Guinea stamps were overprinted for use in “New Britain.” The overprint was “G.R.I” (for the Latin Georgius Rex Imperator, referring to King George V) and surcharges were in pence and shillings.

During World War II, Japan conquered nearly all of New Guinea with the exception of the extreme southeast coastline. During the occupation, civilian post offices were closed, and this explains why the Scott Standard Postage Stamp Catalogue has no stamps for West or East New Guinea during the World War II period. Japanese soldiers used army post offices, and Allied soldiers fighting in New Guinea also used military post offices.

Post-World War II Australian stamps were used within the Territory of Papua and New Guinea until 1953. A cover from that period is illustrated here, franked with three Australia stamps and postmarked at Madang, Papua New Guinea, on Feb. 27, 1950.

The Netherlands Indies resumed issuing stamps for Netherlands New Guinea in 1950. However, after an aggressive disagreement with Indonesia, in August 1962 the Netherlands relinquished the disputed territory to the United Nations, as a trust territory.

The stamps carried both country names: Republik Indonesia and Irian Barat. A 1968 stamp (Scott 48) highlighted the unification of West Irian and Indonesia.

(Note that West Irian stamps appear in the 2016 Scott Standard catalog in Vol. 1, following the United Nations listings, and in Vol. 3, following Indonesia.)

In 1972, the territory was permanently (one hopes) renamed Papua New Guinea, often referred to simply as PNG. A few years later, in 1975, Papua New Guinea changed from Australian dollars and cents to kina and toea. That year, a set of five stamps (PNG Scott 410-414) celebrated the new coinage.

While it isn’t always easy tracing all of the political and geographic changes that can happen in any nation, it sure is fun finding the relevant stamps to demonstrate the history. Give it a try!