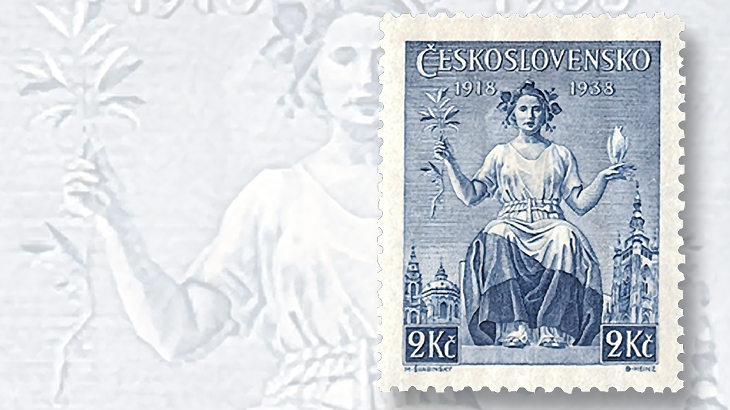 One of Czechoslovakia’s greatest artists, then and now, Max Svabinsky, designed the 1938 stamp commemorating the country’s 1918 declaration of independence. It is called the Allegory of the Republic.

The 10th anniversary, in 1928, was commemorated by a stamp set depicting buildings and the first president of the republic, Tomas Masaryk. Those issued for the 20th anniversary valiantly but poignantly illustrated peace, using an allegorical female figure holding aloft an olive branch in her right hand and a dove on her upturned left palm.

Why poignant? Well, because Czechoslovakia in late 1938 was far from being a happy and peaceful place. Since coming to power in 1933, Adolf Hitler sought nothing but to extend German tyranny across Europe. On Sept. 17, 1938, taking advantage of unrest among the German minority in the Sudetenland areas of northern, western and southwestern Czechoslovakia, Hitler imposed forceful military action to annex that part of Czechoslovakia to Germany.

On Sept. 30, Hitler met with Benito Mussolini, French Premier Edouard Daladier and British Prime Minister Neville Chamberlain (note the absence of a Czech participant) and the result was the Munich Agreement, which gave the Sudetenland to Germany. Chamberlain returned home and told the British people that he brought “peace with honor,” that the agreement had purchased “peace for our time.” In the long run, of course, Chamberlain was very wrong, but in the short run, Czechoslovakia was doomed.

This event marked the end of the Czech First Republic. On Oct. 1, 1938, Germany took the Sudetenland, comprising about one-third of Czechoslovakia’s territory (and its defensible border with Germany) and population, and the majority of its coal, iron, steel and electrical power resources. The Second Republic lasted only 169 days, ending on March 15, 1939, with the German invasion.

The anniversary issues in December 1938 shared a single design with two different denominations and colors: Scott 253 was a 2-koruna stamp printed in light ultramarine and 254 was a 3k stamp in pale brown. The same allegorical design also was used on a souvenir sheetlet issued in December 1938, containing a dark blue semipostal stamp (Scott B153) bearing a 2k(+8k) denomination, with the 8k surtax earmarked for national refugee relief.

The Allegory of the Republic design was by the distinguished Czech artist Max
Svabinsky (1873-1962), considered one of the founders of Czech modern art but also a wood engraver, graphic artist and designer of stained-glass windows with classical themes, among other artistic endeavors.

The building visible on the right in the background of the 1938 stamp design, St. Vitus (also known as St. Guy) Cathedral in Prague, contains a stained glass window of Svabinsky’s design. The domed building on the left of the stamp is the Church of St. Nicholas, also in Prague.

Svabinsky had designed several earlier stamps for Czechoslovakia, beginning with a set on March 3, 1920 (Scott 61-64) for the 70th birthday of President Masaryk. Another portrait of Masaryk by Svabinsky was used on Czech definitive stamps of 1925-26.

The prolific Svabinsky produced designs for some 70 stamps in all, and was himself honored with a Czech issue in 1958 for his 85th birthday, depicting his engraving The Artist and the Muse (Scott 877).

Svabinsky is still considered one of the greatest Czech artists, and was even honored with a Google “doodle” on the search engine’s homepage on Sept. 17, 2013, the artist’s 140th birthday.

The 1938 Allegory of the Republic design was engraved by one of the great and famous Czech engravers, Bohumil Heinz (1894-1940), who produced stamps for his native country, Great Britain and colonies, Greece and Sweden, as well as banknotes for 16 countries.

The Allegory of the Republic stamps credit the two artists by the addition of tiny lettering “M. Svabinsky” and “B. Heinz” at left and right below the denominations on the design.

The stamps were produced by the Czech Graphic Union in Prague.

Adding the 1938 Czechoslovakia Allegory of the Republic stamps to your collection would require a very modest outlay: the 2016 Scott Classic Specialized Catalogue of Stamps and Covers 1840-1940 values mint examples of Scott 253 and 254 at only 30¢ and 50¢, respectively, and the souvenir sheetlet, Scott B153, at $4.

For an additional 60¢ or so you also might wish to acquire a stamp-on-stamp version of the 1938 issue, whose design was used on a Czech Republic 5.40k stamp (Scott 3163) in 2002, recalling the tradition of Czech stamp production.