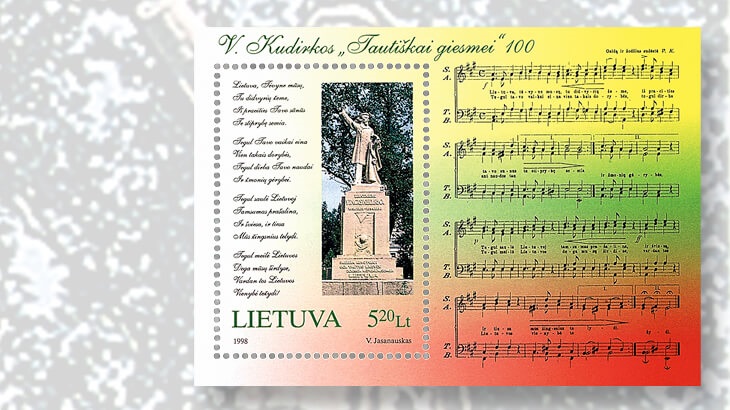 A 1998 Lithuania 5.20-litas souvenir sheet commemorating the centenary of the Lithuanian national anthem (Scott 595). The statue of Vincas Kudirka and the words of his poem appear on the stamp. The words and music of the anthem are seen in the selvage aga 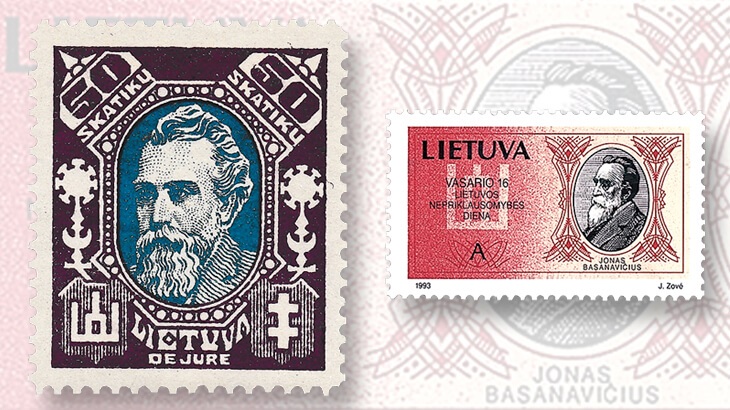 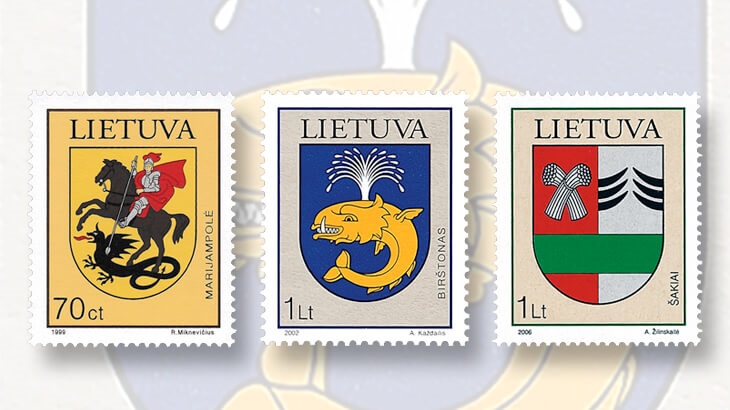 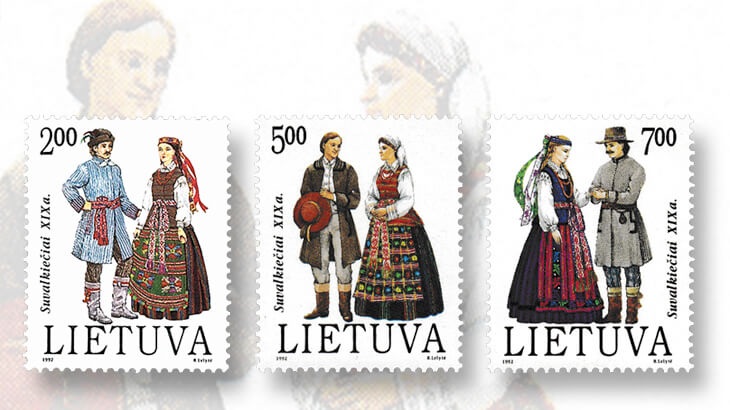 In 1992, shortly after regaining its independence after 50 years of captivity in the Soviet Union, Lithuania began a series of stamp issues celebrating traditional 19th-century dress in the country’s five ethnographic regions.

Lithuanian has affinities with Sanskrit, Greek, and Latin. The five ethnographic regions of Lithuania each have their own distinctive dialects, customs, and traditions coming from the various tribes who originally settled the areas. Today, standard Lithuanian is closest to the dialect of Suvalkija.

The ancestors of the Lithuanians arrived on the shores of the Baltic Sea in northeastern Europe perhaps as early as 3,000 B.C. The Lithuanians were the last pagans of Europe, not converting to Christianity until the 14th century.

In the 14th century, Lithuania was the largest country in Europe, stretching from the Baltic Sea to the Black Sea and as far east as present-day Kiev.

Lithuania has a long history of political, religious, and cultural affiliation with Poland.

Suvalkija lies in southwestern Lithuania, ranging from the Nemunas River in the north to the borders of Poland and the Russian exclave of Kaliningrad to the west and south.

The region was settled by the Sudovian tribe of Lithuanians, and it is sometimes known as Sudovia. The Sudovians were one of the largest and most warlike of the Lithuanian tribes. The area was a battleground during the Crusades carried out by the Teutonic Knights against the pagan Lithuanians.

As a result, Suvalkija was only sparsely settled until after the Crusaders were finally defeated at the Battle of Zalgiris (Grunwald in German) in 1410. Due to the Polish Partitions, Suvalkija was part the Russian Empire in the 19th century.

As part of Congress Poland, an area ruled directly by the czar, Suvalkijans had advantages in education and commerce and were among the best educated and wealthiest peasants in the 19th-century Russian Empire.

They had the highest literacy rate of any peasants in the Russian Empire. Like the Scots, Suvalkijans have a reputation for thriftiness.

A popular anecdote says that when it is cold Suvalkijans sit in front of a candle to keep warm. And if it gets really cold, they light the candle.

Because of the relative wealth of the Sulvalkijan peasants, their traditional clothing was richer and more colorful than that of other regions. In addition to wool, common to all, their clothes were often made of finer materials such as damask, silk, and brocade.

Suvalkija has the most fertile farmland and is the least forested region of Lithuania. The largest city in Suvalkija is Mariampole. It is Lithuania’s seventh largest city, with a population of about 50,000.

The city crest of Mariampole, which can be seen on the Lithuania 70-centas stamp issued in 1999 (Scott 642), depicts St. George slaying the dragon.

Other cities of Suvalkija whose crests have appeared on Lithuania’s stamps include Birstonas (Scott 717) and Sakiai (814).

Kaunus, Lithuania’s second largest city, is not considered to belong to any of the ethnographic regions, although technically that part of the city on the south bank of the Nemunas River lies in Suvalkija.

The most noted Lithuanian to hail from Suvalkija is undoubtedly Jonas Basanavicius (1851-1927).

A medical doctor and ethnographer, Basanavicius began publishing Ausra, the first Lithuanian-language newspaper, in 1883. He also founded the Lithuanian Scientific Society and was elected its first president.

During the Revolution of 1905, he organized the Great Seimas of Lithuania, which demanded autonomy from Russia.

On Feb. 16, 1918, he was one of 20 signatories to the Lithuanian Declaration of Independence. He has been commemorated on several postage stamps of Lithuania, both before and after the Soviet occupation.

Vincas Kudirka (1858-1899) is also a native son of Suvalkija. He was a physician and poet, and was the author of the Lithuanian national anthem.

In 1898, he published the poem Tautiska Giesme, which would later be adopted as the lyrics of the Lithuanian national anthem. He also wrote the music to accompany the words.

He died young of tuberculosis. Kudirka has been commemorated on several Lithuania stamps.