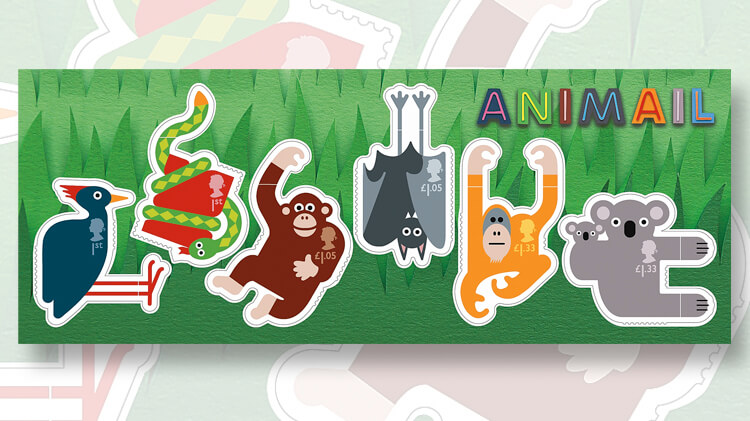 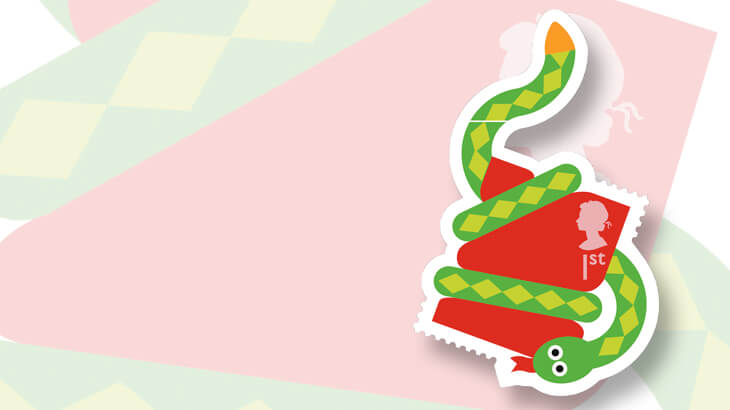 The Snake stamp in Great Britain’s Animail issue is designed so that when it is used as postage, part of its tail will hang off the envelope. The white line on the tail indicates where to line up this self-adhesive stamp with the edge of the envelope.
Previous
Next

New cut-to-shape postage stamps from Great Britain’s Royal Mail are designed to cling to the edge of envelopes and postcards.

The stamps feature animals, and in a play on words, the new issue is called “Animail.”

The six stamps were issued May 17 in a single souvenir sheet.

In announcing the stamps, Royal Mail said: “Featuring six endearing animal characters that thanks to special die cutting will wrap around an envelope or cling on to a postcard, these are perfect for adorning a piece of mail and making someone smile before they have even opened the envelope.”

The design firm Osborne Ross designed the stamps, using illustrations by Andrew Ross. His other designs for Royal Mail include cut-to-shape stamps in the 2003 Fruit and Vegetables issue (Scott 2108-2117).

Royal Mail said that in designing the Animail stamps Ross was given the challenge “to devise interactive stamps that particularly appealed to children and encouraged them to brighten up their letters and cards.”

Royal Mail continued: “He came up with the idea of engaging, friendly and fun animal characters that could ‘cling’ to the top or side of envelopes. He wanted to create a variety of shapes and colours to generate interest but was mindful that each character had to sit comfortably alongside each other and have a degree of consistency so that they clearly looked like they were part of a set.”

Ross also had to consider technical aspects, such as if the stamps could be easily read by sorting machines.

Starting on the left of the souvenir sheet the first two stamps show a woodpecker and snake, respectively. Both stamps are nondenominated, paying the first-class domestic rate (currently 64 pence).

The next two stamps featuring a chimpanzee and a bat. They are denominated £1.05 to pay the rate for Europe up to 20 grams and the international rate up to 10 grams.

The two stamps denominated £1.33 for international mail up to 20 grams depict an orangutan and a koala mother and her joey.

For those using the stamps on mail, instructions on the back of the sheet explain how to use the white line or lines that appear on each stamp to position the stamp so that part of the animal extends past the edge of the envelope. For example, on the Snake stamp the white line divides its tail in two, so that the lower part of the tail would hang off the edge of the envelope.

Royal Mail’s other products for the Animail set include first-day covers, a presentation pack, and seven postcards reproducing the designs of the six stamps and the souvenir sheet.

The presentation pack includes mint examples of the stamps and a game called “Jungle Post.”