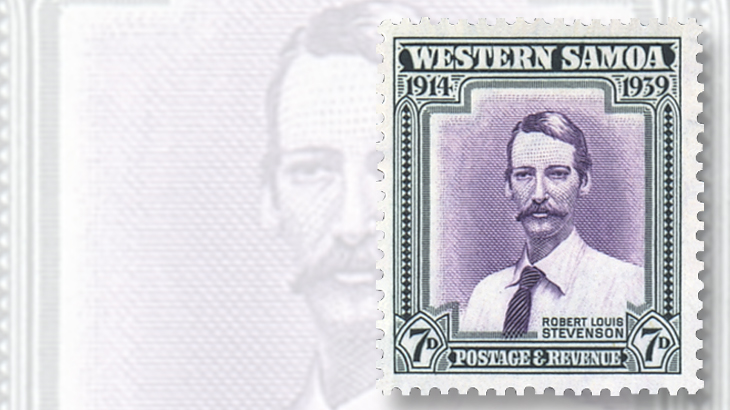 Author Robert Louis Stevenson, commemorated on a stamp in 1939 from his adopted home, Samoa.

Robert Louis Stevenson, the author of Treasure Island and Strange Case of Dr. Jekyll and Mr. Hyde, was born Nov. 13, 1850, in Edinburgh, Scotland. Issues with his fragile health resulted in sporadic school attendance, but he enjoyed writing stories, leading to his eventual success as an author.

As his professional writing career began, he traveled to the United States in 1879, where he married his American-born wife, Frances (Fanny) Matilda Van de Grift Osbourne. The couple returned to Europe with Fanny’s son from an earlier marriage, and while struggling with his ever-precarious health, Stevenson wrote some of his most acclaimed novels: Treasure Island (1883), Strange Case of Dr. Jekyll and Mr. Hyde (1886), Kidnapped (1866), and The Master of Ballantrae (1889), as well as a number of short stories and other longer works.

The family returned to the United States in 1887, but left for an extended voyage in the South Seas the following year. After settling in Samoa, Stevenson died at age 44 on Dec. 3, 1894.

Stevenson’s worldwide popularity has seen him honored on stamps from several countries. Samoa, where he made his final home, has commemorated Stevenson and his works on multiple issues. The 1939 7-penny stamp (Scott 184) features a portrait of the author, on a stamp marking the 25th anniversary of New Zealand’s control of the mandated territory of Western Samoa.