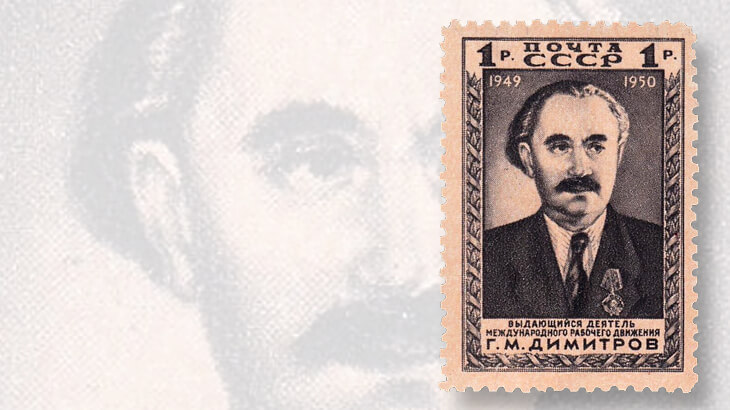 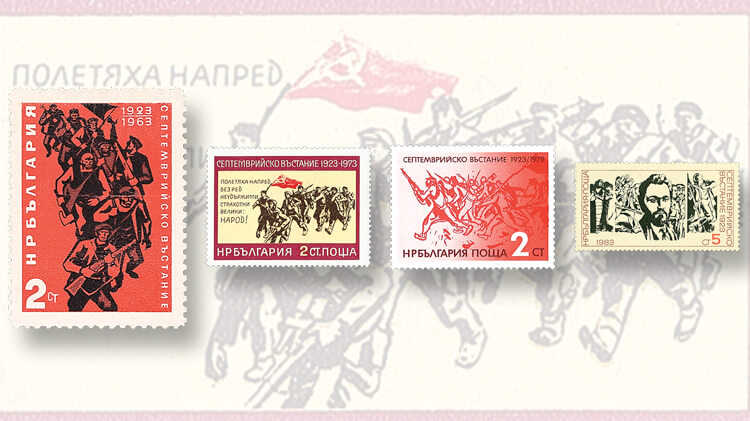 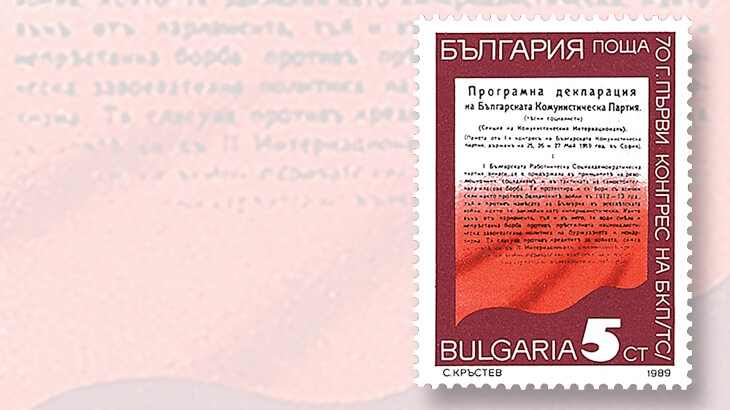 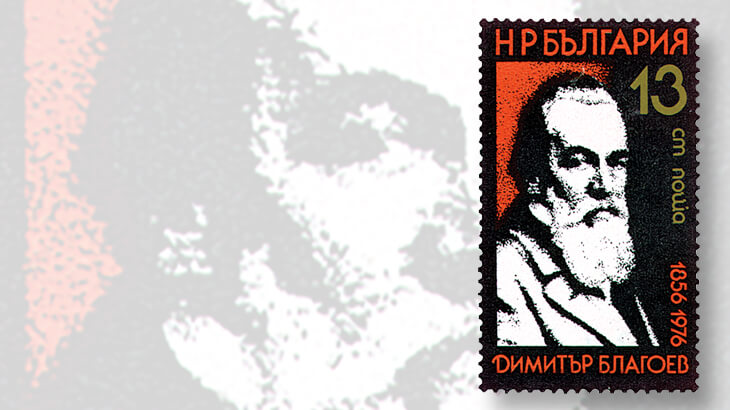 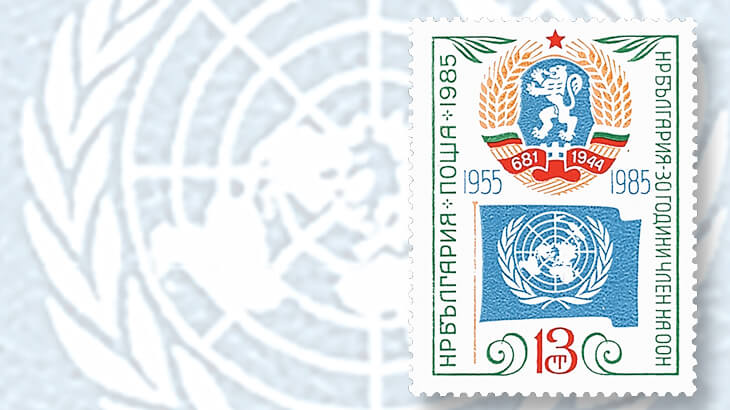 The crest of the Bulgarian Communist Party can be seen in the upper half of the design of this 1985 13-stotinki 30th Anniversary of the Admission of Bulgaria to the United Nations stamp (Bulgaria Scott 3074).
Previous
Next

Bulgaria is located in the Balkan Peninsula on the Black Sea, bordering Turkey, Romania, Serbia, Macedonia and Greece.

Bulgaria, being a small country with relatively little immigration to the United States, is not on the radar of many American stamp collectors.

However the inquisitive and interested can learn a great deal about Bulgarian history and culture from its stamp issues.

Like much of the rest of the Balkan population, Bulgarians are ethnically and linguistically Southern Slavs and religiously Eastern Orthodox Christians. Bulgaria has close historical, cultural, linguistic and religious ties to Russia, and it was one of the chief beneficiaries of Russian Slavophilism and Panslavism.

Russia was a constant champion of Bulgarian interests in the councils of the Great Powers. Russian support was key in helping to free Bulgaria from the Ottoman Empire in the 19th and early 20th centuries.

With Russian help, Bulgaria became an autonomous principality of the Ottoman Empire in 1878 and proclaimed full independence in 1908. Bulgaria issued its first postage stamps on May 1, 1879.

Bulgaria was on the winning side in the First Balkan War (1912-13), virtually doubling its territory at the expense of the Ottoman Empire. But attacking its erstwhile allies in the Second Balkan War (1913) proved disastrous, and Bulgaria lost much of the territory it had gained.

In an effort to recoup its losses, Bulgaria went with the Central Powers in World War I, which was another big mistake. The victorious Allies imposed the punitive Treaty of Neuilly-sur-Seine on Bulgaria, which added to the general hardships of the period between the World Wars.

As called for by Marxist-Leninist ideology, a wave of communist revolts swept Europe in the wake of World War I. Urged and directed by the Comintern (the Third International based in Soviet Russia) headed by Grigory Zinoviev, communist revolts were quickly defeated in Berlin, the Baltic States and Poland, but gained some temporary success in Munich, Finland and Hungary. One of the last of these was the 1923 September Revolt in Bulgaria.

The Bulgarian Communist Party (BCP) held its first party congress in 1919. A Bulgarian 5-stotinki stamp commemorating that congress (Scott 3416) is shown nearby.

The BCP crest can be seen in the top half of the design of the 1985 13s 30th Anniversary of the Admission of Bulgaria to the United Nations stamp (Scott 3074) shown here. The stamp is perforated gauge 13½.

The BCP came in second in the first elections to the Sobranie (parliament) in 1920. Until 1923, the government was dominated by the Agrarian Peasant Party, led by Alexander Stamboliski.

Stamboliski was no democrat. He ruled through violence and intimidation. In 1923, he decided to further enhance his power by purging and suppressing his closest rivals, the communists.

Ironically, the Bulgarian military used Stamboliski’s attack on the communists as the pretext for a coup on June 9, 1923, in which Stamboliski was murdered and the Peasant Party was removed from power and purged. Reprieved by the military coup, the BCP stood idly by while their Agrarian Peasant Party oppressors were liquidated.

Even more ironically, Zinoviev and the Comintern leadership in the Soviet Union were furious with the BCP’s failure to join the Peasant Party in resisting the coup.

What the BCP saw as a reprieve, their Soviet masters considered a missed opportunity to seize power. To atone for their errors, the Comintern ordered the BCP to immediately stage a revolt and seize control of Bulgaria.

The founder and first leader of the BCP was Demeter Blagoev (1856-1924). Blagoev counseled that such a revolt had no chance of succeeding. He tacitly defied the Comintern by refusing to participate in what he considered to be a suicidal, futile gesture.

Many Bulgarian stamps have been issued to commemorate Blagoev. He is seen on the 13s stamp (Scott 2331) perforated gauge 13, which is illustrated nearby. The stamp was issued May 28, 1976, to commemorate the 120th anniversary of his birth.

With Blagoev refusing to participate, leadership and planning for the revolt fell to two younger communist leaders, Georgi Dimitrov and Vasil Kolarov.

With the Comintern breathing down their necks, the Central Committee of the BCP tentatively scheduled the start of the revolt for October or November of 1923. But the government got wind of the revolt and began arresting BCP members on Sept. 12.

Goaded on by the Comintern, the BCP staggered into a poorly coordinated and virtually unplanned revolt on Sept. 14. Attacks and uprisings were sporadic beginning on Sept. 14 in some areas, but not kicking off until as late as Sept. 20 in others.

Following the example of Blagoev, most communists in Sofia, the capital, who had not already been arrested did not rise at all. The military and the government had little trouble in crushing the uprising.

As the revolt spluttered and failed, Dimitrov and Kolarov fled to the Soviet Union, leaving their hapless followers to fend for themselves in the shambles of their failure.

Zinoviev blamed the BCP for the fiasco, saying that the uprising had failed because it had provided “insufficient Bolshevization of the masses.”

In post-World War II communist historiography, the September Uprising became a titanically heroic struggle instead of the half-hearted opera bouffe affair that it really was.

The ill-fated event was commemorated repeatedly on Bulgarian stamps issued during the period of communist rule (1946-90).

In exile in the Soviet Union, Dimitrov became a Soviet citizen and was rewarded for his loyalty in following orders.

In September 1932, he was appointed secretary general of the World Committee Against War and Fascism, a Comintern front organization that worked with other communist parties to further the aims of the Soviet Union.

In 1933, he was arrested in Berlin, Germany, and tried for complicity in setting the Reichstag fire. His cool defiance of the Nazi kangaroo court won him admiration worldwide. In 1934, Stalin appointed him head of the Comintern, a post he held until 1943.

A Soviet 1950 1-ruble Georgi Dimitrov stamp (Russia Scott 1473) is illustrated nearby. The gray-black stamp on salmon-colored paper, perforated gauge 12½, was issued on the first anniversary of his death.