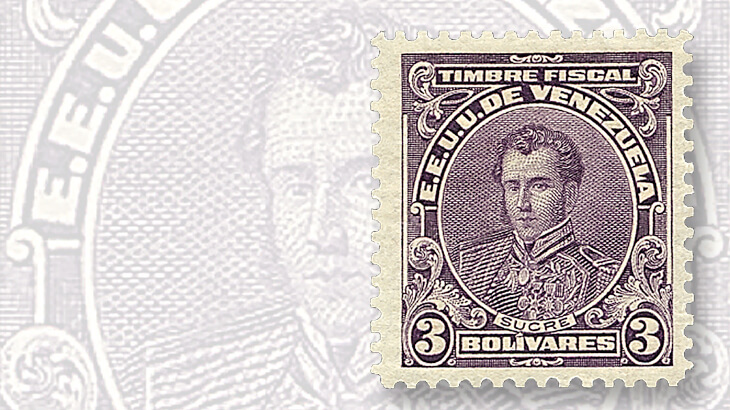 A shortage of stamps for postal use in Venezuela in the 1800s resulted in an official decree authorizing the use of revenue stamps for inland postal use.

We announce this week the publication and availability of the 2017 Scott Classic Specialized Catalogue of Stamps and Covers 1840-1940.

Among the almost 700 new number changes and additions in the latest edition of the Scott Classic Specialized catalog is a new section for postal fiscal stamps that has been added to the Venezuela listings.

Postal fiscal stamps might cause collectors to scratch their heads and ask whether these stamps are postage stamps or revenue stamps. The answer is that they are revenue stamps used for finanacial purposes to collect taxes or for registration, but they also are authorized for postal use.

Linn’s columnist Janet Klug described similar stamps for New Zealand in her Stamps Down Under column in February.

Let’s get fiscal with stamps doing double duty: postage and revenue: There are stamps that carry the mail, stamps that pay taxes and fees, and stamps that do both.

Postal fiscal stamps of Venezuela are complicated. For example, listed among the definitive (regular-issue) stamps are Scott 22-36. As the footnote for this set states, “These stamps were made available for postage and revenue by official degree, and were the only stamps sold for postage in Venezuela from Mar. 1871 to Aug. 1873.”

An editor’s note in the Scott catalog explains, “After July 1, 1895, stamps inscribed ‘Escuelas’ or ‘Instruccion’ were no longer used interchangeably as postage or revenue stamps, although they continued to be used provisionally when regular postal stocks were depleted.” So the confusion continues.

In 1900, the Simon Bolivar stamps of 1899 (Scott 142-148) were overprinted for regular postage (Scott 150-155) and for fiscal, or revenue, use, and this is where the new listings for postal fiscal stamps begin in the 2017 Scott Classic Specialized catalog as Nos. AR1-AR26. The stamps bear the same overprints as the regular-issue stamps, Nos. 150-155 and 156-160, but the stamps that the overprints were applied to are Nos. 128-135, which were inscribed “INSTRUCCION.” The stamps used for the regular-issue overprints are Nos. 142-149, which are inscribed “CORREOS DE VENEZUELA.”

The regular issues and postal fiscals of classic Venezuela offer many collecting opportunities. Collectors are cautioned that Scott catalog values for revenue stamps of the 1800s used as postage are for stamps with pen cancels. Be aware that stamps with pen cancels removed are sometimes offered as unused stamps. Fraudulent postal cancels also are known to exist.