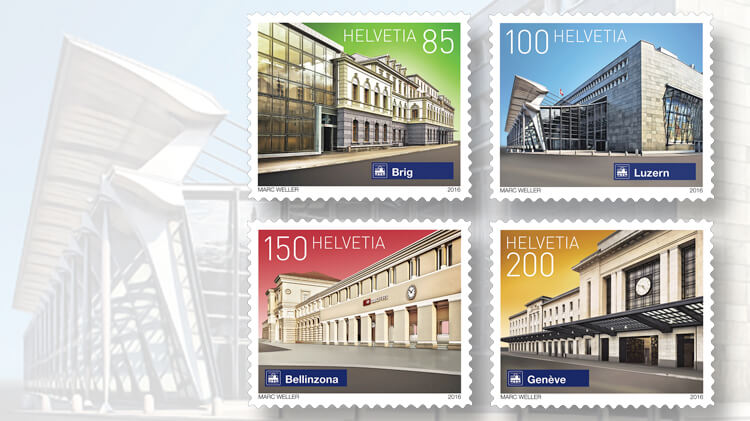 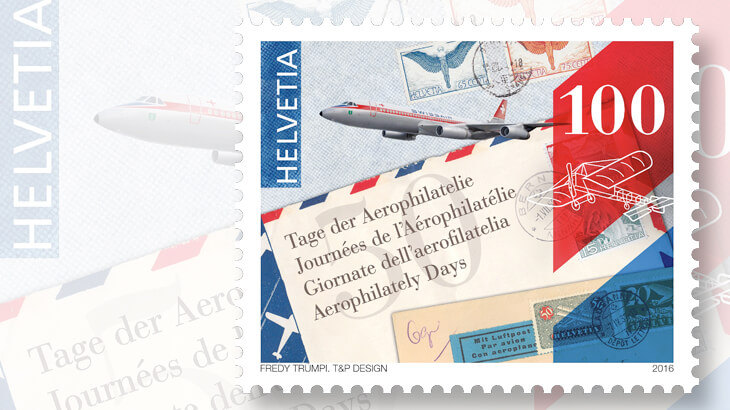 A Swiss commemorative honors the 50th Aerophilately Days held in October at the Swiss Transport Museum.
Previous
Next

On Sept. 8, Switzerland introduced a new series of definitive stamps and also issued a commemorative stamp with an aerophilatelic theme.

For example, the covers shown at the top and bottom of the stamp’s design were franked with stamps from Switzerland’s 1923-25 airmail set, or from the 1933-37 issue of the same designs with grilled gum.

The stamp on the cover in the middle is partially obscured by the red panel with the denomination in it (100 centimes or 1fr).

Fredy Trumpi of T & P Design created the design for the Aerophilately commemorative.

Gutenberg AG of  Schaan, Liechtenstein, printed it by offset in small panes of six. Additional images related to aerophilately are shown in the selvage of the pane: a hot air balloon, zeppelin, helicopter, airplanes, and airmail covers and markings.

Swiss Post reports that all current definitive stamps will be replaced by Swiss Railway Stations stamps by 2018, adding that there will no longer be different themes for small, regular and higher denominations.

A 5.30fr stamp picturing the Basel Railway Station is scheduled to be issued Nov. 17, according to the fourth quarter issue of Swiss Post’s magazine for collectors Focus on Stamps.

That report also said: “Ten more stamps featuring small and medium-sized stations run by various railway companies are still to come over the next two years. In turning the spotlight on this vital area of Swiss public transport, the series pays homage to the densest railway network in the world.”

Marc Weller designed the Swiss Railway Stations stamps, and Joh. Enschede of the Netherlands printed them by offset in panes of 10.

In addition to the aforementioned stamps, Swiss Post issued two souvenir sheets and a semipostal stamp Sept. 8. The sheets feature laser-cut technology and a Roman bridge in Verzasca Valley, respectively, and the semipostal raises money for victims of compulsory social measures and forced fostering prior to 1981.