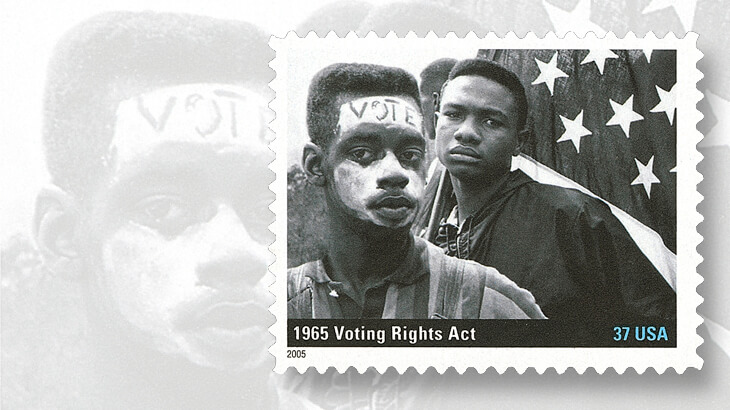 A stamp in the To Form A More Perfect Union pane honors the 1965 Voting Rights Act and pictures a photograph of young men on the Selma march. The pane was issued in 2005. 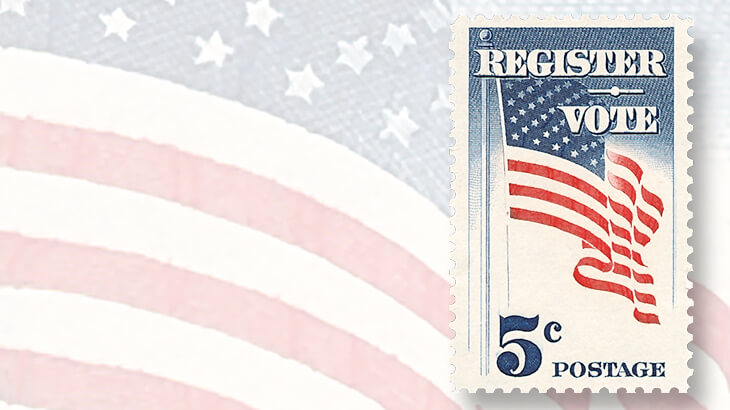 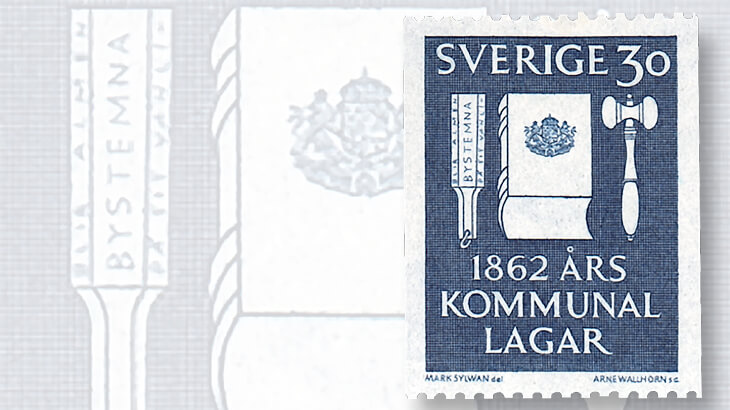 A voting tool is pictured on the left of this 1962 Swedish 30-krona stamp marking the 100th anniversary of municipal reform laws. 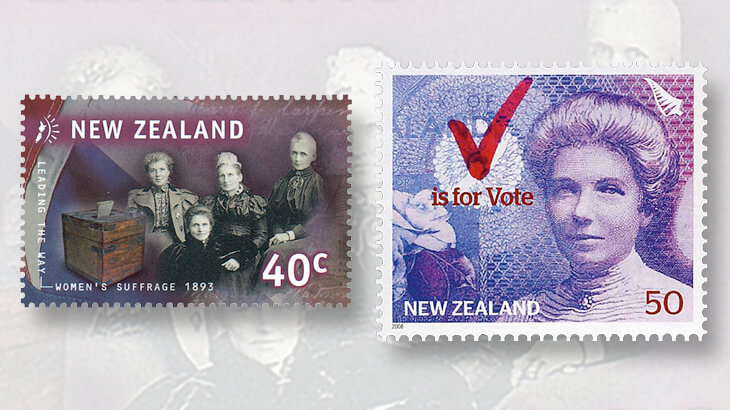 In 1893, New Zealand became the first country to grant women the right to vote. The stamp on the left honors the 100th anniversary. The “V is for Vote” stamp on the right is from a pane featuring the letters of the alphabet. 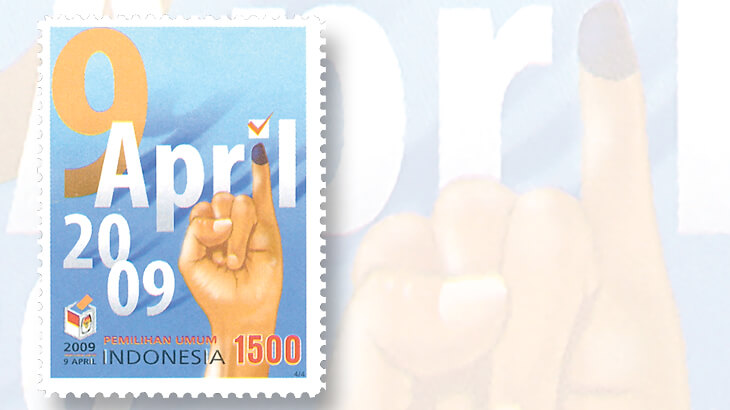 A 2009 stamp from Indonesia shows a finger stained with election ink. 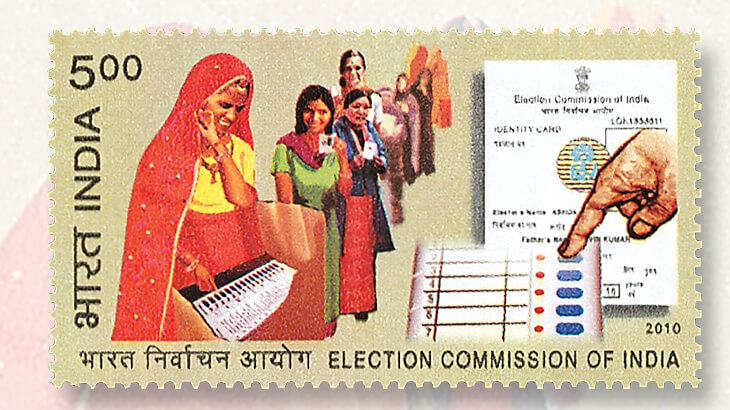 India commemorated the 60th anniversary of its election commission on this 5-rupee stamp issued Jan. 25, 2010. 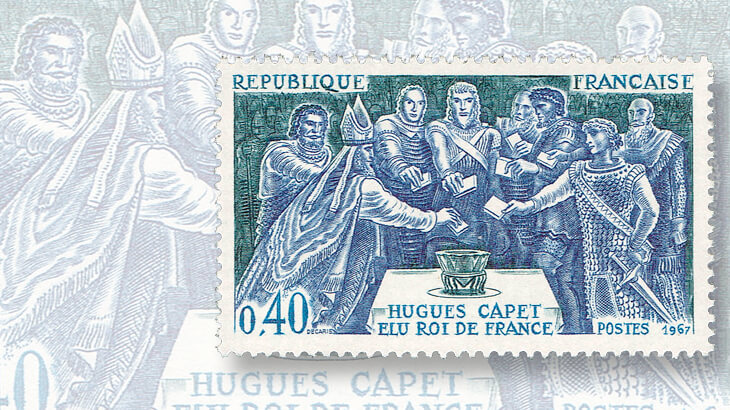 A stamp from France pictures noblemen electing Hugh Capet as king in 987. 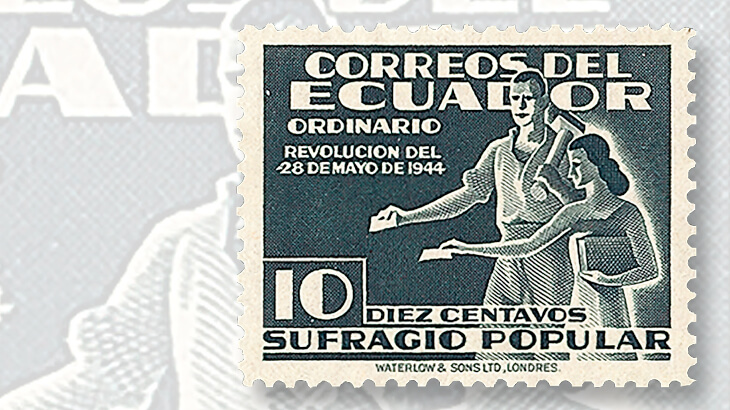 The theme of this 1946 stamp from Ecuador is popular suffrage. The stamp marks the second anniversary of the May 28, 1944, revolution. 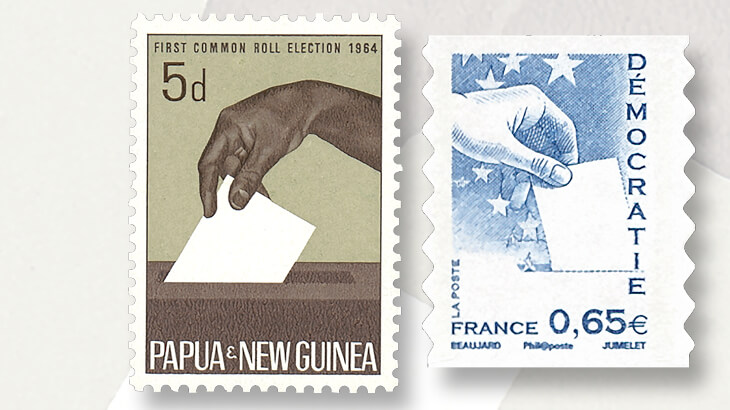 The designs of these stamps from Papua New Guinea and France depict one hand putting a vote in a ballot box. 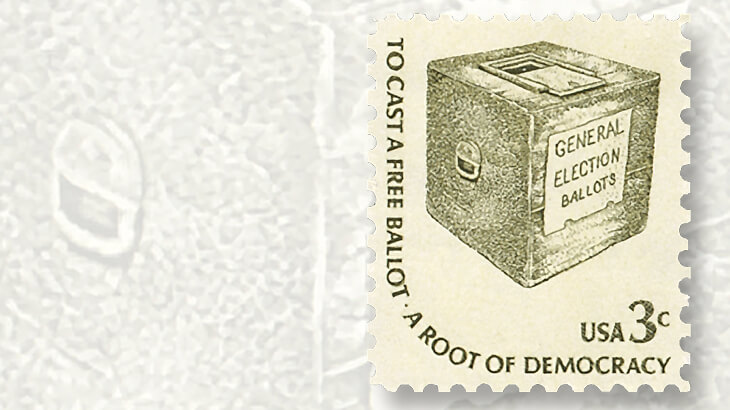 The 3¢ stamp in the 1975-81 Americana series features a ballot box.
Previous
Next

With the upcoming United States presidential election on Nov. 8, the topic of voting seems to be almost everywhere, even on postage stamps.

While a few foreign postal administrations have commemorated the current election on stamps, there are many other ways voting has been portrayed on stamps.

In this column, I will share a few examples that show ballots or ballot boxes, picture other methods of voting, or include the word “vote.” All three are represented on stamps from the United States.

A 1949 3¢ stamp commemorating the first gubernatorial election in the territory of Puerto Rico (Scott 983) depicts a farmer holding a cogwheel in one hand and a ballot box in the other. Luis Munoz Marin won this election, which was held Nov. 2, 1948.

Another ballot box is shown on the Celebrate the Century stamp honoring the 19th amendment (Scott 3184e). Ratified Aug. 18, 1920, this amendment granted women the right to vote.

In addition to showing a woman placing her vote in a locked ballot box, the design of this 32¢ stamp also includes the word “VOTE” written in large capital letters. The stamp was issued May 28, 1998, in the pane highlighting events of the 1920s.

The word “vote” can be found twice on the 1970 6¢ Woman Suffrage stamp marking the 50th anniversary of the 19th amendment (Scott 1406), but in much smaller letters.

The stamp for the 1965 Voting Rights Act (3937b) reproduces Bruce Davidson’s photograph Youths on the Selma March, in which one of the young men has the word “Vote” painted on his forehead.

Many foreign stamps commemorate voting rights, particularly women’s suffrage. For example, New Zealand, the first nation to grant women the right to vote, doing so in 1893, has issued at least seven stamps in commemoration that show a ballot box or have the word “vote” on them.

A 1968 New Zealand stamp marking the 75th anniversary (Scott 412) depicts the arms of a man and a woman placing their votes in a ballot box.

In 1999, New Zealand Post honored “entrepreneurs, innovators and trailblazers” on the six stamps in its Leading the Way issue. The design of the 40¢ Women’s Suffrage stamp (Scott 1622) includes a wooden ballot box.

Kate Sheppherd is among the suffragists pictured on the stamp. She is shown again on a stamp inscribed “V is for Vote” (2201v) in the 2008 A to Z of New Zealand pane of 26.

One of the earliest stamps with a voting scene was issued in 1938 by Switzerland (Scott 246). This 10-franc definitive with a green background pictures a line of men waiting to vote, a few who have already voted, and one man casting his vote.

In 1946, Ecuador issued four stamps marking the second anniversary of the Revolution of May 28, 1944. The 10-centavo stamp in that set (Scott 459) is inscribed with the Spanish equivalent of “Popular Suffrage,” and shows a male laborer and a female student with ballots in hand.

Other historical elections were commemorated long after the fact.

A 1962 set of three from Sweden marks the 100th anniversary of municipal reform laws. Among many other things, these 1862 laws called for the election of city councils and granted certain unmarried women the right to vote in municipal elections. All three stamps share the same design depicting a voting tool, a code of law, and a gavel (Scott 610-612).

On a 1967 stamp, France commemorates an election held almost a thousand years earlier, in 987. The design shows the assembly of noblemen preparing to cast their votes to elect Hugh Capet as king of the Franks.

Voting in the 21st century

Jumping ahead to the 21st century, Bhutan held its first elections March 24, 2008, and issued a 225-ngultrum CD-ROM stamp Feb. 21, 2009, to commemorate the occasion (Scott 1438). The design shows a photograph of people waiting in line to vote; the banner behind them reads “Voting for happiness.” The information on the CD also is about the election.

In addition, one stamp depicts a cartoon pencil placing a red check in a box on a ballot, and another pictures a hand with the little finger covered in election ink.

This ink serves as a protection against voter fraud. After voting, a person’s little finger is dipped in this special ink, which does not wash off for a couple of days.

India pictures its voting methods on a 5-rupee stamp issued Jan. 25, 2010, to mark the 60th anniversary of the Election Commission of India (Scott 2396).

Depicted on the left side of the design is a woman voting, while the people waiting in line behind her hold up their identity cards. A close-up of the touch-activated voting device and an identity card are shown on the right.

One vote, one box

I have mentioned only a few of the stamps related to voting, but they help illustrate how large and varied such a topical collection could be.

To keep such a collection more manageable, you could focus on elections of just one country or region, a certain type of election, suffrage, elections that have changed history, methods of voting, or simply the ballot box.

Stamp designs have depicted ballot boxes in numerous ways, but one of the most popular is a single hand placing a vote. This type of design has represented everything from historic elections, such as Papua New Guinea’s first national election in 1964 (Scott 182) to democracy, as shown on French definitives of 2008 (3472, 3476).

The American Topical Association offers many resources for topical collectors, including checklists that are available to its members. The election/voting checklist includes 250 listings.