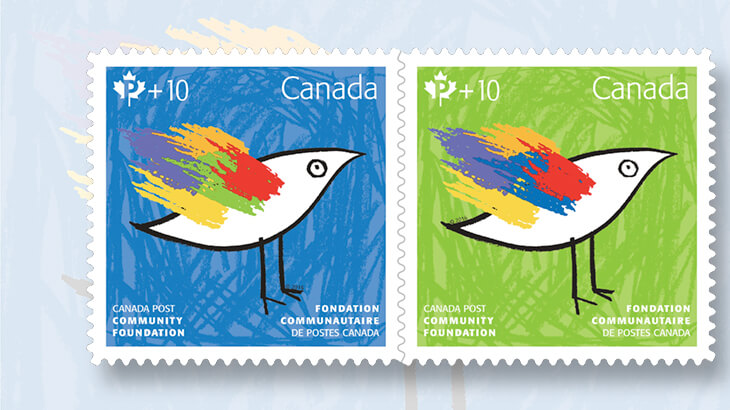 The stylized birds on this new pair of Canadian permanent-rate + 10¢ semipostal stamps represent the idea that to soar successfully, young ones often can use a helping hand.

The self-adhesive, nondenominated permanent “P” stamps pay Canada’s basic domestic letter rate, currently 85¢, with a 10¢ surcharge added to support a charity, indicated on the stamp by “+ 10” following the “P.”

A $1 donation from each 10-stamp booklet sold goes to the Canada Post Community Foundation, funding a wide range of programs to benefit Canadian children and youth.

Funds raised through semipostal stamp sales, along with donations from Canada Post customers and employees, allowed the foundation to grant $6 million to 369 community projects since 2012.

Canada Post reported that the birds represent “positivity, playfulness, energy, and hope,” adding that they are a “metaphor for children who may need a little help in order for their dreams to take flight.”

Five of each stamp design, configured as se-tenant (side-by-side) pairs as shown, are included in the booklet of 10, currently priced at $9.50.

Lowe-Martin printed the stamps by seven-color offset lithography on Tullis Russell paper in a quantity of  1.5 million stamps (150,000 booklets). The stamps are square, 32 millimeters by 32mm.

Canada Post has created two official first-day covers, one showing a brave little bird in the air (for the blue-background stamp), the other a whimsical flock of birds awaiting their turns (for the green stamp). A total of 8,000 of each of the two FDCs will be made available, both with an Ottawa, Ontario, first-day pictorial cancel showing a bird nesting on a heart.