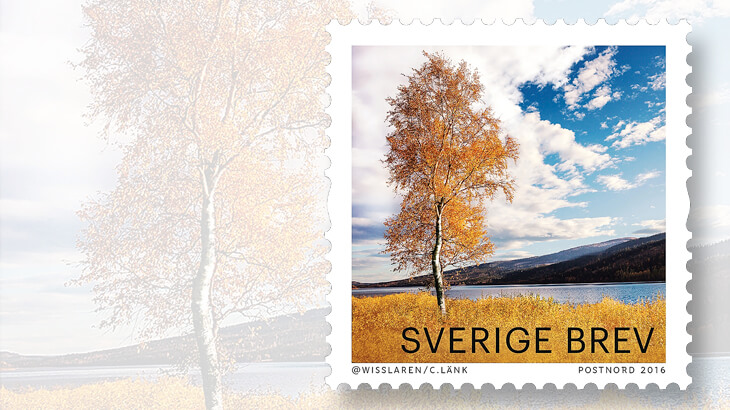 Sweden’s new Autumn Glow issue, which includes this coil stamp plus a booklet of five, showcases the photography of Christoffer Collin. 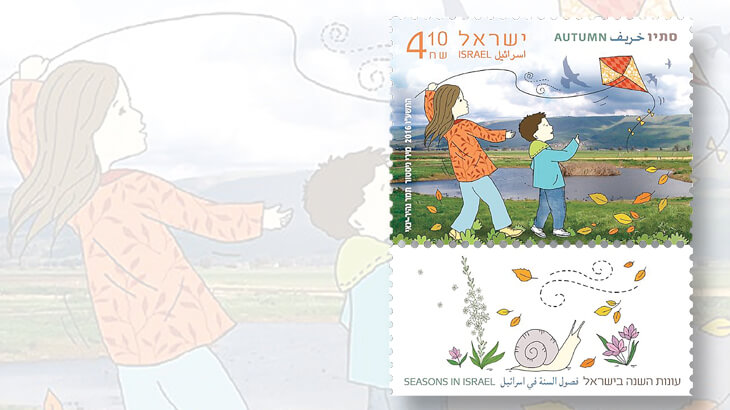 The design of this Seasons in Israel stamp shows children taking advantage of the autumn breeze. The stamp will be issued Sept. 13. 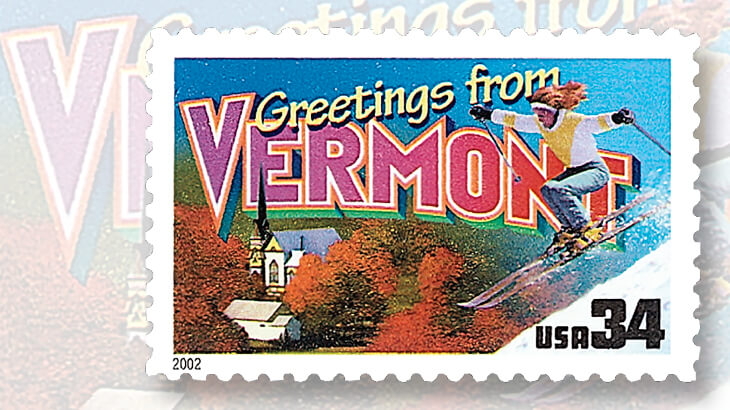 The Greetings from Vermont stamp includes a scene of autumn in New England. 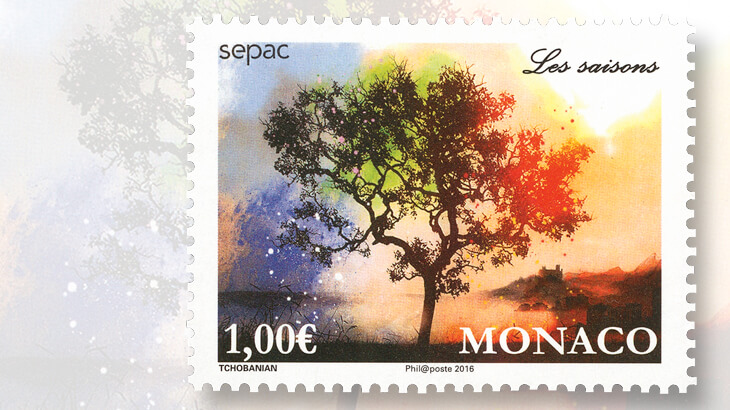 A tree for all seasons is pictured on this stamp from Monaco, part of the 2016 Sepac mulitnation series. 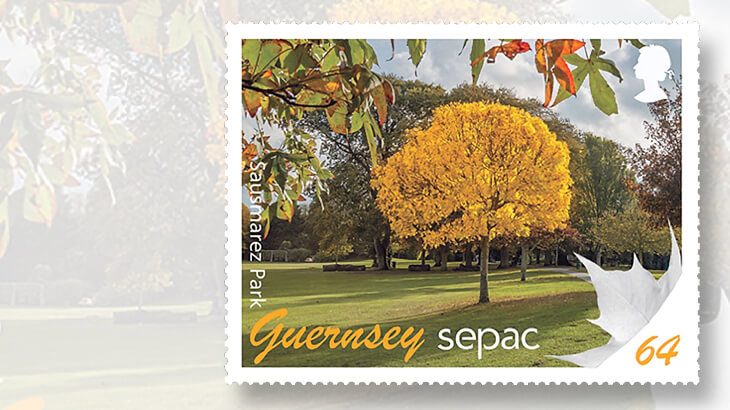 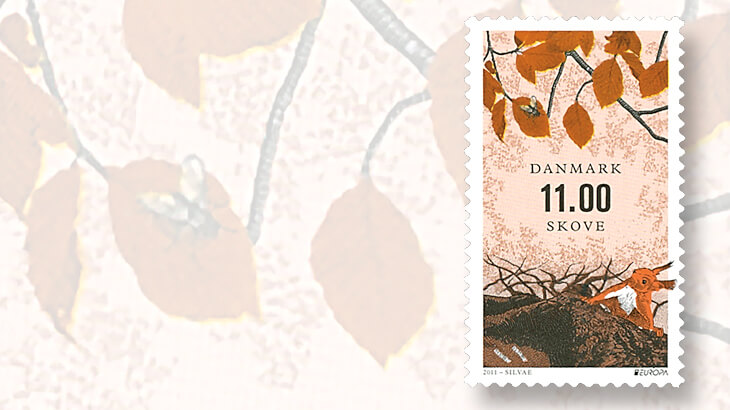 A squirrel and leaves are pictured on a Danish Europa stamp issued in 2011, the International Year of Forests. 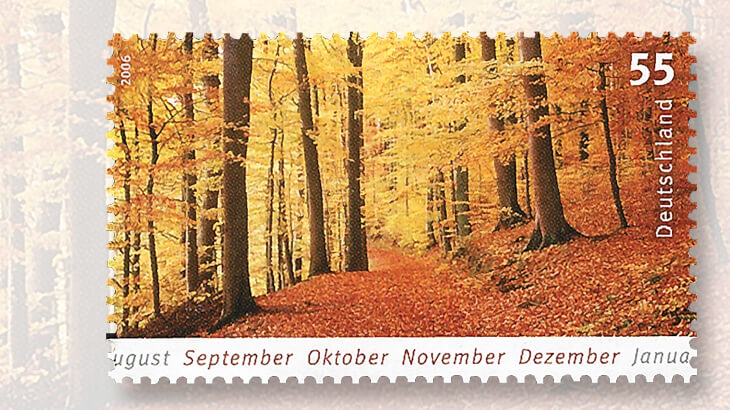 The months of autumn are outlined in dark orange at the bottom of this 2006 stamp from Germany. 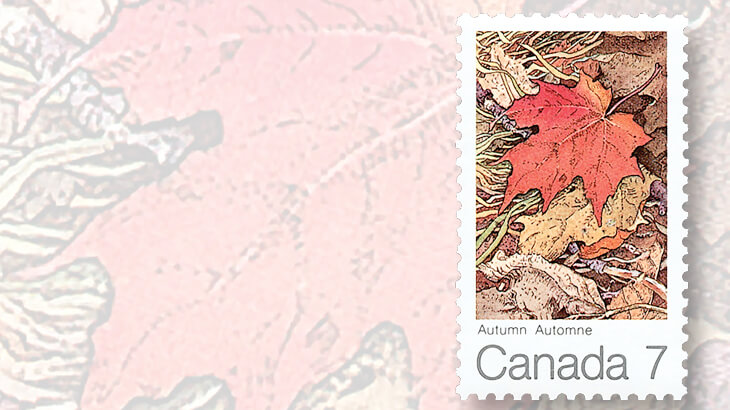 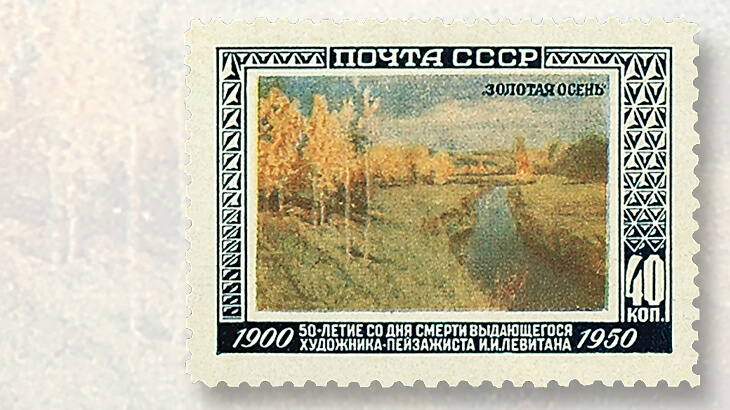 In 1950, Russia issued this stamp picturing Golden Autumn by Isaac Ilyich Levitan, who is known for his landscape paintings.
Previous
Next

“Autumn in Ohio is a feast for the senses. With a wide variety of trees, Ohio forests gradually begin to blaze with brilliant hues of red, gold and orange from September to mid-November … “ is how the Ohio tourism website begins its description of the fall season in this state.

In other areas, the leaves may start to turn sooner, or later, or in warm climates, perhaps not at all.

So if you are only seeing green leaves or bare trees during your afternoon drives, walks through parks or hikes in the woods, you can always open a stamp catalog to discover fall foliage on postage stamps. In addition, you can look through the Scott New Listings Update section of the monthly issue of Linn’s Stamp News to find new stamps that display the colorful topic of autumn leaves.

Many of the stamps featuring this season are inscribed with the word “autumn.” For example, a 1971 7¢ stamp from Canada bears that word in both English and French. This stamp is part of a series of four showing Canada’s national symbol, the maple leaf, in different seasons: The Spring stamp was issued April 14 (Scott 535), Summer June 16 (536), Autumn Sept. 3 (537) and Winter Nov. 19 (538). Canadian artist Alma Duncan (1917-2004) created the illustrations for this series.

Germany highlighted the relevant months of each season on four stamps issued in 2006. On the 0.55 stamp for autumn, the months from August through January are inscribed at the bottom with the four months that include parts of fall in a seasonal dark orange, matching some of the leaves in the design. This Autumn stamp was issued Oct. 5, 2006, in sheet form (Scott 2366) and Nov. 9, 2006, in a booklet of 20 (five stamps for each season, 2397-2400).

A United States stamp related to fall does not include the word as part of its design. On May 3, 2013, the U.S. Postal Service issued four nondenominated forever stamps showing the flag in the different seasons. The Flag in Autumn design depicts aspens covered with golden leaves behind the flag. Several varieties exist of the A Flag for All Seasons stamps.

Among the other U.S. stamps featuring the colorful trees of fall is one of four designs in the 2014 Hudson River School Paintings set. This forever stamp (Scott 4920) reproduces Distant View of Niagara Falls by Thomas Cole. Sugar maples are pictured in the foreground of this autumn scene.

One of the earliest stamps showcasing the season also is part of a set honoring artists and their works. Issued Dec. 6, 1950, this Russian stamp (Scott 1527) depicts Golden Autumn by Isaac Ilyich Levitan (1860-1900). This 1895 landscape painting shows a grove of birch trees.

A single yellow birch is featured on a new stamp just issued by Sweden Aug. 25. This coil stamp and a booklet of five self-adhesives comprise the set called Autumn Glow. The designs show photographs taken by Christoffer Collin, known to his 1.4 million Instagram followers by the user name @wisslaren. In addition to birch, the photos show maple, rowan and beech trees with their fall foliage.

Collin said: “Seeing my photos on stamps is really a lot of fun, but it is even more fun to be able to share the photos of the area around my hometown, Karlskoga. I like the connection between the digital media that I normally work with and the fact that the photos now can be sent as actual greetings to the entire world.”

Even more recent is an Israeli stamp issued Sept. 13, the fourth in a series called Seasons in Israel. The 4.10-shekel stamp is inscribed “Autumn” in the upper right, but the orange and golden leaves at the bottom of the stamp and on the attached tab (label) also indicate the season. The fall color scheme is continued in the sail of the kite and on the girl’s jacket. Shown in the background is the Hula Valley Nature Reserve from a photograph by Ilan Malester.

Two fall scenes can be found on stamps listed in this month’s Scott New Listings Update: an Icelandic stamp called Autumn Leaves (Scott 1408, issued April 28, 2016) and a stamp from Malta showing a woman at Buskett Gardens in autumn (1566, issued June 21, 2016).

The latter stamp is inscribed “Sepac,” indicating that it is part of the multination series organized by the Small European Postal Administrations Cooperations. Each year, member postal administrations issue Sepac stamps based on a central theme. The theme for this year’s series is the Seasons, so naturally some of the stamps focus on fall.

The Sepac issue from Malta also includes stamps with spring, summer and winter themes, although only the aforementioned stamp bears the inscription. Likewise, Iceland’s Autumn Leaves stamp is part of a set that shows spring flowers, butterflies in summer and snowflakes in winter. The Sepac inscription appears on the Spring Flowers stamp.

Autumn in Saumarez Park is pictured on the Sepac-inscribed stamp issued May 25 by the Channel island of Guernsey.

Monaco used a single tree to represent all four seasons on its Sepac stamp issued June 24. The golden colors of autumn are prevalent on the right side of this 1 stamp.

If you want to continue to search for autumn leaves on stamps, Finland and Japan are two good places to start. Several Finnish issues focus solely on the autumn season. Japan has issued several stamps with autumn themes and will be releasing five new Autumn Greetings stamps Oct. 25. Two of the designs depict a fox and rabbit, respectively, with red and gold leaves in the background.

However, autumn stamps aren’t limited to these two countries by any means. Some sets of stamps picture a particular region or place in all four seasons. For instance, a recent set of stamps from Romania is called Seasons at a Village Museum. They were issued May 20 of this year to mark the 80th anniversary of the Dimitrie Gusti National Village Museum.

Autumns colors also can be found on stamps that feature leaves, trees and forests. The American Topical Association offers to its members a tree checklist that includes more than 4,000 listings.

Sometimes, autumn leaves turn up in surprising places, such as on a March 14, 2013, issue from Liechtenstein that combines mathematics and nature (Scott 1568-1571); and other times, where they are found is more predictable, such as on a Danish stamp issued in 2011 (1530) honoring that year’s Europa theme of Forests, in conjunction with the International Year of Forests.