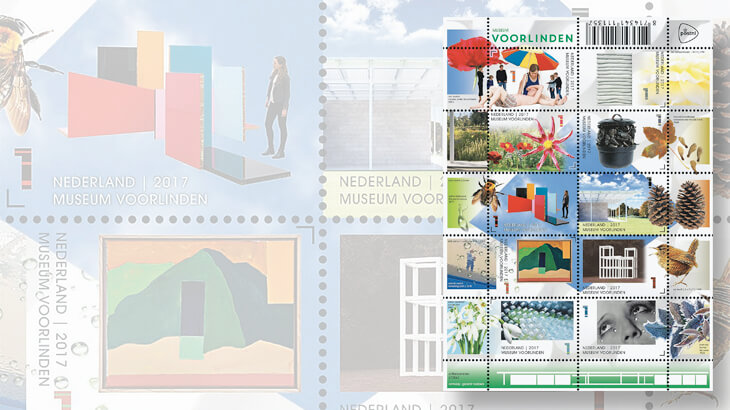 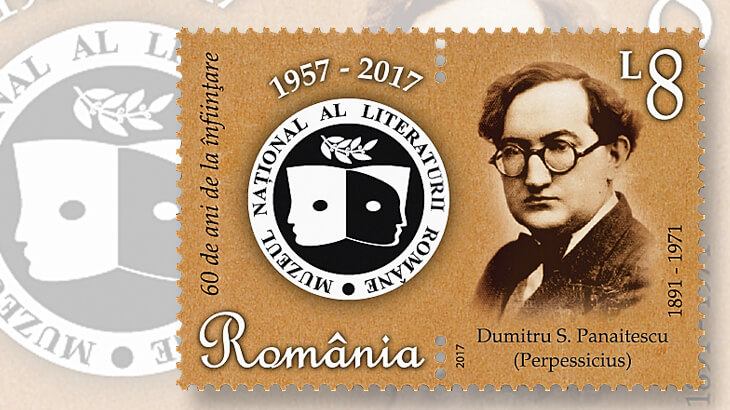 The National Museum of Romanian Literature was founded by Dumitru Panaitescu (his pen name was Perpessicius), who is depicted on this recent Romanian stamp honoring the museum on its 60th anniversary. 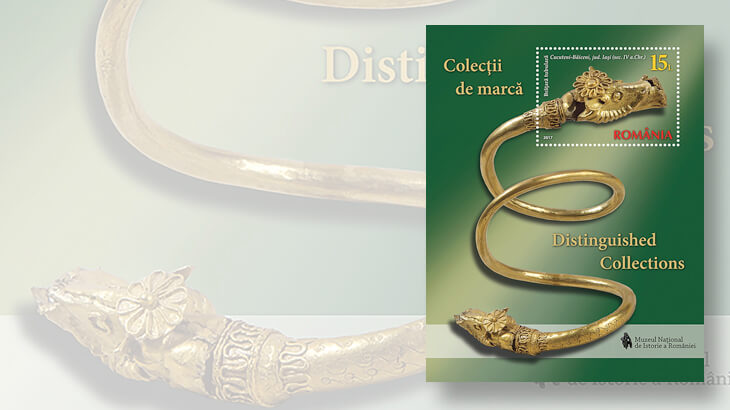 The golden bracelet pictured on this souvenir sheet is from the collection of the National Museum of Romanian History. 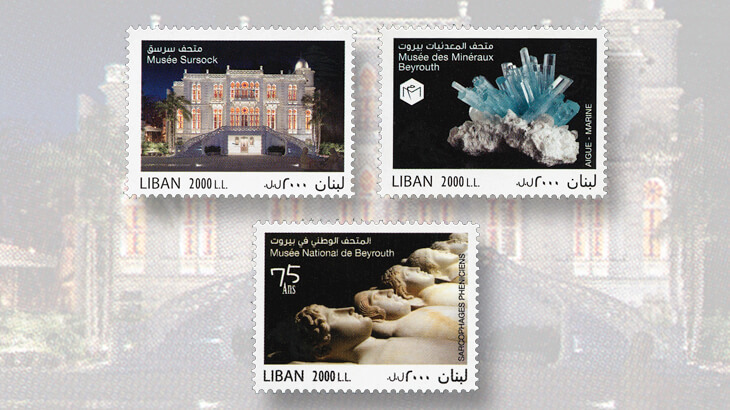 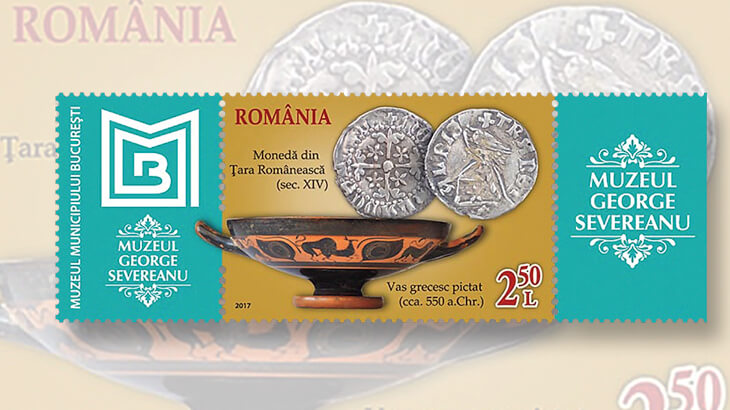 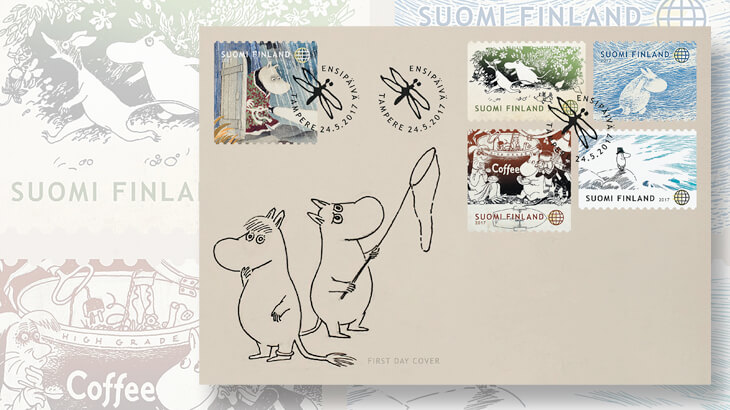 The first-day cover for Finland’s stamps commemorating the opening of a museum dedicated to the Moomins, fictional characters created by Tove Jansson.
Previous
Next

The Beirut National Museum states that more than 1,300 archaeological artifacts dating from prehistory to Ottoman times are on display there.

The museum officially opened May 27, 1942. It was closed during the Lebanese Civil War (1975-91) and after extensive reconstruction has opened in stages. Most recently, the basement was reopened to the public in October 2016.

The stamp honoring this museum shows a row of Phoenician sarcophagi on display in the basement galleries.

In an article about the museum’s reopening on Lonely Planet, Helen Elfer wrote: “One of the most hotly-anticipated displays is that carefully protected collection of 31 anthropoid sarcophagi. Discovered in Sidon, south of Beirut, they each have faces carved of white marble, thought to be portraits of the deceased.”

The stamp commemorating the Mim, a private mineral museum in Beirut, shows aquamarine crystals. Featuring the collection of Salim Eddie, this museum opened in 2013.

The other stamp depicts a nighttime photograph of the Sursock Museum, a modern and contemporary art museum that opened in 1961.

The museum’s website said: “The Nicolas Ibrahim Sursock Museum is housed in Nicolas Sursock’s former residence, built in 1912. The Museum’s architecture integrates Venetian and Ottoman elements that were typical in Lebanon at the turn of the century.”

Each stamp is denominated £2,000. Chemaly and Chemaly printed them by offset in sheets of 20.

A pane of 10 stamps from the Netherlands features Museum Voorlinden, a privately owned art museum, that opened in September 2016 in Wassenaar.

The pane was issued July 17. All of the stamps are nondenominated, with the numeral 1 indicating that they pay the basic domestic-rate for letters weighing up to 20 grams.

Gerard Hadders of Pro Arts Design designed the stamps. In addition to showing items from the museum, the designs depict the museum itself, nature photographs, and various other images, all arranged to represent the changing seasons.

The photographs were taken by Hadders. He said: “It’s a lovely museum with a great collection. To me, the most unique aspect of it is the fact that it is embedded in nature. Its glass walls make the gardens part of the museum’s collection. The landscape is bright inside, making the museum seem three times larger on the inside than on the outside.”

A booklet of stamps from Finland pays tribute to the first and only museum devoted to Moomins, fictional characters created by writer and illustrator Tove Jansson (1914-2001).

Moomin describes them: “The Moomin family and their friends live an adventurous life in the idyllic and peaceful Moominvalley in harmony with nature. They are a family of white and roundish trolls with large snouts.”

The stamp booklet was issued May 24, and the museum opened June 17 in Tampere Hall, Tampere, Finland.

The museum features Moomin drawings and paintings by Jansson and three-dimensional tableaux of various Moomin scenes created by Jansson and Tuulikki Pietila.

Ari Lakaniemi and Susanna Rumpu designed the stamps. They are nondenominated; the symbolic globe on each design shows they pay the international rate.

The designs represent various depictions of Moomins throughout the years, including scenes from Comet in Moominland, the second Moomin book, published in 1946; The Exploits of Moominpappa, 1950; Moominland Midwinter, 1957; and Moominpappa at Sea, 1965.

Joh. Enschede of the Netherlands printed these self-adhesive stamps by offset.

Museums of Romania are featured on three sets of stamps issued in May and June.

The first of these, issued May 17, commemorates the 60th anniversary of National Museum of Romanian Literature.

The logo makes another appearance on the 16-leu stamp in a souvenir sheet of one. The selvage of the sheet depicts handwritten stanzas of the poem To The Star by Mihai Eminescu (1850-1889).

A May 27 issue called Distinguished Collections pictures ancient jewelry from the National Museum of Romanian History.

For example, a souvenir sheet with a 15-leu stamp shows a fourth-century spiral bracelet with a ram’s head on both ends. This golden Dacian bracelet was uncovered in 1959 in the village of Berceni.

A set of six stamps and a souvenir sheet issued June 29 honors museums that are part of the Bucharest Municipality Museum network.

Some of these stamps show exterior views of the museums, and others depict objects contained in them.

The 2.50-leu low denomination features the museum in the house of George Severeanu, Romania’s first radiologist. Items from Severeanu’s collections of Greek pottery and coins are pictured on the stamp.

The museum’s main location, the Sutu Palace, is pictured on the 16-leu stamp in the souvenir sheet.

Mihail Vamasescu designed all of these Romanian stamps. They were printed by offset.