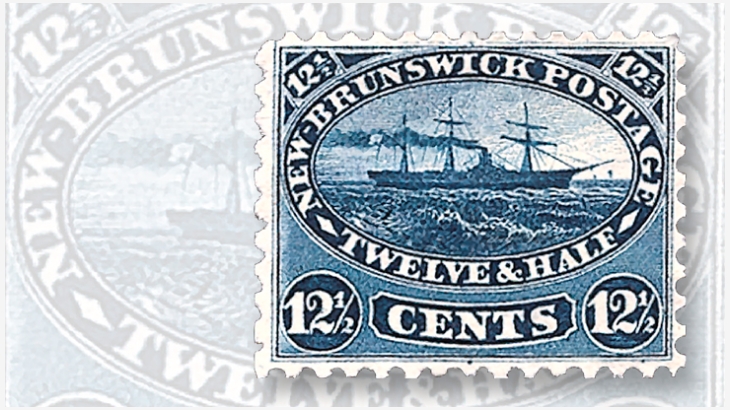 Stamp collectors often use the abbreviation “BNA” for British North America. Canadian provinces that issued their own stamps are British Columbia and Vancouver Island, New Brunswick, Newfoundland, Nova Scotia, and Prince Edward Island. Newfoundland, the last to join the Confederation of Canada, continued to issue stamps until 1949.

The market for BNA stamps is active, and there are bright spots here and there that are even better than the market in general.

There is fairly steady demand for the New Brunswick 12½¢ Steam and Sailing Ship stamp (Scott 10). The stamp comes from one of the more affordable Canadian provinces sets (Scott 6-11).

Issued during 1860-63, this was the first set to be denominated in the new decimal currency when the colony transitioned from pence, shillings, and pounds to dollars and cents. The 12½¢ stamp has cross-collector appeal with ships topical stamp collectors. The 2017 Scott Classic Specialized Catalogue of Stamps and Covers 1840-1940 values it in unused original gum condition at $100 and in used condition at $75. It is valued in mint never-hinged condition at $200.

On this stamp, the margins are small because the design takes up most of the stamp’s face. Many examples have perforations near or cutting into the stamp design. For very fine stamps without faults, these are good prices. Stamps in lower grades or with small faults sell at appropriate discounts from catalog value.