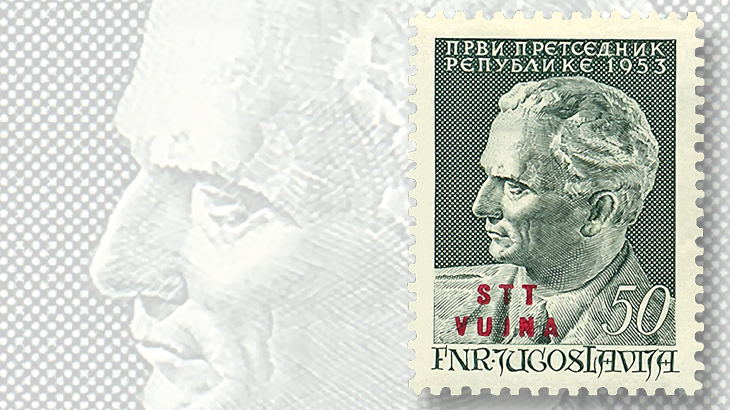 New images of Yugoslavia – Trieste stamps have been added to the 2018 Scott Standard catalog. 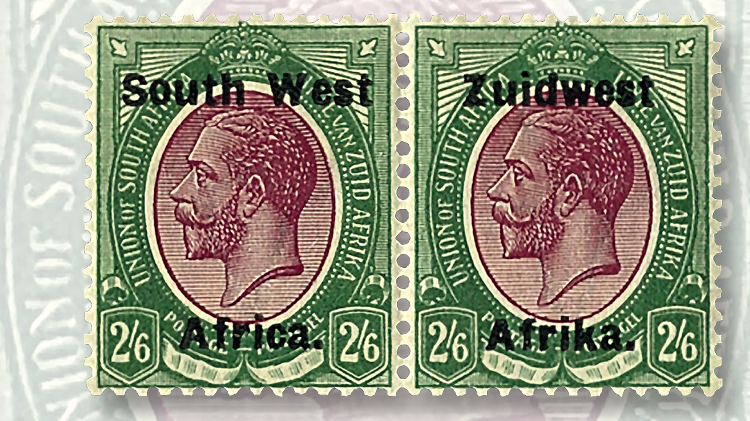 The values for pairs of the billingually overprinted (English “South West/Africa” and Afrikaans “Zuidwest/Afrika”) for use in South West Africa remain stable in the 2018 Scott Standard catalog, while values for single examples have softened. 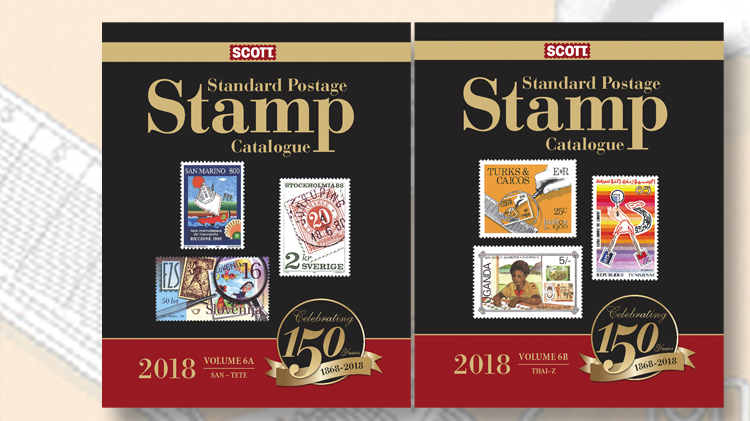 Vols. 6A (countries of the world San Marino-Tete) and 6B (Thailand-Z countries) of the 2018 Scott Standard Postage Stamp Catalogue are now available.
Previous
Next

The Scott catalog has come a long way since its humble beginnings in 1868 as a 24-page bound pamphlet. The Scott Standard Postage Stamp Catalogue lists more than 700,000 stamps from more than 600 stamp-issuing entities. Because the catalog volumes had grown so large that they were literally bursting at the seams, each 2018 Scott Standard catalog has been split into two volumes, A and B. The 2018 Vols. 6A (countries of the world San Marino-Tete) and 6B (Thailand-Z) are now available.

For the 2018 edition, more than 1,700 value changes are recorded for Tanzania. Declines on the order of 10 percent are seen, beginning with issues of the mid-1980s and continuing well into 1999. These changes are due mainly to currency adjustments reflecting a stronger dollar against other major currencies, primarily the British pound and the euro.

The Scott editors recorded almost 350 value changes for the African nation of Sudan. Stamps issued from 2009 to present show strength. Some increases during this period are substantial.

Moderate value increases are scattered throughout the listings for Saudi Arabia.

Almost without exception, the 645 value changes recorded this year for Sri Lanka are decreases of about 10 percent. Values for modern issues from 2007 through 2011 rise to better reflect current dealer retail prices. A few earlier topicals also see increases in value. The pair of 2006 Flowers miniature sheets of eight (Scott 1562a and 1563a) each advance from $7.25 mint and used in the 2017 catalog to $9 both ways this year.

Solomon Islands received a line-by-line review through the 2010 issues. Almost 800 value changes were made. Many decreases in values throughout reflect a weak market for the stamps of these West Pacific islands. On the plus side, scattered increases occur among stamps issued from 2008 onward. The 2008 set of eight honoring British monarchs (Scott 1106-1113) jumps from $4.25 mint and used to $7.75 both ways.

Among Syrian stamps, small to moderate increases are found among values for issues of the Arabian Government. These surcharged and overprinted stamps replaced the British Military Occupation (E.E.F.) stamps (Palestine Scott 2-14) and were used from 1919 to 1920.

Scattered increases are found among the listings of Southern Rhodesia. The 1931 2-shilling dark brown and black George V (Scott 28) stamp moves upward, from $29 unused to $31. The used value remains at $9.

Several new minor varieties were added to the listings of Serbia for perforation and paper varieties.

Mostly increases are found among the more than 70 value changes for Turkey. The 1916 1-piaster ultramarine semipostal stamp with inverted overprint (Scott B34a) doubles in value, from $5 mint and used to $10 both ways. New values have been added for the imperforate varieties of the 1909 newspaper stamps. The imperforate 5-piaster ocher with blue overprint (P61a) is valued at $20 unused and used. The imperforate 20pa carmine rose with blue overprint (P63a) is valued at $80 unused and used. Values for both newspaper stamps are in italics to indicate that these stamps are seldom traded and difficult to value.

Tonga received a line-by-line review, resulting in almost 500 value changes. Almost 375 value changes were made for the listings of Niuofo’ou, reflecting mostly decreases prior to 2002, and a mix of increases and decreases from 2014 on.

A review of Tokelau resulted in more than 500 value changes that reflect an overall softening of the market.

More than 1,900 value changes occur among the Turks and Caicos Islands stamps. Scattered value increases are found for stamps issued during the classic period from 1900 to 1928. Among the modern issues, the 1996 Winnie the Pooh, Christmas set of eight stamps (Scott 1213-1220) declines in value, from $17 mint and used to $15 mint and $12.50 used.

The Turkey in Asia 20-piaster dull green imperforate postage due stamp (J1a) is now valued at $25 used, replacing the dash that indicated that the stamp exists used but is difficult to value. The value is in italics.

Virgin Islands received a thorough review, resulting in more than 900 value changes. More robust value increases are found among the classic issues. The 1878 1-penny green (Scott 9) jumps from $80 unused to $95, and from $90 used to $115. An overall weakening of values occurs for stamps issued from 1977 to 1988. A stronger market exists for the stamps issued from 2008 onward.

Almost 850 value changes were made among the listings for southeast African nation of Zimbabwe. Overall, values are down from 1991 through 2001. A more positive trend can be found for issues from 2002 to the present, where many value increases can be found. The 2007 Women set of four (Scott 1046-1051) moves upward, from $7.75 mint and used to $9 both ways. Values have been added for several modern issues that previously had dashes in the value columns.

New images of Yugoslavia – Trieste stamps have been added to the 2018 Scott Standard catalog. In 1954 this territory was divided. Italy acquired the northern section, and Yugoslavia acquired the southern territory.