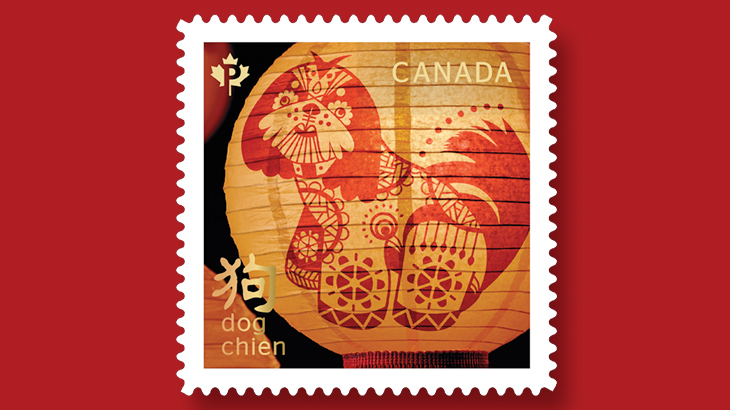 Canada Post will celebrate the Year of the Dog on stamps to be issued Jan. 15. 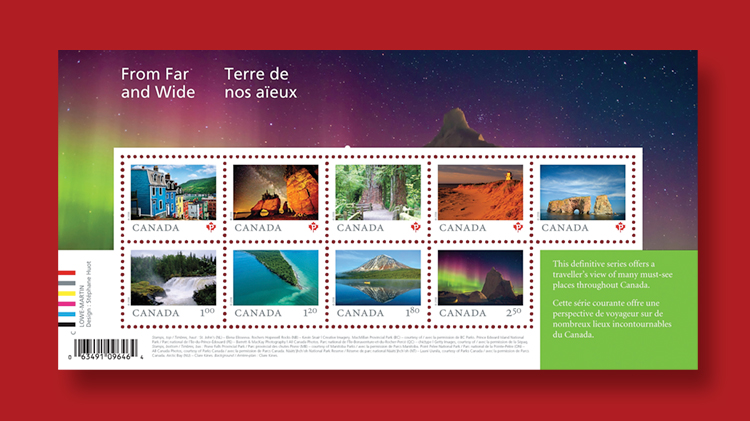 Canada Post’s Far and Wide souvenir sheet offers a tour of some of the county’s most picturesque locations. The Far and Wide stamps also will be issued Jan. 15.
Previous
Next

Canada Post has revealed the designs of its first two stamp issues for 2018: the Year of the Dog and From Far and Wide. Both sets of stamps are scheduled to be issued Jan. 15.

The permanent-rate Year of the Dog booklet stamp is shown here. The design depicts a Chinese paper lantern with an outline image of a dog in red. The issue also will include an international-rate stamp and souvenir sheet, similar to other recent Lunar New Year sets from Canada Post.

The Far and Wide stamps are definitives (regular-issue stamps), according to the inscription on the souvenir sheet. The inscription reads, “This definitive issue offers a traveller’s view of many must-see places throughout Canada.”

The souvenir sheet includes nine se-tenant (side-by-side) stamps. The five stamps in the top row are all nondenominated permanent-rate stamps. Those in the bottom row are denominated $1, $1.20, $1.80 and $2.50, respectively, to meet different domestic and international rates. The $1.20 stamp pays the rate to the United States.

The places depicted on the stamps are identified in the selvage of the souvenir sheet. However, there is no inscription on the stamps stating what they show.

Canada Post’s Women in Winter Sports stamps will be issued later in the month, on Jan. 24.

Further details about these three stamp sets will be reported in future issues of Linn’s. The subjects of other stamps in Canada Post's 2018 program were reported in Linn’s, Dec. 4, 2017, page 11.