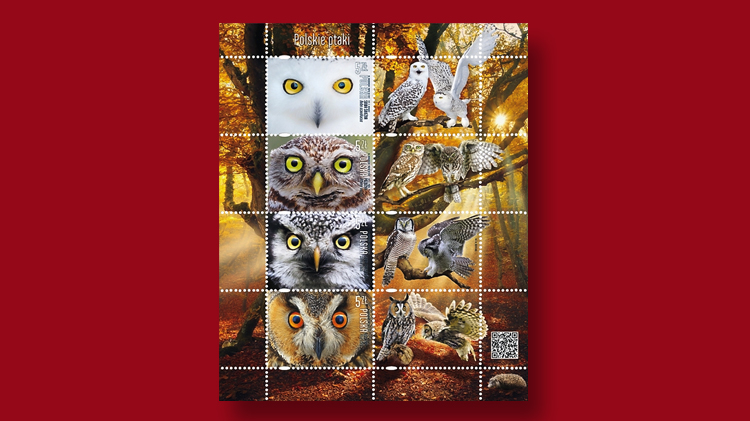 Poland pictures four owls, including the snowy owl, on se-tenant stamps and labels issued in November 2017. 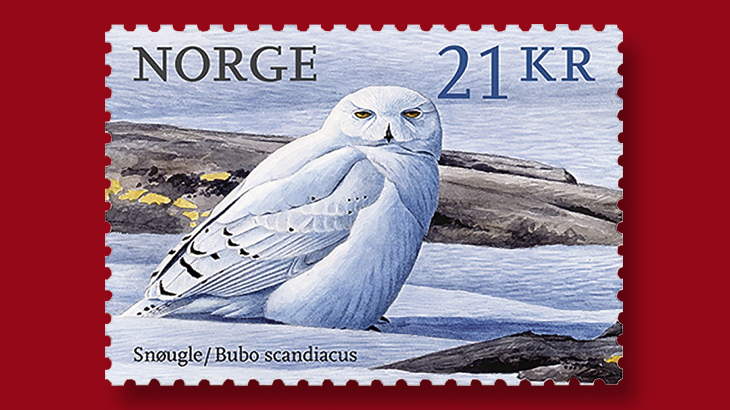 A stamp in Norway’s Bird definitive series features a snowy owl. This large owl that usually lives in the Arctic tundra is named for its white plumage. 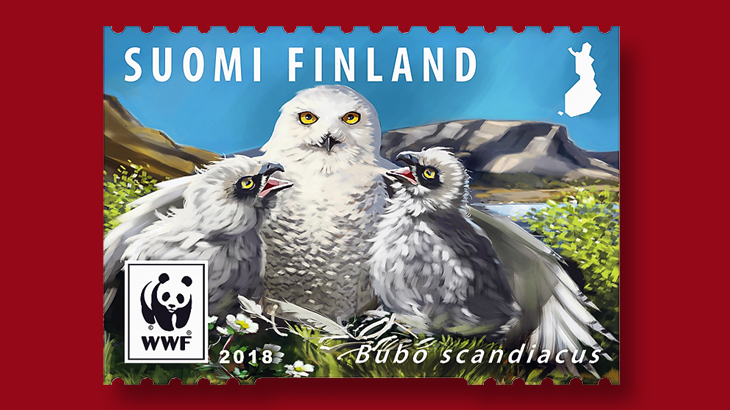 Finland depicts a female snowy owl and two owlets on a World Wildlife Fund stamp to be issued in February, part of a set featuring Arctic animals.
Previous
Next

A snowy owl irruption is taking place in the United States, which means that these Arctic raptors (Bubo scandiacus) are being found much further south and in much greater numbers than normal.

Merriam-Webster’s dictionary defines an irruption as “a sudden sharp increase in the relative numbers of a natural population usually associated with favorable alteration of the environment.”

During a previous irruption in 2013-14, snowy owls were spotted as far south as Florida and Bermuda, according to Project SNOW Storm, a research and conservation group that tracks snowy owls.

A miniature irruption also is taking place on postage stamps, with new stamps from Norway, Finland and Poland.

Two other stamps were added to this series at the same time: a nondenominated domestic-rate stamp depicting a great gray owl (Strix nebulosa), and a 48k stamp showing a rough-legged buzzard (Buteo lagopus).

Enzo Finger designed the stamps, using illustrations by Viggo Ree. Joh. Enschede of the Netherlands printed them by offset.

In announcing the stamps, Norway’s Posten said of the snowy owl: “Many people are familiar with Hedvig, the tame snowy owl from the Harry Potter films that follows the hero through thick and thin. In reality, though, snowy owls spend most of their time catching mice.

“In Norway, the snowy owl is a rare visitor, and on the seldom occasion that one breeds here it is only in the northerly-most counties. It is a sporadic breeding bird, and its breeding frequency occurs during lemming years.”

Finland is scheduled to issue its snowy owl stamp Feb. 28 as part of a World Wildlife Fund set highlighting animals of the Arctic.

The stamp is nondenominated. The map of Finland in the upper right represents that it is a domestic-rate stamp. The WWF panda emblem is in the lower left.

Designed by Marzanna Dabrowska, each stamp is denominated 5 zloty. The pane was issued Nov. 30, 2017.