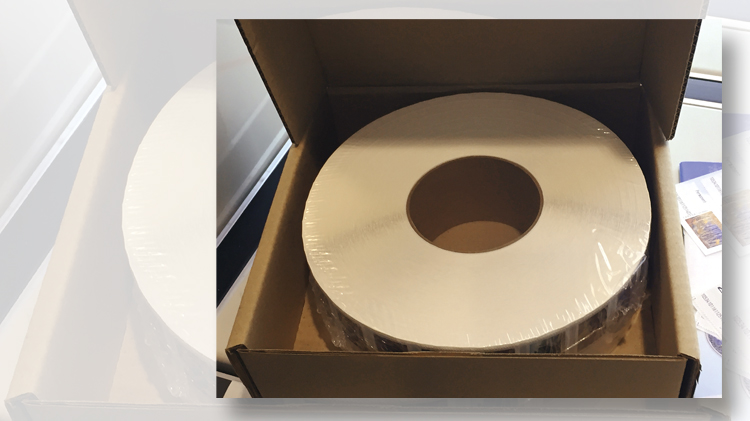 A sealed roll of blank labels produced for the computer-vended stamps. 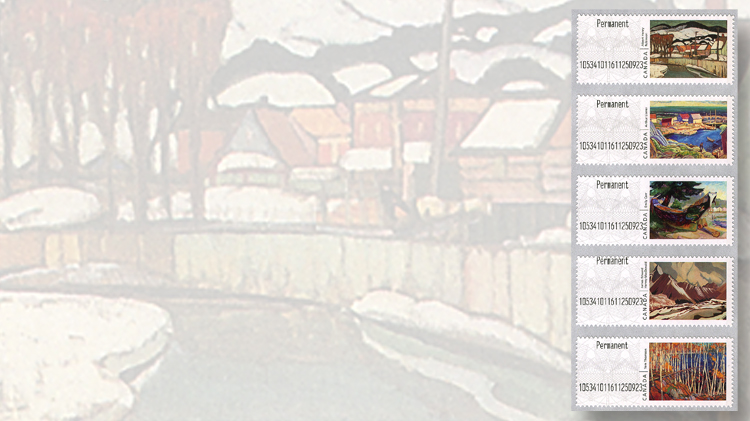 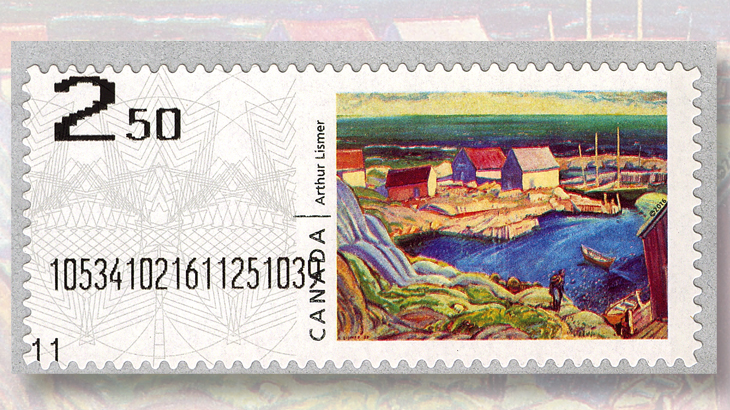 An extra “11” was printed at the bottom of some strips of the Canadian kiosk computer-vended stamp labels with an 18-digit code. 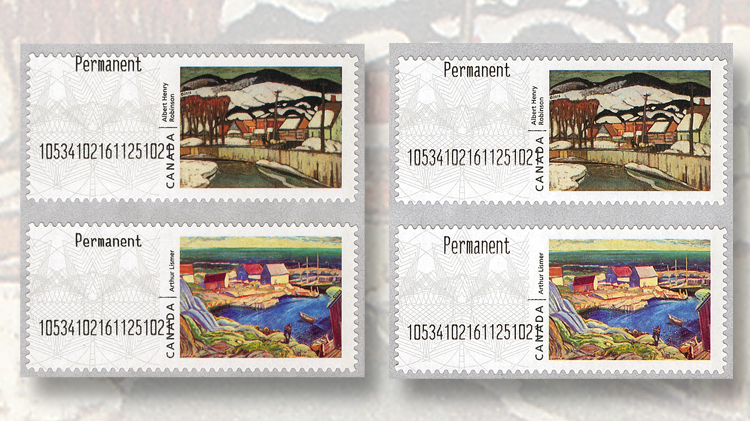 The size of the font used for the text varies on Canada Post’s new kiosk stamp labels.
Previous
Next

Canada Post recently re-introduced the use of computer-vended stamp labels, after an unsuccessful and short-lived trial in 2012-13.

Called “kiosk” stamps by collectors and Canada Post, they have been made available as part of several new self-service concept stores opened and operated as stand-alone facilities by Canada Post.

The concept stores provide customers with a semi-automated parcel posting system, drive-through parcel pickup, and vending machines, as well as other convenience services on up to a 24-hour basis.

The first two locations were opened in 2015 in Richmond Hill, Ontario, and Edmonton, Alberta. Though stamps were available for purchase, they were sold through snack-like vending machines in the form of regular booklets and coil rolls with no custom-printed stamp labels.

On Oct. 31, 2016, Canada Post opened the next generation of concept store in downtown Vancouver, British Columbia, that not only offers the same type of 24-hour service as the previous two locations, but also includes a print-on-demand stamp label unit.

While advertised as being available from Oct. 31, it appears that the earliest stamp labels produced at the location are dated Nov. 19.

On Dec. 16, the stamp label vending option was added to the other two concept stores. The digital code on the labels differs by the assigned location number.

The labels come in five different designs and show paintings from famous Canadian artists. In design, they resemble the “Post & Go” labels, or “Faststamps,” produced by Royal Mail in the United Kingdom.

Parcels mailed from the kiosks continue to receive separate large, nonstamp, meter labels that show the postage paid as well as destination information and bar coding.

The stamp labels, as sold, contain a thermally printed value indicator and a digital code. The initial version of these labels, available for approximately one week, bore an 18-digit code comprised of the following information, in order: six-digit store location, two-digit kiosk number, six-digit date in year/month/date format, and four-digit time of purchase in hour/minute format.

The long code often extended into the edge of the artist’s name to the left of the painting image, which may have prompted Canada Post, without notice, to shorten the code on Nov. 26 to 14 digits consisting of six-digit kiosk location, four-digit date, and four-digit time stamp.

As such, the individual kiosk machine number is no longer included in the shortened code.

The labels can be purchased only in multiples of five. With five different label designs in use, this means that unless a machine is serviced and the labels advanced by one or more as part of the process, each strip of five will always start and end with the same label design.

To speedup the process, Canada Post also has allowed larger quantities of the stamp labels to be specified during a purchase using a multiplier: five, 50 or 100. Once the purchase is paid for, the appropriate number of label strips for each value is then printed.

During the use of the 18-digit code, regardless of the order size and the time to complete the printing, each label in the entire order contained the same code. Once the 14-digit code came into use, it changes with time during the printing of an order.

If purchasing more than five stamps of any value (one strip), all strips of the same value are printed first, followed by the second value, and so on.

Some strips with the 18-digit code also showed an extra, partial, “11” print in the lower-left corner of the bottom label in a strip. This marking appears to indicate the first strip of the next value printed in an order, but its actual purpose is unknown. There are no other markings on the blank or printed labels.

The extra “11” is no longer printed on stamps that have the 14-digit code.

Strips of blank, unprinted, labels are not available from Canada Post or the concept stores.

The blank labels are supplied in large rolls, and are produced by security printer Lowe-Martin. While the concept store went into operation on Oct. 31, based on the packaging box information, the first supply of blank labels for the machines was only produced on Oct. 24. That could explain why the stamp label printing option may not have been available until mid-November.

At the Vancouver location, until approximately mid-December, each printed strip showed a slight upward misalignment of print on the fourth label from top. This has since been corrected and very little to no misalignment now shows.

The differences are typically on the lowest-most label in the strip but occasionally show elsewhere in a strip.  This appears to have been random, and only some labels were affected, though from both machines.

Postally used labels on covers or piece from this new trial are likely to be difficult to find, especially from the first period of use and bearing the 18-digit code.

Be warned: The kiosk labels are thin and do not soak in water, so canceled examples should be kept on paper.

Recognizing collector interest, Canada Post has made available on its website (www.canadapost.ca/shop/new.jsf) mint strips of five of the “permanent” value labels (item  No. 404036118), and first-day covers (item No. 404036126). These bear the Vancouver post office location code and an Oct. 31 first-day-of-issue cancel. Higher-value labels are only available from the actual store locations.

The three concept store locations are identified by Canada Post as trials for this type of postal service.  The public’s acceptance of the self-serve facility concept and the overall success of this trial and technology will determine whether additional concept stores are opened and how broadly the use of these kiosk stamp labels will expand.

The addition of the computer-vended kiosk stamp labels has re-introduced an exciting collecting area in Canadian philately.

Collector demand for stamps labels from the first kiosk trial (December 2012 through July 2013) has been extremely strong and continues to this day. These new labels, with the remaining unprinted space, could be a boon for Canada Post and a financial burden on collectors if advertising or seasonal messages are added in the future. Welcome to the new era of Canadian kiosk stamp labels.