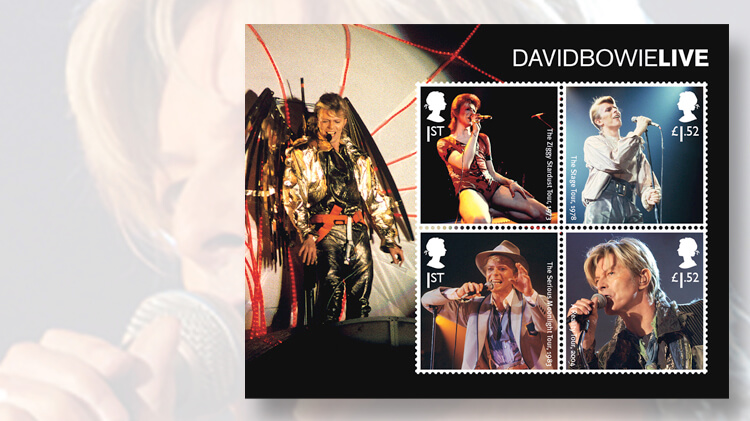 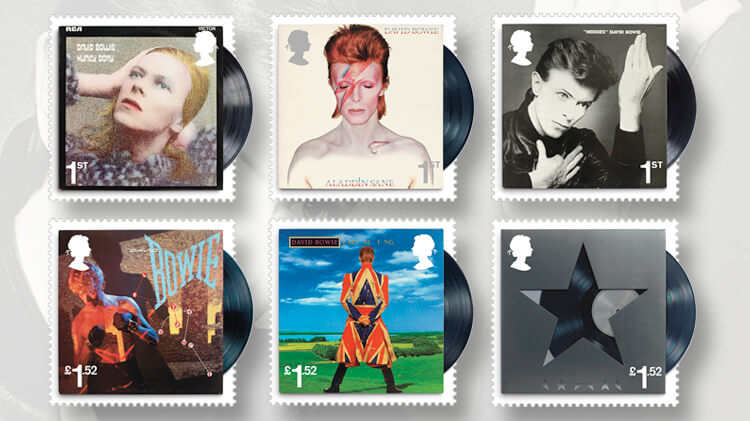 Royal Mail announced Jan. 25 that it would pay tribute to David Bowie by issuing a set of 10 stamps March 14. Six of the stamps reproduce album covers dating from 1971 through 2016.
Previous
Next

Six of the stamps show album covers. The other four feature photographs of Bowie performing and are se-tenant (side-by-side) in a souvenir sheet.

In the Jan. 25 press release announcing the stamps, Royal Mail called them a “tribute to one of the most influential music and cultural figures of all time.”

The press release also said that it was the first time that Royal Mail was dedicating  an entire stamp issue to “an individual music artist or cultural figure.”

Previous issues commemorated The Beatles in 2007 and Pink Floyd in 2016.

Bowie was born David Robert Jones Jan. 8, 1947, in South London. He began performing in bands in the early 1960s, taking the stage name David Bowie in 1966. Throughout his 50-year career — he died Jan. 10, 2016, two days after his 69th birthday — Bowie was constantly changing and reinventing himself.

Tim Masters, an arts correspondent for the BBC, wrote in an online retrospective about Bowie, “Throughout his six decades as a performing artist, he constantly re-invented his sound and persona. From the hippy pop of the Sixties through glam rock and drum and bass to the esoteric jazz sounds of his final album, Bowie never stood still. Generations of musicians cite him as an influence.

“His innovative spirit went beyond music in areas such as acting, art and the internet.”

The stamps picturing album covers show part of the vinyl record protruding from the cover, similar in design to previous British stamps honoring rock music and musicians, including the Pink Floyd set issued July 7, 2016, and the Jan. 7, 2010, set of 10 devoted to album cover art.

Bowie’s 1972 The Rise and Fall of Ziggy Stardust and the Spiders from Mars is reproduced on a nondenominated first-class stamp in the 2010 issue (Scott 2726, 2743).

The stamps in the souvenir sheet present live performances from four decades: the Ziggy Stardust tour, 1972; the Stage tour, 1978; the Serious Moonlight tour, 1983; and A Reality tour, 2004.

The stamps, souvenir sheet, and related products can be preordered online.