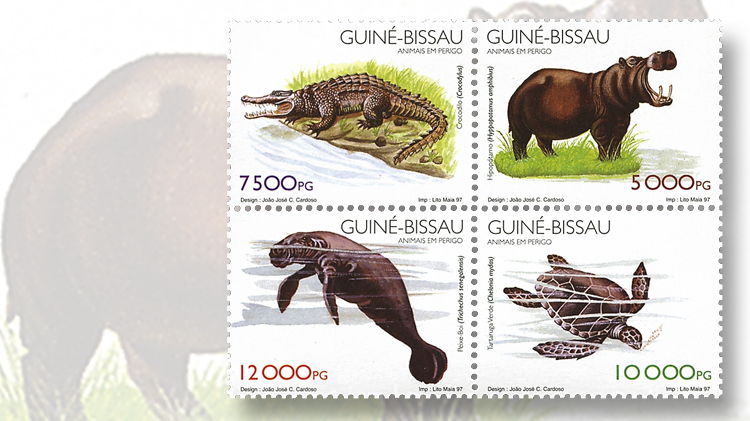 The Guinea-Bissau se-tenant block of four Endangered Animals stamps (Scott 995) is in demand and selling in the $25-to-$30 price range in mint never-hinged condition.

Guinea-Bissau is a small West African country with an area of roughly 14,000 square miles and a population of about 1.7 million. The Portuguese began economic penetration of the area in the 17th century and in the 19th century formally colonized it as Portuguese Guinea.

Gaining independence in 1973, it took the name Guinea-Bissau to distinguish itself from the former French colony of Guinea, which it borders to the south. It is one of the poorest countries in the world. Since independence, it has been subjected to bloody misrule by a series of despots, most of whom have not died peacefully.

Guinea-Bissau has been a prolific issuer of topical postage stamps. In 1997, it issued a set of four se-tenant Endangered Animals stamps. Although Guinea-Bissau changed its currency from pesos to francs before the set was issued, the stamps were denominated in the peso currency.

The animals depicted are a crocodile, a hippopotamus, a manatee, and a sea turtle. The set is listed as a se-tenant block of four (Scott 995) but is not valued in either mint or used condition in the 2017 Scott Standard Postage Stamp Catalogue. The lack of values in this case means that the Scott editors did not have enough sales data to establish values for this set.

The set was not widely distributed, likely because it was denominated in the old currency. It is in demand by fauna topical collectors. Blocks of four in mint never-hinged condition are currently selling in the $25-to-$30 price range. The set was issued in panes of 16. Mint panes of 16 are also in demand and selling for $120 or more.

Keep your eyes peeled for this Danish West Indies stamp