An old logo of the Schlierbach Monastery cheese dairy is pictured on this Austrian stamp. 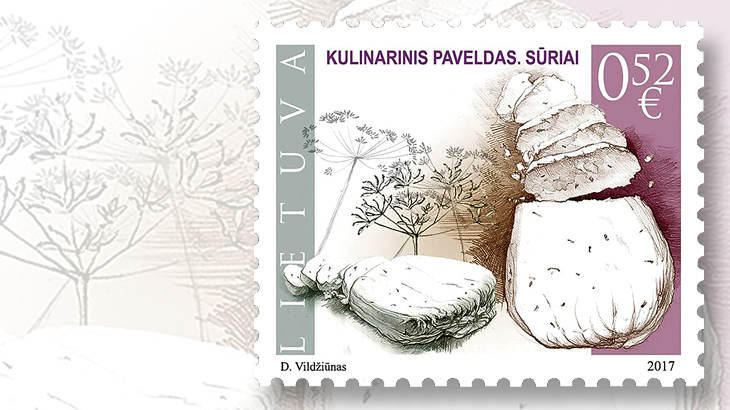 Lithuania honors cheese as part of its gastronomic heritage on this stamp issued May 20. 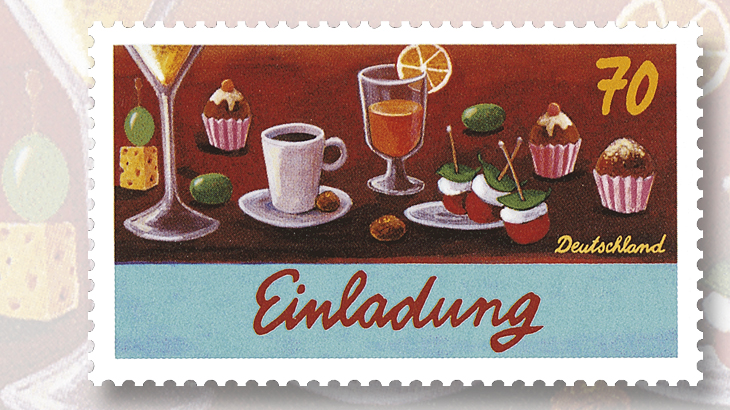 A German Greetings stamp designed for use on invitations includes two different appertizers with cheese. 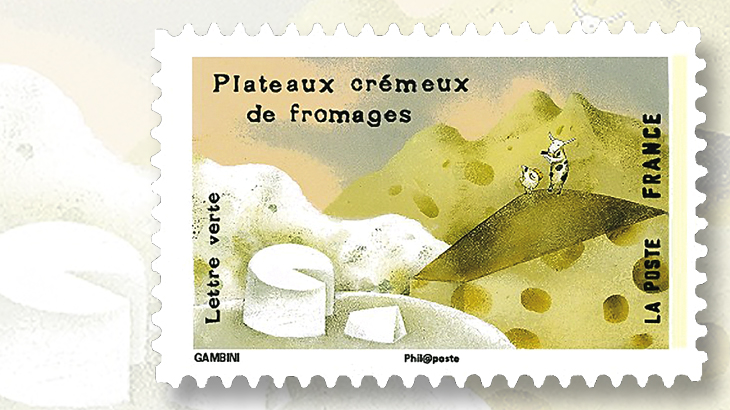 Mountains of cheese are pictured on a stamp from France's new booklet featuring the sense of taste.
Previous
Next

A new stamp from Lithuania honors cheese as part of its culinary heritage. Recent stamps of Austria, Germany, and France also feature cheese.

Lithuania issued its 52¢ Cheese stamp May 20.

Rasa Kruopaite-Laliene, head of the corporate affairs department of Lietuvos Paatas (Lithuania Post), said in announcing this stamp, “We are delighted that we are able to contribute to the preservation of authentic culinary heritage, the promotion of its popularity and the continuity of traditions. … Every time that letters and parcels marked with the new postage stamp go on a symbolic culinary journey, they will present the exceptional product of Lithuania to the entire world.”

The tradition of making cheese in Lithuania dates back to the middle ages, when it was produced at manor houses.

The new-issue announcement from Lietuvos Pastas said, “The production process has remained almost unchanged to these days. Fresh cheese, pressed according to old Lithuanian traditions, is often seasoned with coarse salt, chopped garlic or caraway seeds and is considered as an exceptional gift for a foreign guest interested in the country culinary heritage.”

Designed by D. Vildziunas, the stamp depicts a caraway plant in addition to the cheese. The Estonian printer Vaba Maa printed this stamp by offset in sheets of 50.

This is the second time this century that Lithuania has promoted its cheese on a postage stamp. Cheese and a cow are pictured on a 1.70-litas stamp issued in 2005 (Scott 790), part of the multination Europa series with the theme of gastronomy.

This logo shows the monastery in Upper Austria. Originally founded as a nunnery in the 14th century, it was abandonded during the Protestant Reformantion, and re-established as a Cistercian monastery in the early 17th century.

Brother Leonhard Kitzler founded the monastery’s cheese dairy in 1924. Changes in the 21st century include the addition of cheese made from sheep’s and goat’s milk in 2008, and transforming the dairy into an organic operation in 2012.

It is now the largest monastery cheese dairy in Europe, producing 20 different varieties of soft cheeses. Austria Post said, “Traditional production methods and maturing in the monastery’s cellar give the speciality cheeses their unique flavour.”

The stamp was issued April 28 with a ceremony at the monastery, which concluded with “a solemn address and a delicious cheese buffet.” according to the monastery.

Dieter Krass designed the stamp. Joh. Enschede of the Netherlands printed it by offset in sheets of 50.

A Germany Greeting stamp issued May 11 appears to show two types of cheeses.

The stamp is inscribed “Einladung,” which means invitation, and depicts party snacks and beverages.

One snack is a caprese salad appetizer containing slices of mozarella cheese between tomato and basil. In the stamp design, three of these skewered miniature capres bites are pictured on a small plate near the front of the design, just to the left of the country name, “Deutschland.”

Pictured on the far left of the design is what appears to be a cube of Swiss cheese topped by an olive, or perhaps a grape.

Regina Kehn designed this 70¢ stamp. Giesecke & Devrient printed it by offset in sheets of 10.

Another stamp issued at the same time is for use on sympathy cards and messages of condolence.

In 2014, France’s La Poste began a series of booklet stamps focusing on the five senses. The latest booklet, issued Aug. 4, is devoted to taste and includes a stamp representing a cheese plate.

The other stamps in the booklet symbolize the tastes of mint tea, coffee, chocolate, chili peppers, tomatoes and olives, strawberries, lemon juice, legumes, tartines with honey, croissants and baguettes, and lobsters.

All of the stamps are nondenominated, paying the domestic economy, or green, rate.

Cecile Gambini designed the stamps in the Taste booklet. Philaposte printed them by offset.