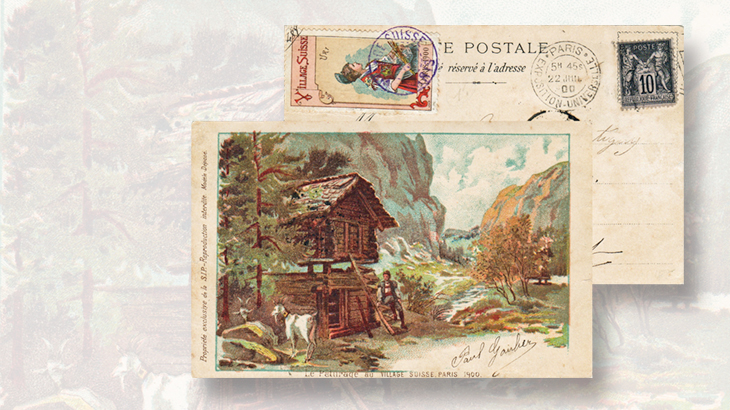 The Swiss Village at the world’s fair was a miniature Switzerland, complete with pastures, herds, and herdsmen, as shown on this postcard in what is probably an idealized view. A label from the exhibit and a faux cancel were applied to the address side of 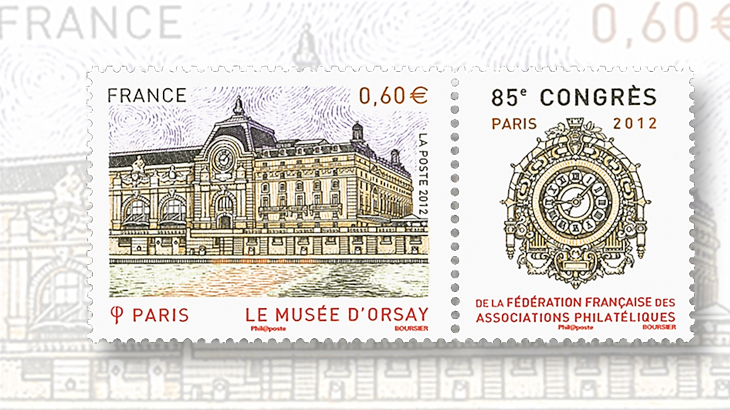 The Orsay Museum (Musee d’Orsay) was originally a train station built for the fair. The beautiful building was preserved by turning it into an art museum. The clock in the main hall is shown on the attached label. 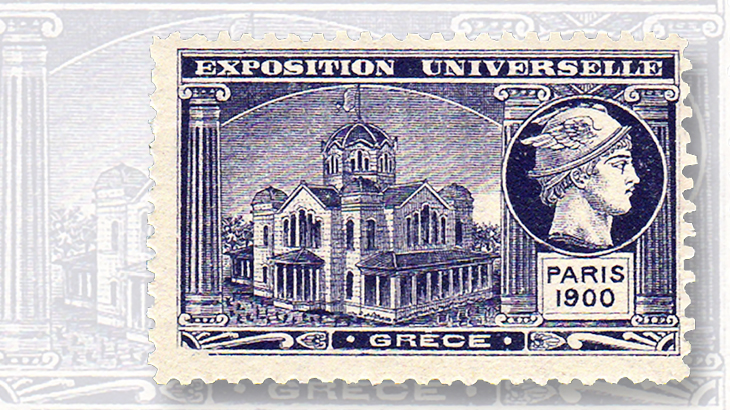 The Greek Pavilion shown on this label was built in classical style, with long white columns. The inset portrait depicts Hermes, the Greek god of athletics and messengers, among others. 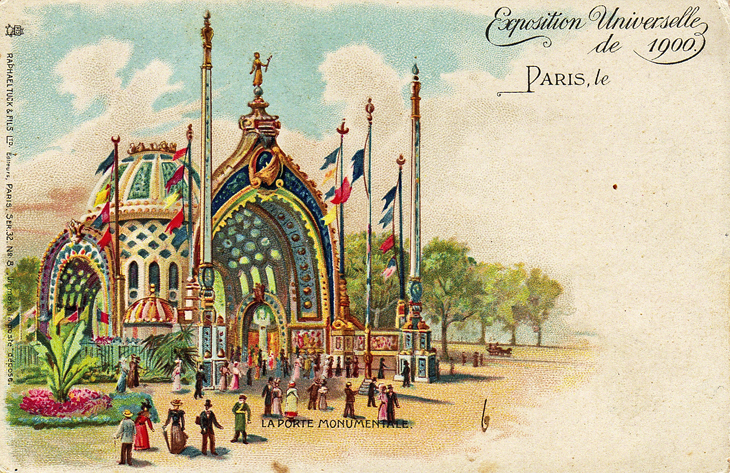 The elaborate triumphal gateway to the Exposition Universelle de 1900 shown on this picture postcard was considered garish and ugly, especially in comparison to the Eiffel Tower that served as the entrance to the previous world’s fair in Paris in 1889. 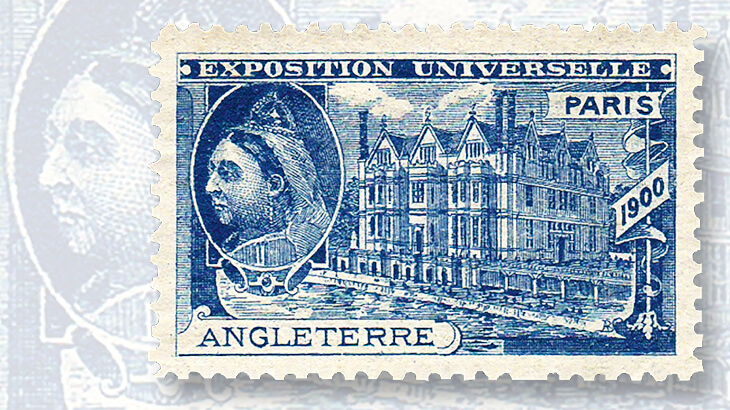 The British Royalty Pavilion shown on this label was built in the style of an Elizabethan mansion. The inset portrait on the left shows the reigning monarch, Queen Victoria. 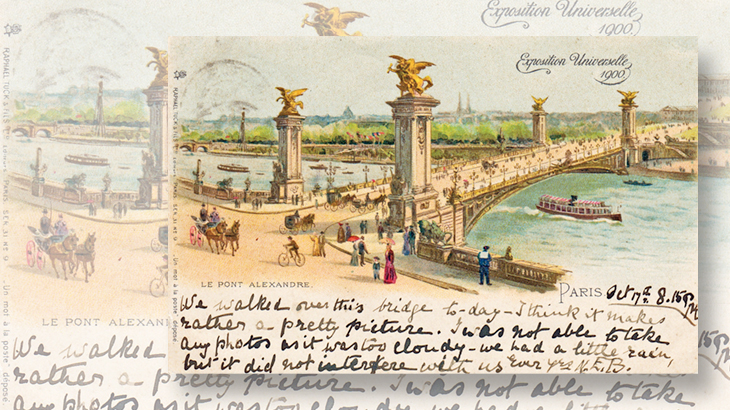 The Alexander III Bridge crossing the Seine is still in use today and is Paris’ most ornate bridge. It is named after Czar Alexander III, who had signed a treaty with France a few years before the fair. 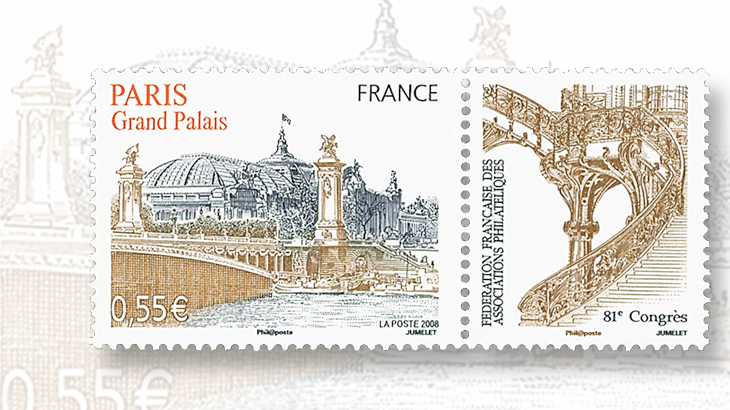 The Alexander III Bridge and the Grand Palais (great palace), which held art exhibits during the fair, are shown on this 2008 stamp. The interior grand staircase is shown on the attached label. 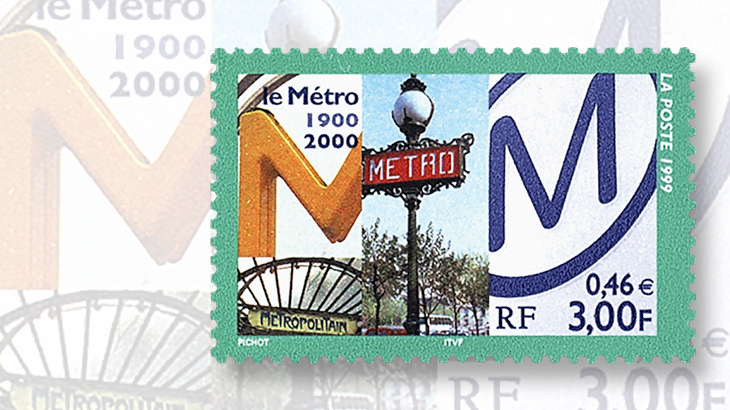 The Paris subway, called the Metro, opened in 1900 for the fair. The centennial was commemorated on this late 1999 stamp. 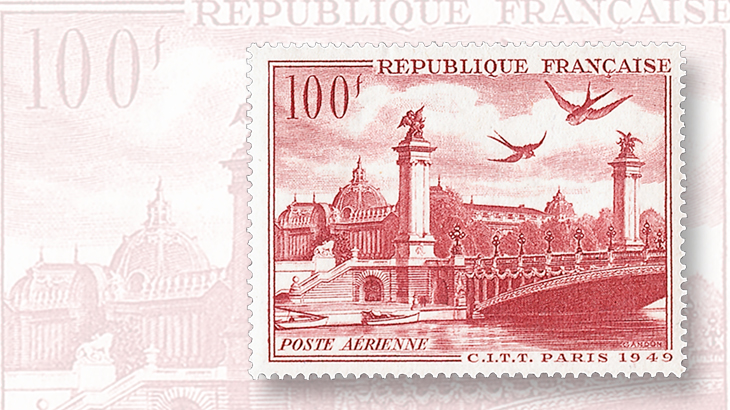 The Alexander III Bridge and the Petit Palais (small palace), both built for the 1900 exposition, are shown on this 1949 airmail stamp. 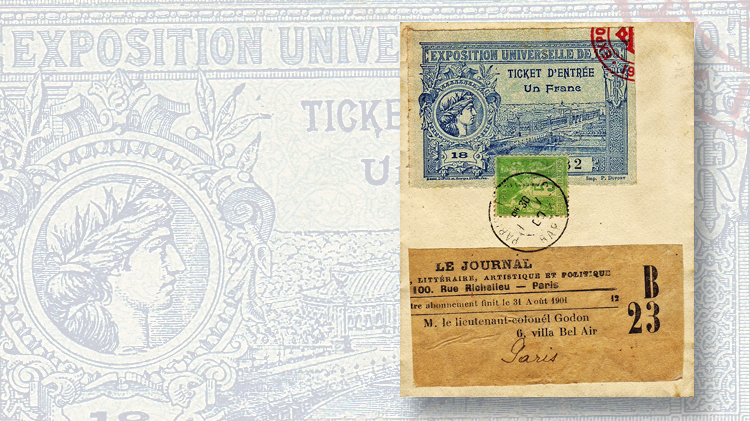 The Paris world’s fair of 1900 celebrated the peace, progress, and prosperity of the time and looked forward to the new century. This cover features an entrance ticket tied to the cover with the current printed-matter rate stamp.
Previous
Next

Philately of France - By Larry Rosenblum

As the 20th century approached, the Republic of France decided to follow its successful 1889 world’s fair, for which the Eiffel Tower was built, with a bigger one in 1900.

The Exposition Universelle de 1900 would celebrate the achievements of the past century and look forward to the next one. It would be bigger than any of the four previous world’s fairs held in Paris during the prior 50 years.

The fair would be held at the peak of what we now call La Belle Epoque (the beautiful era). This period, between the end of the Franco-Prussian war in 1871 and the beginning of World War I in 1914, was one of peace, progress, and prosperity. The period was named in retrospect when it was compared to the later tragedy of the two world wars.

Commemorative stamps had not yet been issued in France, so there were no postage stamps issued for the exposition. However, there were many picture postcards, which had just been approved the year before, and stamplike labels (known as cinderellas).

Seen below is an unusual cover from the exposition is featured in the first illustration. An entry ticket is pasted on the cover with a then-current 5-centime Type Sage stamp (Scott 105) overlapping it. Five centimes paid the printed-matter rate, and the cover is unsealed, as required for that type of mail. The address has been cut out from a larger publication, perhaps a newspaper, and also attached to the cover. The stamp and address label are tied by the postmark. The date is not legible, but “00” for the year can be seen clearly.

Shown on a picture postcard is the triumphal gateway to the exhibition. It was located at the Place de la Concord, a public square in the center of Paris most notable as the place where King Louis XVI was executed by guillotine in 1793. The garish gateway was considered to be ugly and was widely ridiculed.

The mock Elizabethan mansion that was the British Royalty Pavilion, one of the largest exhibits, is shown on a label. It included stained-glass windows by Morris & Co. and paintings by famous British artists Joseph Turner, Thomas Gainsborough, John Constable, and others. The label has an inset portrait of Queen Victoria, the reigning monarch.

Another label depicts the Greek Pavilion, built in classical style in an octagonal shape with long white columns. The inset portrait shows Hermes, the Greek god of herds, trade, thievery, athletics, and messengers.

This was appropriate because Paris also hosted the relatively small Olympic games concurrently with the exposition. These were the first Olympics to be held outside Greece.

Outdoing the other countries, Switzerland spent three years building a miniature version of the country, complete with mountains, forests, a lake, chalets, and pastures with herds and herdsmen. A picture postcard of the Swiss village, which you can see below, shows goats grazing near a small building, probably an idealized image.

On the address side is a label showing a woman in native dress. It is tied by a faux postmark applied in the village. The card is franked with the then-current 10c stamp (Scott 106) that paid the domestic and worldwide postcard rate. It was mailed July 22, 1900, and delivered the next day to the addressee in Orleans, a city about 70 miles from Paris.

Several later stamps depict structures that were built for the exposition, all of which were intended to be permanent. All are still in use today.

The Petit Palais (small palace) and Pont Alexandre III (Alexander III Bridge) are shown on a 1949 airmail stamp (Scott C28) celebrating the International Telegraph and Telephone Conference held in Paris that year. The Petit Palais, built in the ornate beaux-arts style popular at the time, displayed the history of French art. Today it houses the City of Paris Museum of Fine Arts.

Pont Alexandre III is also in the beaux-arts style, with art nouveau lamps and decorations. It was named after Czar Alexander III, who concluded the Franco-Russian Alliance in 1892. The alliance was formed because both countries were wary of the growing power of Germany.

The bridge, which is the most ornate of the many that cross the Seine in Paris, is also shown on an exhibition postcard. Part of the message gives an indication of the technology of the time, “I was not able to take any photos as it was too cloudy.”

Across the street from the Petit Palais is the Grand Palais (great palace), also in the beaux-arts style. It was shown on a 2008 stamp marking the French Federation of Philatelic Associations’ 81st Congress (Scott 3452). The Grand Palais also contained art exhibits, roughly half for French art and the other half for art from other countries. Today it is used for multiple purposes.

A new train station, Gare D’Orsay, was built on the Left Bank of the Seine, not far from the exhibition. It became obsolete as a train station by 1940, and eventually it was modified to become a beautiful museum for 19th and 20th century art, the Musee d’Orsay. It is shown on a 2012 stamp marking the French Federation of Philatelic Associations’ 85th Congress (Scott 4272).

Finally, the first line of the Paris subway system, the Metro, opened during the exposition with a stop near the main entrance. Today the Metro, shown on a 1999 stamp (Scott 2747), is the second busiest subway system in Europe (after Moscow), carrying more than 1.5 billion passengers per year. The Subway stamp is pictured below.

Although the Exposition Universelle de 1900 had 50 million visitors, it still lost money. Paris would not have another world’s fair until 1937. The 1900 fair, however, did leave us with many souvenirs that are still popular today.