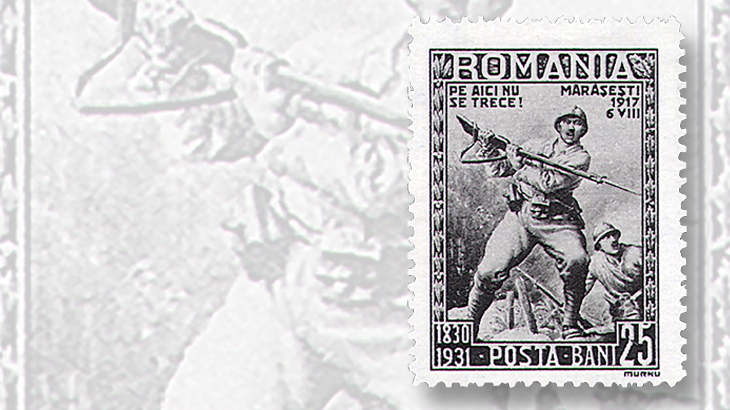 This Romania 25-ban stamp, issued May 30, 1931, depicts an infantryman with rifle and bayonet. 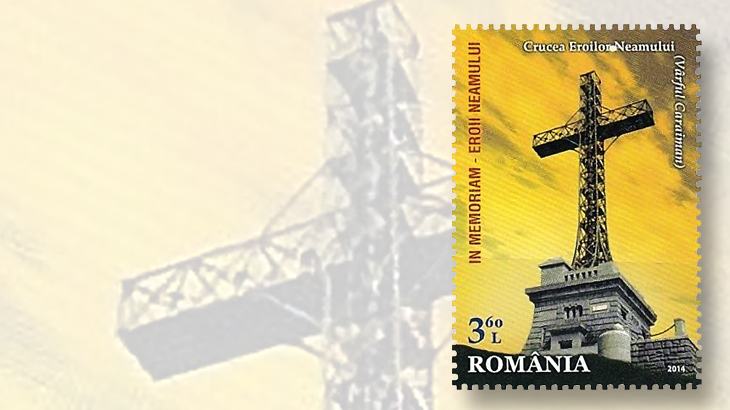 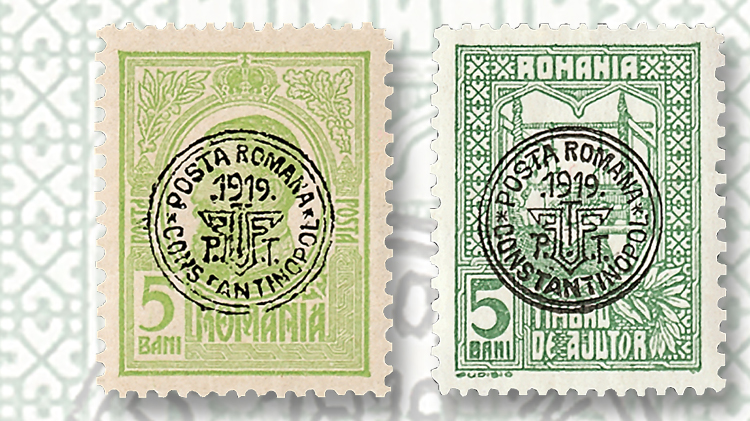 Both of these overprinted Romania stamps were issued in 1919 for use at the Romanian post office in Constantinople. At top is a 5-ban King Carol I stamp. The 5b postal tax stamp at bottom was produced by overprinting a 1918 postal tax stamp picturing Quee 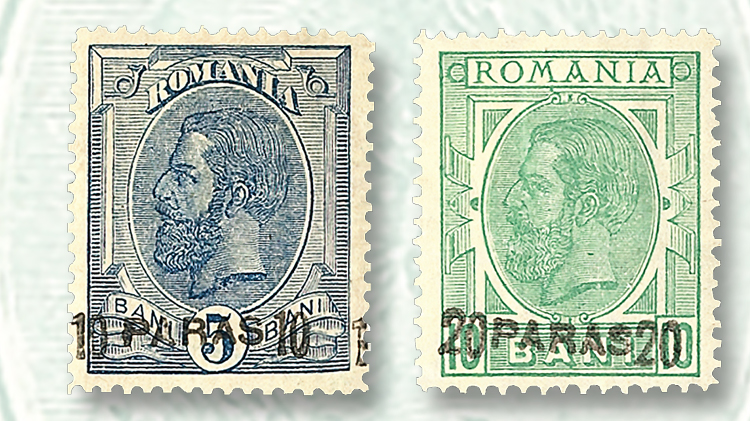 In 1896, Romania opened a post office in Constantinople. Overprinted and surcharged stamps were issued for use at the post office, including these two King Carol I stamps: a 10-para-on-5-ban blue stamp overprinted in black, top, and a 20pa-on-10b emerald
Previous
Next

Merriam Webster’s Collegiate Dictionary defines extraterritoriality as “exemption from the application or jurisdiction of local laws or tribunals.”

Historically, most countries limited the operation of the posts to their own government or to designated postal systems.

When one country forces or coerces another country to cede the right to operate a postal system within the second country’s borders, it is an example of extraterritoriality.

This normally occurred because the host postal system was unreliable, slow, inefficient, or subject to pilferage. Also, in the late 19th and early 20th centuries, having postal offices abroad came to be considered one of the hallmarks of a great power.

They are from a set of six depicting King Carol I. Three are overprinted and surcharged in black, and three in violet (Scott 1-6). The stamps are perforated gauge 11½, 13½, and compound, and printed on paper watermarked “PR.”

Dacia, the predecessor to modern Romania, was conquered by the Romans in A.D. 106. Roman rule persisted until 271.

Rome’s influence continues to this day, because modern Romanians speak a Romance language descended from Latin and related to French, Italian, Spanish, and Portuguese.

Unfortunately for Romania, it lay along a major invasion route for the tribes surging out of Asia. In the Middle Ages, it was overrun by Huns, Gepids, Avars, various Slavic tribes, Bulgars, and Pechenegs.

The Byzantines established control of the country for a while, but Kievan Rus, the Bulgarian Empire, and the Magyars (Hungarians) displaced them.

Then in 1241, worst of all, came the Mongol invasion. After the Mongols, the principalities of Wallachia and Moldavia emerged in the 14th century and would eventually form the basis for modern Romania.

At first, they were vassals of the Kingdom of Hungary, but by the 18th century suzerainty had passed to the Ottoman Empire.

In 1862, the provinces were united as Romania. In 1866, King Carol I (a German prince of the House of Hohenzollern-Sigmaringen) came to the throne. The last vestiges of Ottoman control were shaken off in the successful War of Independence in 1877-78.

Up to about 1860, the country’s most important foreign trading partner was the Ottoman Empire. After that date, trade with Austro-Hungary, the German Empire, and Western Europe rapidly eclipsed that with the Ottomans.

However, the Ottoman Empire was still a relatively important market for Romanian agricultural products. It was this level of trade that, in 1896, led Romanian postal authorities to open a post office in Constantinople.

Opposition to the Romanian post office came not from the Ottomans but from the Austrians.

The Austrians didn’t want the Romanians cutting into their business and used their influence to persuade the Ottomans to revoke the mailing privileges of the Romania office.

Romania responded by transferring its post office to a Romanian Steamship Co. ship moored in the harbor at Constantinople.

Mail was collected ashore and then brought to the ship for servicing. This shipboard office opened March 16, 1896.

On May 25, Austrian officials arrived with Ottoman representatives in tow and closed the post office. Mail still in the office was seized and thrown overboard by the Austrians as the Ottoman authorities looked on.

Mailpieces serviced by this office during its brief period of operation are highly collectible. Many of the used stamps in the philatelic market likely bear favor cancels.

The Romanian Steamship Co. ship continued to receive mail and forward it surreptitiously, but no stamps were sold and no postal markings were applied.

World War I proved disastrous for Romania, as it did for much of Europe. The Romanians entered the war on the side of the Allies on Aug. 27, 1916.

The decision to enter the war was prompted by Allied guarantees of territorial gains, notably Transylvania. The Romanians fought doggedly against German, Austro-Hungarian, Bulgarian, and Ottoman armies, but were forced to sign a separate peace with the Central Powers May 7, 1918.

The below 25b stamp issued May 10, 1931, to commemorate the centenary of the Romanian Army shows a WWI infantryman with rifle and bayonet (Romania Scott 389). The stamp, produced by photogravure on paper watermarked multiple crown over “PTT,” is perforated gauge 13½.

Later in 1918, Allied victories in the Balkans knocked Bulgaria out of the war. Romania re-entered the war Nov. 10, 1918, one day before the Armistice ended the fighting.

Romania had lost 350,000 men killed in the war and about one-tenth of its total population. This amounted to 6 percent of all Allied casualties suffered in the war, a huge amount for such a small country.

The war also wrecked the country’s agriculture, industry, and general economy. Illustrated below is a 3.60-leu Heroes Cross on Caraiman Peak stamp (Scott 5571). The stamp, issued July 25, 1914, was produced by lithography and is perforated gauge 13½. The cross commemorates Romania’s war dead in WWI. The monument was constructed high in the Southern Carpathians from 1926 to 1928. It was consecrated on Holy Cross Day, Sept. 14, 1928.

In the negotiations at Paris to end the war, Romania was treated very shabbily by the Western Allies.

Using the separate peace that Romania had been forced to sign as a pretext, France and Britain attempted to deny Romania the territorial gains it had been promised in return for joining the Allied cause.

But events on the ground, notably the rise and aggression of the Hungarian Soviet Republic, enabled Romania to acquire much of what it had been promised.

Romania also was excluded from important negotiations at Versailles and was usually presented with decisions regarding its future without being consulted for input.

In 1919, in this climate of fighting for international recognition and respect, Romania decided to reopen its post office in Constantinople. The office opened about August 1919 and remained in operation until 1922 or 1923.

A set of five Offices in the Ottoman Empire King Carol I stamps (Romanian Post Offices in the Turkish Empire Scott 7-11) was issued. The stamps, overprinted in black or red, are perforated gauge 11½, 13½, and compound on unwatermarked paper.

An overprinted 1918 5b postal tax stamp picturing Queen Marie weaving also was issued in 1919 (Romanian Post Offices in the Turkish Empire Scott RA1). The postal tax stamp is perforated gauge 11½ and 11½ by 13½ on unwatermarked paper. The Ottoman Empire ended in 1923 when Turkish nationalist leader Kemal Ataturk deposed the sultan, ended the caliphate, and declared the Turkish Republic.

In July 1923, Turkey signed the Treaty of Lausanne with Great Britain, France, Greece, and Italy, establishing its national boundaries. One of the provisions of the treaty abolished all foreign post offices in Turkey.