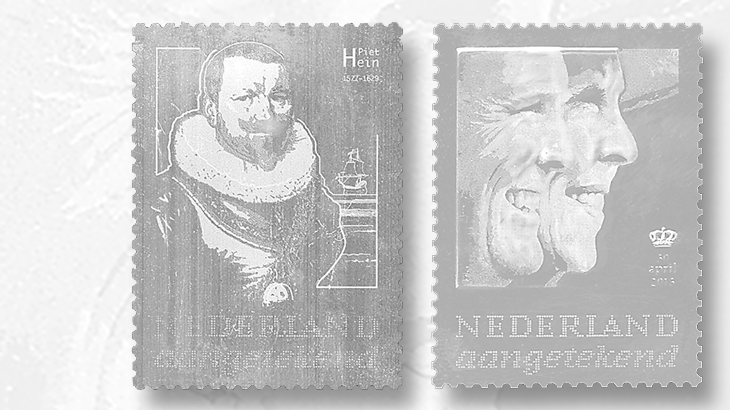 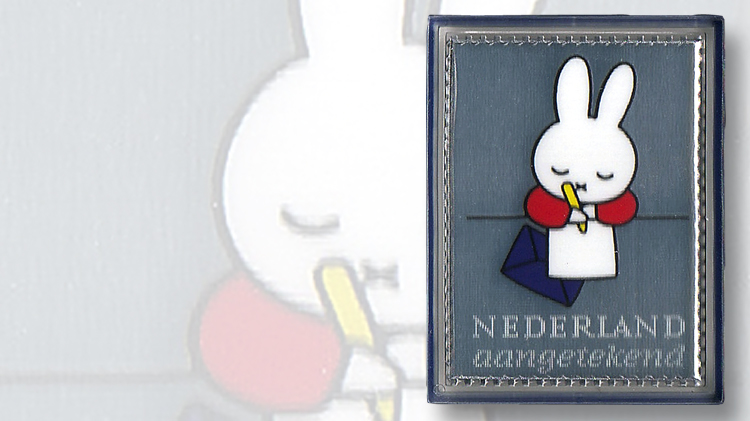 The Netherlands issued a special silver stamp with a color image featuring Miffy, the fictional rabbit created by Dick Bruna, writing a letter. 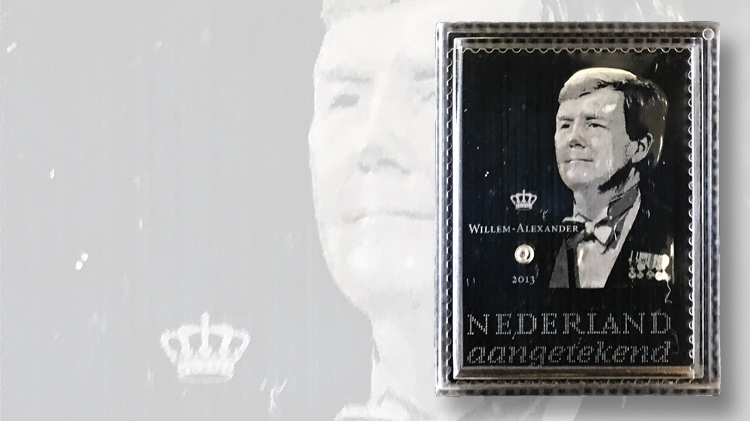 The Netherlands’ series of silver stamps featuring European monarchs began in 2013 with a silver stamp for its own king, Willem-Alexander. 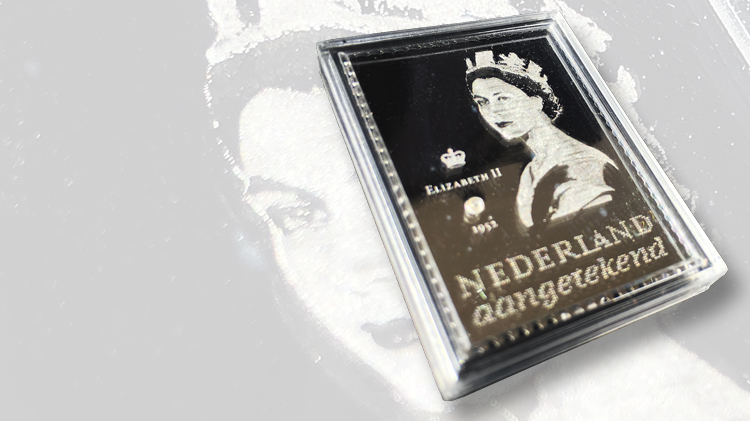 The most recent stamp in the Netherlands’ silver series depicts Queen Elizabeth II and includes a diamond. This silver registration stamp was issued Aug. 2, 2016. 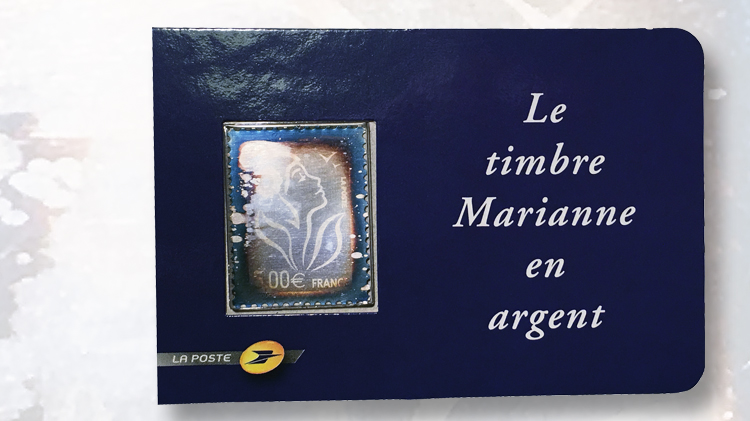 This example of France’s silver €5 Marianne definitive became oxidized even though it was kept in its original protected plastic presentation card. 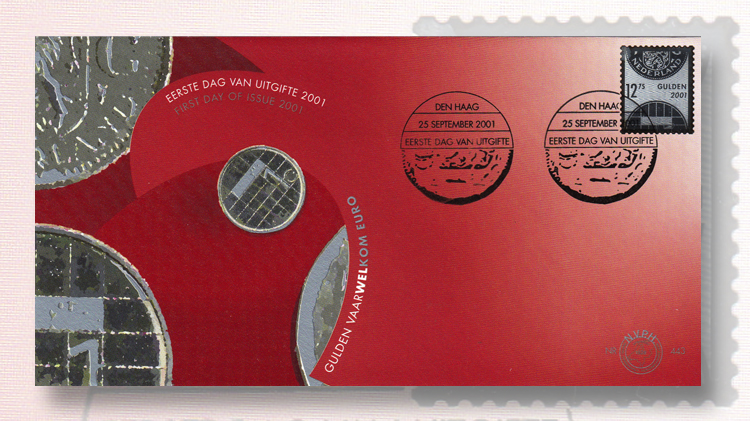 A first-day cover for the Netherlands’ first silver stamp, issued Sept. 25, 2001, to mark the currency transition from the guilder to the euro. This postage stamp has a face value of 12.75 guilders.
Previous
Next

In order to be categorized as valid postage, metallic stamps must bear a denomination or a service inscription for permanent postage validity for use in a Universal Postal Union-approved postal administration.

The Netherlands’ postal authority, PostNL, and the Royal Dutch Mint have created stamps made of .999 pure, paper-thin silver, perforated on the edges.

This silver stamp series began in 2013 to celebrate the Netherlands’ new king, Willem-Alexander, which is the first image pictured below.

Subsequently, nine other silver stamps in 3D relief were issued to pay tribute to reigning monarchs of Europe.

Each stamp is adorned with a rose-cut diamond, measuring 1.2 millimeters in diameter, supplied by Gassan, the famous Dutch diamond house in Amsterdam. The high-gloss background finish, highlighted by a diamond, gives each monarch stamp a jewel-like quality.

The latest metallic stamp in this monarch series was issued in 2016, featuring Queen Elizabeth II. It is the second image below. The stamps commemorate the monarch’s first year of coronation and bear the official portrait of the monarch.

These silver stamps are legal tender valid for postal use in the Netherlands. In place of a denomination, they are inscribed “aangetekend,” the Dutch word for “registration.”

This is equivalent to a face value of €8.15 (close to US$9.20), valid for registered mail weighing up to 2,000 grams sent within in the Netherlands.

Peelable self-adhesive tape is attached to the back of each stamp, should one choose to use them on mail.

According to PostNL, only 1,000 of each stamp were issued.

These stamps initially were only available in a subscription program of all 10 stamps, but later were made available individually for €49.95 (close to $56.30) each.

So far, I have only found the first stamp showing King Willem-Alexander and the most recent one featuring Queen Elizabeth II sold individually online through the World Online Philatelic Agency.

The high-quality wooden presentation box that came with the original subscription is suitable for display.

Each individual silver stamp in the box is protected in a plastic capsule, similar to a proof coin set.

The protective capsule allows viewers to admire each stamp’s 3D characteristics as viewed from different angles.

Though postally valid, these stamps are not listed in the Scott Standard Postage Stamp Catalogue.

I asked the Scott editors about this and obtained a detailed and informative response as to why Scott decided not to list this series of stamps.

The main reason is that they are regarded as a personalized type of stamp issue. They are similar to other issues from the Netherlands and Austria that recycle the same frame design with different images shown in the center.

A footnote about such issues appears in the Scott Standard catalog after Netherlands Scott 1385, part of a series of bird stamps with the same frame.

In the case of the silver stamps, the frame is the same as used on the 2013 metallic registration stamp showing Queen Beatrix and King Willem-Alexander (Scott F2).

While I understand the decision of the Scott editors, I disagree with it. In this series of metallic stamps, each issue is unique in terms of topic, occasion, and date of issue.

I believe this is different from the astoundingly large number of varieties of personalized frame stamps issued under the same date and oftentimes in the same sheet.

Also, I have found similar examples that resulted in  catalog number listings, including French sports stamps featuring soccer in 2010 (Scott 3826), rugby in 2011 (4070), and handball in 2012 (4254). These metallic stamps share the same frame design,  with the same format, denomination, and country name in the same fonts.

These French stamps were sold at face value, €5, in a card-size display pack.

It is up to collectors to decide whether to include the Netherlands’ royalty series stamps in their collections or not.

The Netherlands has issued several other silver stamps in recent years. A couple of these are listed in the Scott catalog.

In addition to the aforementioned registration stamp issued in 2013 to mark the transition from Queen Beatrix to King Willem-Alexander as reigning monarch (Scott F2), another silver registration stamp was issued two years earlier, in 2011 (F1), depicting Dutch explorer Piet Hein. It is shown in the second image below.

On Aug. 24, 2015, PostNL issued a special silver stamp, shown in the third image below, to celebrate the 60th birthday of Miffy, or Nijntje in Dutch, a world-famous popular children’s book and cartoon character drawn and written by Dutch artist Dick Bruna (1927-2017). This was the first time a silver stamp featured a color image, a new technique employed by the Royal Dutch Mint in Utrecht.

Inscribed “aangetekend,” the Miffy stamp is a postally valid registration stamp, equivalent to 7.95, similar to the previous Dutch silver registration stamp issues. It was sold for 25 in a limited-edition presentation folder.

This metallic Miffy stamp has become increasing popular among collectors.

Similar to the Miffy stamp,  silver stamps depicting the comic-book characters Tom Poes and Olivier B. Bommel were issued March 18, 2016, for their 75th anniversary.

PostNL used a special printing technique for these two stamps that accentuates Tom Poes, the small white cat, and the pipe-smoking Mr. Bommel’s checkered jacket. They were manufactured by the Royal Dutch Mint.

The Tom Poes and Olivier B. Bommel silver stamps are sold in a deluxe collector’s pack for €25, with a limited quantity of only 750. The pack sold out soon after its release.

The first, on Feb. 2, shows a peony from a watercolor by Janneke Brinkman-Salentijn and marks her 25th anniversary as an artist.

The second was released March 24, the first anniversary of the death Johan Cruyff, and shows a portrait of the of legendary soccer player and coach. The quantity produced of this stamp is reported to be 1,400.

A publicity image of this stamp from the Netherlands PostNL is shown with this column.

France, among other countries, has issued silver stamps in recent years. These include the aforementioned sports stamps and stamps in the Marianne definitive series.

Unlike the Dutch silver stamps, the French ones were sold at post offices at face value, encased in plastic.

These stamps oxidize easily if exposed to moisture and sunlight, even if kept in the original plastic capsule. An oxidized French Marianne silver stamp is shown below as an example. Once a silver stamp is oxidized, it is difficult to restore to its original appearance.

Collectors must carefully store these stamps in their original plastic capsules and pay close attention to the humidity, as well as to the metals’ oxidation level.

Nevertheless, the coinlike quality of these metallic stamps is especially dynamic when they are viewed at different angles. This is one of the reasons why I cherish these special stamps in my collection.