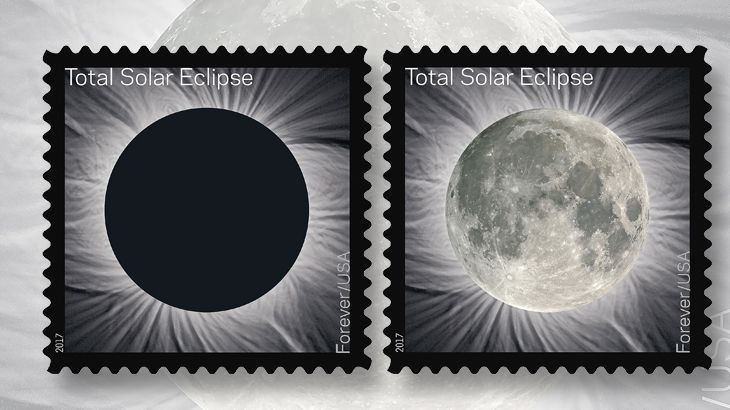 Stamp collectors sometimes frown at what they consider gimmicky formats for stamps, but two stamp issues scheduled for release this year made me smile.

The stamp features thermochromic ink that is activated by the touch of a finger. The warmth of your finger can transform the image of the solar eclipse (a black disk) on the stamp into an image of the moon.

Linn’s associate editor Michael Baadke provided additional details on the stamp in a story posted April 27. A version of that report also appeared in the May 22 issue of Linn’s.

This clever design element has captured the attention of the national media. Such coverage can only benefit our wonderful hobby by spreading the word that stamps are fun, entertaining, and just plain cool.

The USPS isn’t the first to use thermochromic ink on its stamps. Others have tried it with some success.

Great Britain’s Royal Mail jumped on the Harry Potter bandwagon in 2007 with a sheet of 20 Smilers first-class (1st) stamps (Scott 2487-2491) with 20 labels. The stamps feature the crests of the Hogwarts School and its four houses.

The labels show magic spells or could be personalized for a fee. The magic spell labels were printed using thermographic ink. Human touch causes the labels to reveal what the spells were used for.

In 2016, Royal Mail used thermographic ink on a set of six stamps in three se-tenant pairs (Scott 3546-3551) to commemorate the 100th anniversary of Agatha Christie’s writing of her first crime novel and the 40th anniversary of her death. The stamps featured “hidden secrets using microtext, UV ink and thermochromic ink.”

Is thermochromism a gimmick used by postal services to sell more stamps? Absolutely. But if gimmicks attract positive attention and publicity from the national media, stamp collecting can only benefit.

For the record, I also appreciate the whimsy of the round Have a Ball! stamps reported on page 1 of this issue. The stamps feature a special coating that gives “them a textured feel,” according the Postal Service.

Use these stamps on your mail and share them with noncollectors. What can it hurt? As an added benefit, they might bring a smile to someone’s face.

Satisfying that urge is easy with a subscription to Linn’s Stamp News. Sign up here for all the latest philatelic news, columns, and features that make Linn’s the go-to source for stamp collectors of all abilities and interests!