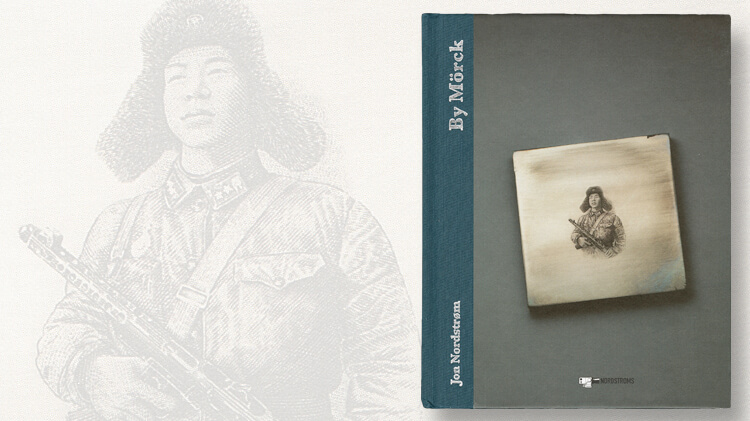 By Morck, a book by Jon Nordstrom about Swedish-born artist and stamp engraver Martin Morck. The substantial hardcover book is filled with full-color illustrations of stamp designs, proofs, and other artwork, and immerses the reader in the story of Morck’ 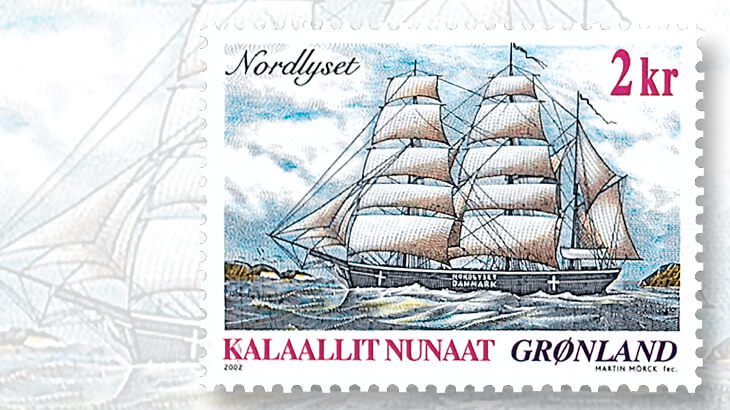 The 2-krone Nordlyset stamp from Greenland’s 2002 Ships set of four, one of more than 830 issued stamps with a design engraved by Morck.
Previous
Next

A richly illustrated hardcover book detailing the life and career of a veteran stamp engraver is a must for any collector with an interest in the stamp hobby’s most respected art form.

By Morck is a biography of the Swedish-born artist Martin Morck, who has completed engraved illustrations for more than 830 stamps issued by countries throughout Scandinavia and the rest of the world, including the United States and Canada. By Morck’s accounting, that makes him the world’s most prolific living stamp engraver.

The book is richly illustrated with color images of stamp designs Morck has created, mostly shown as finished stamps, but also pictured as complete proofs and vignettes.

The stamps are shown roughly life-size over some 60 pages at the front of the book. At the end of the work, a few stamps are enlarged to fill almost a full page, with some displayed over a two-page spread.

The enlargements are a special treat, of course, for they provide an opportunity to examine the finely detailed engravings Morck created to complete his portraits of world leaders, majestic sailing vessels, and even the crafty fairy-tale character known in English as Puss in Boots.

The illustrations in By Morck, including Morck’s personal photographs, outnumber the pages devoted to text, but that seems appropriate for a book focused on the life of an artist.

Still, the text tells an engaging story of Morck’s journey: the son of two Scandinavian artists, now one of the world’s most respected stamp and banknote engravers.

The text is almost entirely set up as a conversation between Morck and author Jon Nordstrom. It begins simply enough with reminiscences of Morck’s rather unstructured childhood, growing up in what amounts to an artist’s colony in Gothenburg, Sweden, the son of a Swedish textile-artist mother and a Norwegian graphic-artist father who also was a stamp collector.

Though he has been involved in the arts all of his life, Morck tried his hand at other work, including building repair and commercial fishing, before settling into a career of graphic illustration.

He attended design school and began an apprenticeship with the Swedish postal service, leaving abruptly after six months to work on a fishing trawler.

It wouldn’t be the first time Morck followed his nose, as he is fond of saying: doing what comes naturally to him, following his instincts and interests, even though doing so might appear unorthodox to others.

The book, like its subject, is rather freewheeling, but the author regularly takes us into areas that will appeal to collectors, such as the ins and outs of how stamp ideas become designs before they are turned into finished stamps.

Along the way, readers also learn about Morck’s adventures in Greenland, including the rescuing of an abandoned baby musk ox, and his job as a visiting professor of engraving at a Chinese university.

By Morck by Jon Nordstrom is a handsomely bound 264-page hardcover book written in English.

It is available for $46.75 plus $7 shipping from Nordfrim. The Nordfrim website has an English language option, and the book can be located by entering “Nordstrom” (the author’s last name) into the search box.

We have them for you in Linn’s Stamp News! Subscribe today and get in-depth features, expert stamp-market analysis, and so much more!