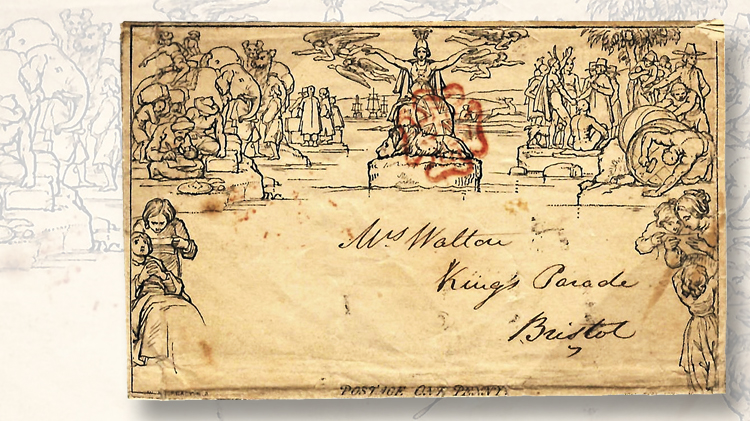 Many people mocked the design of the postal stationery by William Mulready created for the new 1840 Uniform Penny Post. Note the text at the foot of this Mulready cover to Bristol: “Postage One Penny.” 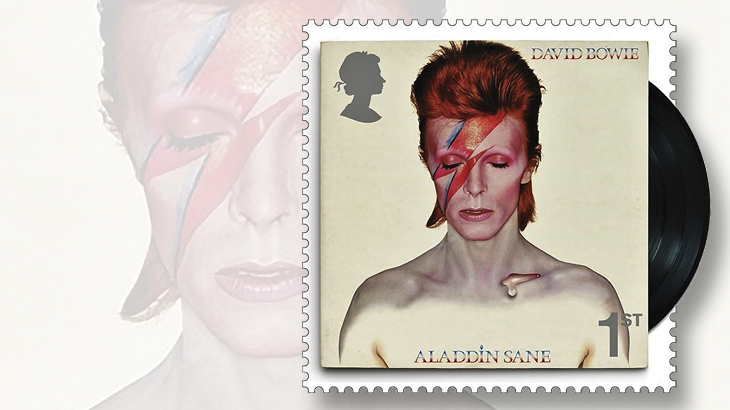 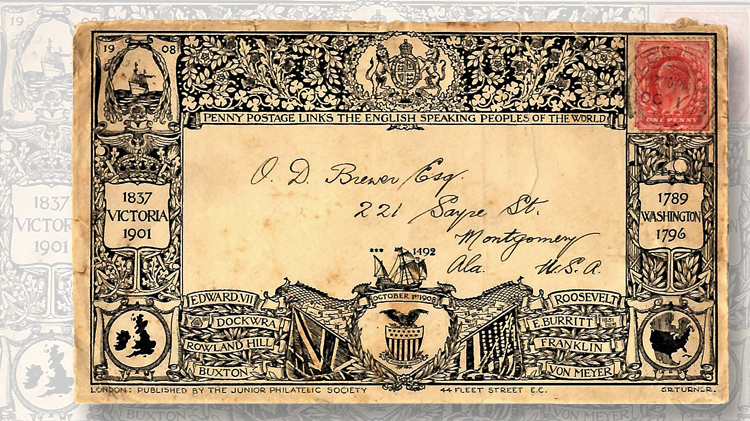 This 1908 cover created by the British Junior Philatelic Society celebrated the 1840 Uniform Penny Post, linking “the English speaking peoples of the world.” 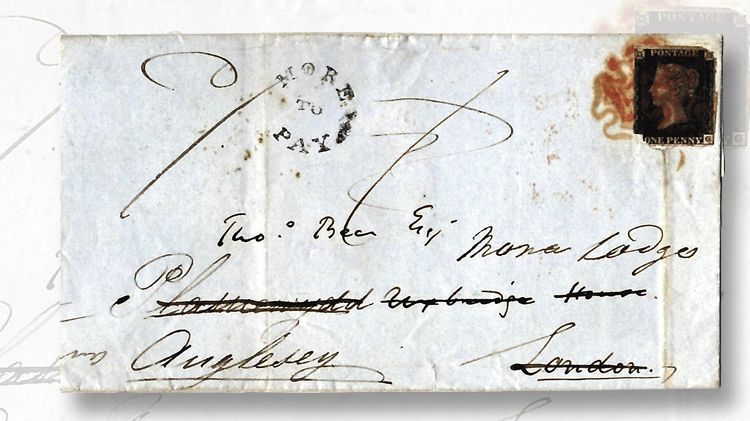 An October 1840 cover franked with a Penny Black stamp was mailed from Bangor, Wales, to London, then forwarded to Anglesey, Wales. But, as the circular marking notes, there was “More To Pay.”
Previous
Next

A pretty souvenir cover from Great Britain in 1908, acquired at a recent stamp show, is the inspiration for this particular column.

In 1840, Great Britain’s Royal Mail, the postal service, reduced the postage rate for letters not exceeding a half ounce in weight, sent to and from any part of the United Kingdom.

This postal plan was based primarily on a proposal of comprehensive postal changes by social reformer Rowland Hill, and was put into place Jan. 10, 1840. It became known as the Uniform Penny Post.

Before the Uniform Penny Post in Britain, the postal rates were very high, and postage for most letters ended up being paid for by the recipient, not the sender.

There were no British adhesive postage stamps prior to May 1, 1840, when the famed Penny Black stamp, depicting Queen Victoria, and the often ridiculed postal stationery designed by artist William Mulready were issued.

Here we are in the 21st century, and many who send letters through the mail still grumble about the cost. Between the 19th century and this one, needless to say, a lot of things changed postally as well as otherwise.

Post offices all around the world were expanding along with the population — more people, more letters; more letters, more postal staff, plus more complex and expensive transport, as well as ever-changing technology.

Postal rates had to rise to cover all these costs.

From 1932 to 1958, a 1-ounce letter could be mailed within the United States for 3¢. Most of us who are baby boomers can remember back to our childhood, when our parents would put a 3¢ stamp on an envelope and hand it to us so that we would take it to the mailbox up the street.

Now the U.S. Postal Service’s rate for a 1-ounce first-class letter is 49¢. Suppose you need to send a 1-ounce letter from New York City to Portland, Ore. It will have a long trip on an airplane, but still costs only 49¢. Not so bad, is it?

If you lived in England and had to mail a first-class letter to Scotland, you would have to pay 65 pence, which works out to U.S. 80¢.

A Royal Mail stamp issued in January, one of a set honoring the late singer David Bowie, has “1st” printed in the bottom-right corner, indicating that the stamp covers the 65p fee for a first-class letter.

Want to learn more about how postal rates have changed?

Janet Klug's Stamp Collecting Basics column from our June 5 issue offers plenty on the postal relationship between Great Britain and America. She goes into much more detail on the costs and varieties of mailings that took place during the last 175 years, and how rates changed during that time. Subscribe to Linn’s Stamp News to read all about it!