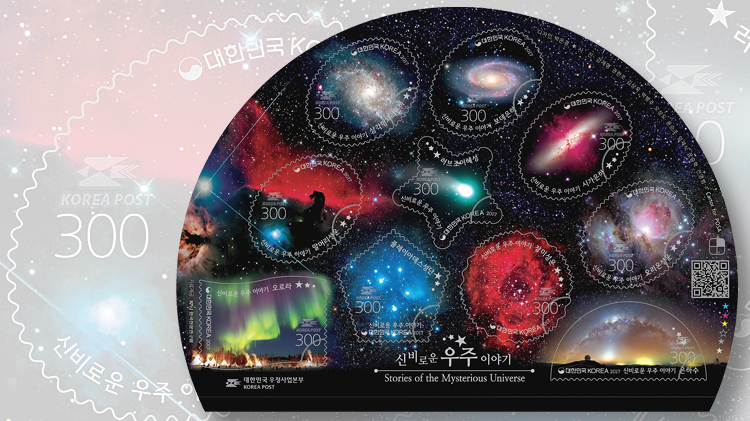 A new pane of stamps from South Korea called “Stories of the Mysterious Universe” contains 10 stamps of various shapes featuring photographs of nebulae, galaxies, a comet, and the northern lights. 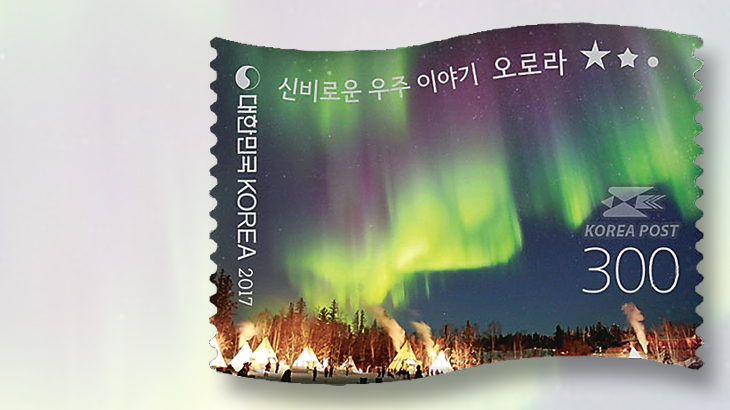 The South Korean stamp picturing the northern lights is shaped like a waving flag. 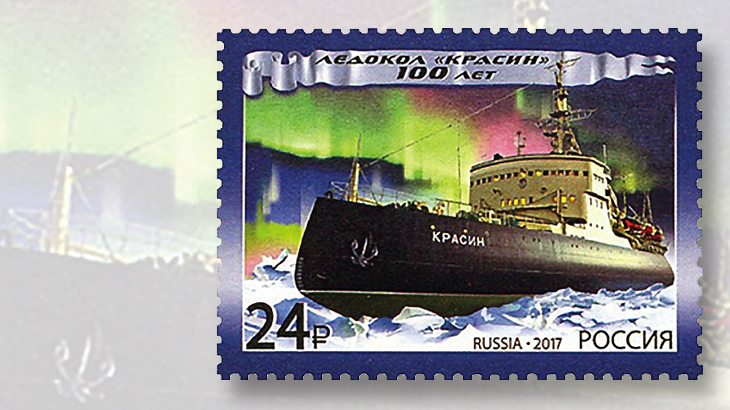 Russia issued a commemorative stamp March 31 honoring the 100th anniversary of the icebreaker Krassin. The ship is shown in the foreground and the northern lights in the background. 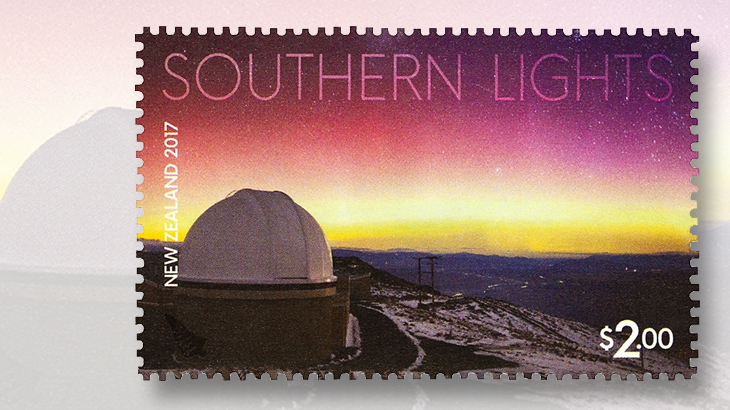 Six stamps from New Zealand depict the southern lights as photographed from Mount John Observatory in the Mackenzie Basin on the South Island. The observatory is shown in the lower left on the $2 stamp. 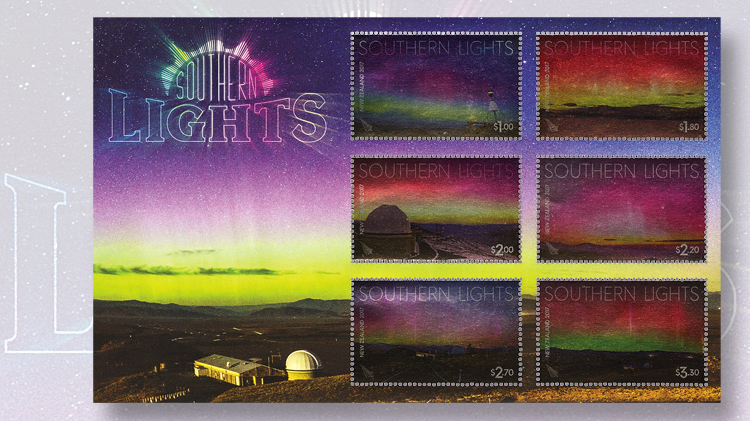 A special silver foil was used in printing this souvenir sheet to mimic the shimmering effects of the southern lights. New Zealand Post issued the sheet Feb. 8.
Previous
Next

Ten of the mysteries of the universe are illustrated on a pane of stamps issued March 27 by South Korea. The pane can be seen below, to the left. The stamp pane resembles a rising full moon and includes 10 300 won self-adhesive stamps of various geometric shapes, including round, oval, semicircular, and pentagonal. In addition, one stamp is shaped like a star and another like a waving flag, which is shown just below.

According to information from Korea Post, the stamps depict the winning entries in an astronomical photography contest.

The celestial bodies pictured include galaxies, nebulae, the Pleiades star cluster, and the Lovejoy Comet. Also, the stamp at lower right reproduces a photograph of the Milky Way, while the stamp at lower left depicts the aurora borealis, commonly called the northern lights.

Korea Post has embedded a QR code in the pane to link through a smartphone to a website with further information about the objects featured on the stamps.

The pane also was printed with a fluorescent ink that glows in the dark.

Eun-Kyung Park designed the stamp pane. It was printed by Cartor Security Printing.

The aurora borealis is pictured in the background of a Russian stamp marking the 100th anniversary of the icebreaker Krassin . This 24-ruble commemorative was issued March 31.

The most powerful icebreaker in the world for several decades, Krassin has been fully restored and is now a floating museum in St. Petersburg. Check out the icebreaker stamp below. The St. Petersburg website provides a brief history: “Designed by the famous Russian seaman, Admiral Stepan O. Makarov and built in 1916 in Britain, the ship was originally named after the Russian mythological warrior — Svyatogor. Renamed [Krassin] during the Soviet era, the powerful icebreaker took part in the rescue operation to save the Italian polar expedition led by Umberto Nobile.

“During WWII the [Krassin]-led Allied convoys, which brought strategic supplies, arms and ammunition to the Soviet Union. The convoys fought their way to the northern Soviet seaports, despite heavy Nazi bombardment and the constant threat of submarine attacks.

“After the war the historic icebreaker took an active part in research expeditions in the Polar Ocean and led Soviet cargo convoys through the polar region.”

Designed by V. Beltyukov, the stamp was printed by offset in panes of 14 with a label at upper left. The aurora borealis is shown in the selvage above the stamps, and an ice-packed sea below.

A set of six stamps from New Zealand reproduces photographs taken of the southern lights, known as the aurora australis. The stamps depicting these gorgeous lights are below.

New Zealand Post issued these stamps Feb. 8 in separate sheets of 25 and in a souvenir sheet with the six designs se-tenant (side-by-side). In announcing the stamps, New Zealand Post described the southern lights as a “spellbinding natural light show that produces shimmering sheets of colourful light that appear to dance across the sky.”

Pictured prominently on the $2 stamp as well as in the selvage of the souvenir sheet is the University of Canterbury’s Mount John Observatory in the Mackenzie Basin on the South Island. The area is home to one of the world’s largest dark-sky reserves.

The International Dark-Sky Association defines a dark-sky reserve as “a public or private land possessing an exceptional or distinguished quality of starry nights and nocturnal environment that is specifically protected for its scientific, natural, educational, cultural, heritage and/or public enjoyment.” In addition to being a site for viewing stars, Aoraki Mackenzie International Dark Sky Reserve is an ideal location for watching the southern lights.

New Zealand Post said: “The Southern Lights can range in colour from pink to green to purple, with the colours dependent on a number of factors. The type of solar wind particle, the type of gas molecule and the electrical state at the time of the collision all have an effect on the eventual colour of the aurora.”

Jonathan Gray designed the stamps. Southern Color Print of Dunedin, New Zealand, printed them by offset. A special silver foil was used in the production of the souvenir sheet. This sheet can be seen just above.