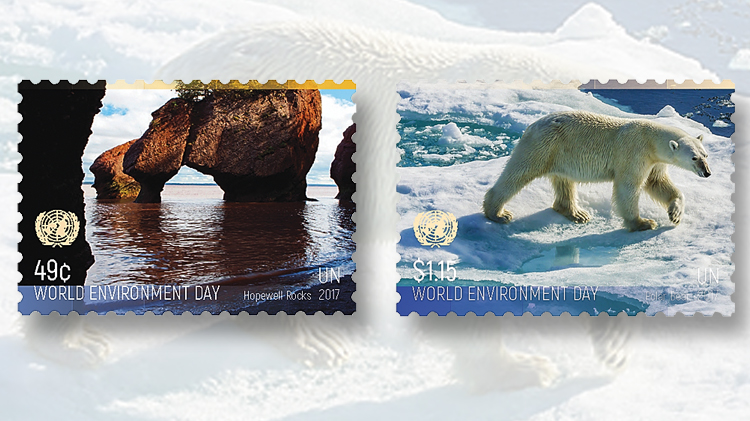 The two United Nations World Environment Day stamps for use from the post office at U.N. headquarters in New York City depict Hopewell Rocks in New Brunswick and a polar bear on Baffin Island. 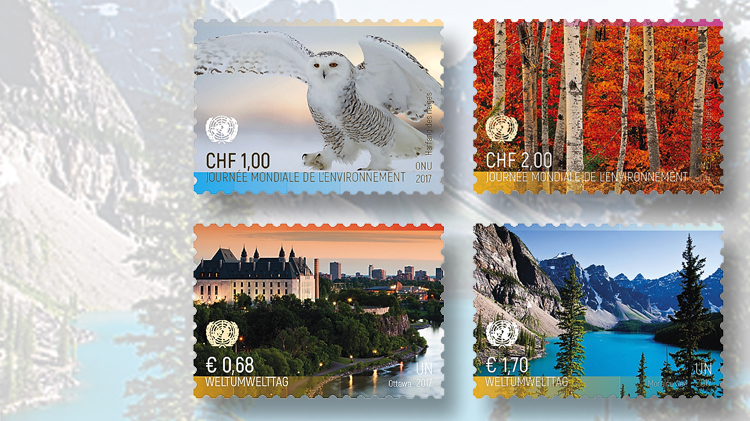 The other four stamps in the United Nations World Environment Day issue feature a snowy owl in Quebec, the Supreme Court of Canada in Ottawa, red maples and aspens in the fall, and Moraine Lake in Banff National Park.
Previous
Next

Canada is the host of this year’s World Environment Day. The theme is “Connecting People to Nature.”

World Environment Day is the United Nations’ “principal vehicle for encouraging worldwide awareness and action for the environment.”

“In the spirit of this year’s theme, ‘Connecting People to Nature,’ I encourage all Canadians to explore our country’s beautiful natural areas, including our national parks, national wildlife areas, and migratory bird sanctuaries,” said Canada’s Minister of Environment and Climate Change Catherine McKenna.

The UNPA’s World Environment Day issue includes two stamps for each U.N. post office: 49¢ and $1.15 for the office at U.N. headquarters in New York City; 1 franc and 2fr for the Palais des Nations in Geneva, Switzerland; and €0.68 and €1.70 for the Vienna International Center in Vienna, Austria.

The stamps reproduce photographs of Canadian landscapes, two of which include animals.

The 49¢ stamp shows one of the formations at Hopewell Rocks in the Bay of Fundy in New Brunswick, and the $1.15 denomination depicts a polar bear on Baffin Island in the territory of Nunavut.

A snowy owl in Quebec is pictured on the 1fr stamp. An autumn scene of Canada’s red maples and aspens is featured on the 2fr.

The €0.68 denomination is the only stamp in the set to include a city scene. It shows the Supreme Court of Canada in Ottawa, Ontario, and also includes a view of the Ottawa River.

Pictured on the €1.70 stamp is Moraine Lake in Banff National Park in the Canadian Rocky Mountains in Alberta.

Lowe-Martin of Canada printed the stamps by offset in sheets of 20.

The first-day cover depicts Gonzalo Azumedi’s photograph of Jasper National Park in Alberta inside a maple leaf. A souvenir card also includes a symbolic maple leaf, along with a photograph of Canada geese in flight and a statement by Minister of Environment and Climate Change McKenna.