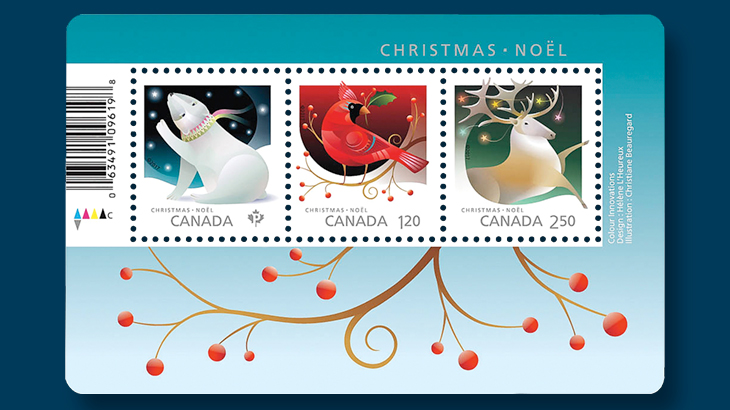 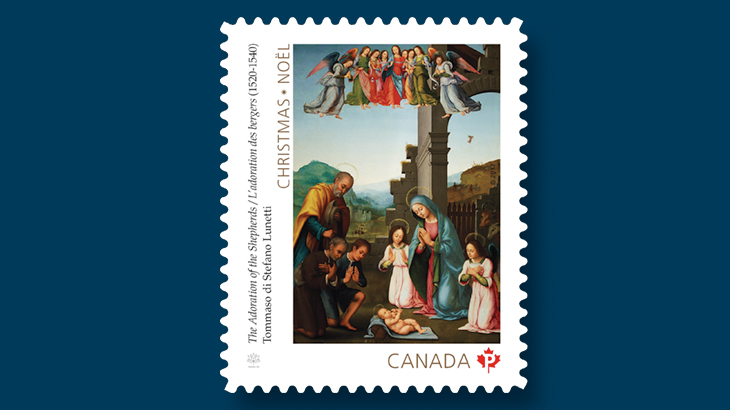 A new Canadian Christmas stamp reproduces the striking oil-on-panel painting The Adoration of the Shepherds believed to have been painted circa 1520-40 by 16th-century Florentine artist Tommaso di Stefano Lunetti.
Previous
Next

In 1964, Canada Post introduced 3¢ and 5¢ stamps picturing a family and the Star of Bethlehem to frank holiday mail (Scott 434-435) and has issued annual Christmas stamps ever since.

Canada Post continued that tradition Nov. 3 with a quartet of new sacred and secular Christmas stamps for those wishing to send seasonal cheer down the street or around the world.

As in 2015 (Scott 2279, 2281-2283), Canada’s secular-themed holiday issues showcase a trio of fanciful animals in candid, close-up, cameo-like portraits on a souvenir sheet and individual booklet stamps.

This year’s Holiday Animals were illustrated by Christine Beauregard and designed by Helene L’Heureux.

The pair have worked together on previous stamps for Canada Post, including the 2014 Christmas issue.

Designed by Louise Methe, the sacred issue for 2017 comes from Toronto’s Art Gallery of Ontario. This striking oil-on-panel painting is believed to have been painted circa 1520-40, and to have been displayed as an altarpiece.

According to Canada Post, “this carefully composed masterpiece was based on Luke’s gospel, in which angels announced the birth of Jesus to shepherds, who then rushed from their fields to find their newborn saviour.

The painting was donated to the museum in 1985 by Joey and Toby Tanenbaum, art collectors and philanthropists.

All of this year’s Christmas stamps were issued as self-adhesives in booklets: booklets of 12 for the sacred and Polar Bear stamps, and booklets of six for the Cardinal and Caribou stamps.

In addition, the three Christmas Animals stamps are se-tenant (side-by-side) in a souvenir sheet with moisture-activated PVA gum. The sheet measures 85 millimeters by 54mm.

All the 22mm by 24mm Christmas Animal stamps were printed by Colour Innovations in six-color offset lithography in quantities of 12 million of the Polar Bear permanent-rate stamp, 1.62 million for the $1.20 Cardinal; and 1.92 million of the $2.50 Caribou.

Only 100,000 three-stamp souvenir sheets were printed.

Canada Post’s first-day cover for the Christmas Animals stamp is franked with the souvenir sheet and postmarked with a golden sprig of berries from Cardinal, Ontario.

Lowe-Martin printed 8.4 million Adoration of the Shepherd stamps by six-color offset lithography and foil. The stamp measures 26 millimeters by 32mm.

Canada Post’s FDC for this stamp bears a Star of Bethlehem cancel from Toronto.

The new Christmas stamps and related items are available at their website. Stamps and FDCs are available by mail order from Canada Post Customer Service, Box 90022, 2701 Riverside Drive, Ottawa, ON K1V 1J8 Canada; or by telephone from the United States or Canada at 800-565-4362, and from other countries at 902-863-6550.