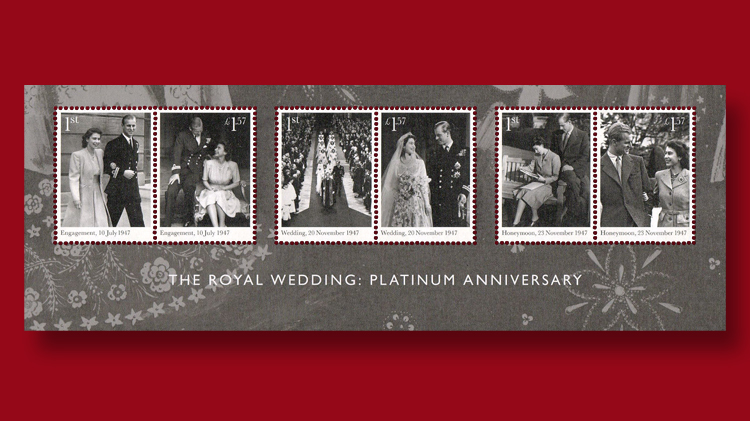 Great Britain’s Royal Mail celebrated the 70th anniversary of Queen Elizabeth and Prince Philip on Nov. 20 by issuing a souvenir sheet of six stamps. The stamps show photos of the royal engagement, wedding and honeymoon.

Seven decades of marriage calls for a celebration, no doubt about it. And when you’re the royal couple, the post office gets in on the action.

The engagement of Princess Elizabeth and Lt. Philip Mountbatten was announced July 9, 1947. Their nuptials took place Nov. 20, 1947, at Westminster Abbey in London. They honeymooned at Broadlands in Hampshire, home of Philip’s uncle, and at Birkhall on the Balmoral estate.

The six stamps in the souvenir sheet are arranged in three se-tenant (side-by-side) pairs, with each pair including a first-class stamp and a £1.57 stamp. The current first-class rate is 65 pence. The £1.57 stamps pay the rate for letters to Europe weighing up to 100 grams.

A photograph of a detail of Elizabeth’s wedding dress designed by Norman Hartnell is featured in the selvage of the souvenir sheet. The dress was made of ivory silk, decorated with crystals and 10,000 seed pearls and had a 15-foot train.

International Security Printers produced the souvenir sheet by lithography. The sheet measures 190 millimeters by 67mm, and the stamps are 27mm by 37mm. They are perforated gauge 14 by 14.

The FDCs display a photograph of the newlyweds enjoying a walk during their honeymoon at Broadlands.