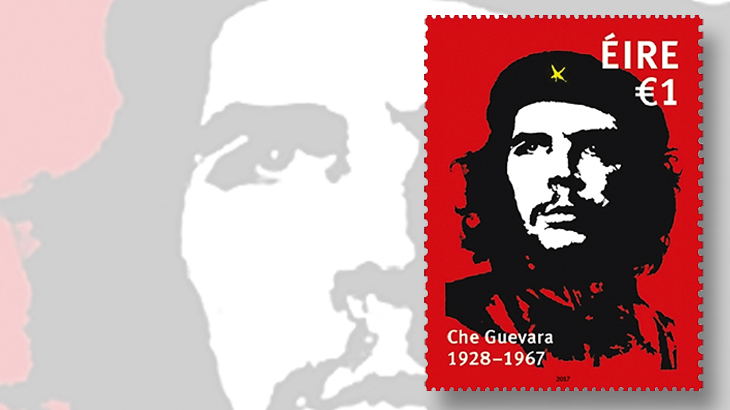 A new stamp from Ireland’s An Post marking the 50th death anniversary of Che Guevara generated controversy and demand. Issued Oct. 5, this €1 stamp was sold out by Oct. 12, and An Post is planning a second printing.

A spokesman for An Post told Linn’s: “The initial print run of our Che Guevara stamp has sold out. It is necessary to now print extra stock to cover our regular stamp customers and makeup of annual collector products, stamp yearbook, etc. It is anticipated that some additional stock will then be available for general sale.”

The initial print run from Cartor Security Printing was 122,000. The quantity of the second printing is not known.

In announcing the stamp, An Post described Guevara as an “Argentinian Marxist revolutionary,” and also as a “doctor, an author, a guerilla, a diplomat and a military theorist.”

The Biography says of his legacy: “Since his death, Guevara has become a legendary political figure. His name is often equated with rebellion, revolution and socialism. Others, however, remember that he could be ruthless and ordered prisoners executed without trial in Cuba.”

In the bulletin Irish Stamps, The Collector, Joanne Ferris of An Post pointed out two Irish connections to Guevara: “Did you know that Che Guevara was of Irish descent and that his ancestors actually hailed from the Kilkee area of West Clare? Ireland’s very own Jim Fitzpatrick created the instantly-recognisable black and red image of Che Guevara that you see on t-shirts and in posters on student walls everywhere has since become one of the world’s top 10 most iconic images.”

That 1968 image by Fitzpatrick is featured on the new stamp.

Criticism of the commemorative was swift, especially from the Cuban-American community.

On Monday morning, Oct. 9, Ninoska Perez, a Cuban-American journalist and public commentator at Univision Radio, spoke on Ireland’s RTE national public service broadcaster, saying of the stamp, “It doesn’t matter that it’s an image created by an artist, it’s the image of a murderer.”

“I really don’t know what it is that people find that there is to celebrate about the figure of Che Guevara,” Perez said. “I would love to see that stamp abolished. What does Ireland think they are doing by putting Che Guevara on a stamp? This is objectionable.”

Other news outlets picked up the story with headlines, such as “Ireland accused of ‘honouring a mass murder’ with new €1 stamp of Che Guevara” on the online version of The Irish Post, and “Some Cubans are outraged with Ireland’s ‘offensive’ Che Guevara stamp” from the Irish news website TheJournal.ie.

The Irish Post also reported on Irish politicians who had voiced their complaints on social media. For example, Independent politician Paddy Manning tweeted: “An Post, the Irish postal service, has issued a stamp of mass murdering Argentinian Marxist, Che Guevara. Ask your local PO not to stock it.”

Ireland’s Che Guevara commemorative had been approved by the government in 2015, according to a spokesperson from the Department of Communications.

Cartor printed the stamp by offset in sheets of 16. The firm Red&Grey designed it, using the poster image by Fitzpatrick. This poster was based on a photograph taken by Cuban photographer Alberto Korda.

On Instagram, Fitzpatrick said that he designed An Post’s first-day cover. The FDC includes a quote from Guevara’s father, Ernesto Guevara Lynch: “ … in my son’s veins flowed the blood of Irish rebels.”

As of Oct. 12, the An Post website showed the stamp, the sheet of 16, and the FDC as being out of stock.

This story, originally published Oct. 12, was updated Oct. 13 with new details about the rapid sell out of the stamp.