Emblazoned with “100,” this centennial version of the current Toronto Maple Leafs’ logo in silver is featured on a self-adhesive booklet stamp. 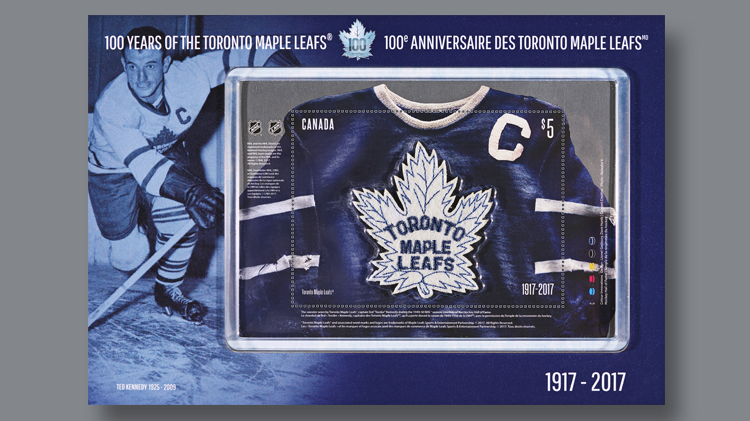 Canada Post’s presentation pack for the souvenir sheet containing the $5 stamp includes a protective plastic mount to protect the stamp, commemorative inscriptions and an image of Ted (“Teeder”) Kennedy, the player who wore the jersey as captain of the Ma 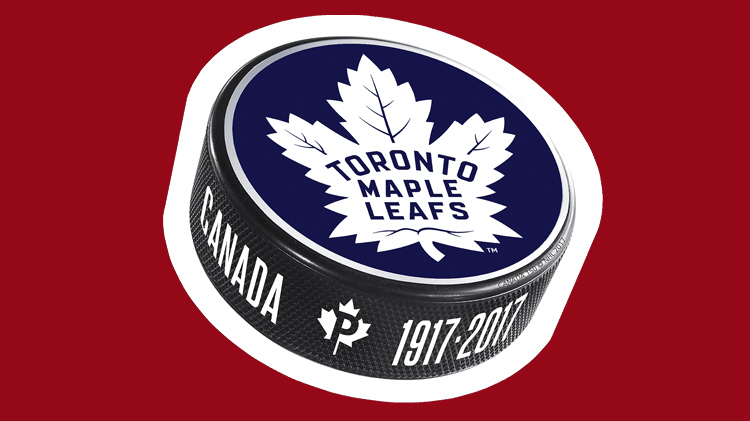 Pictured on this die-cut puck-shaped coil stamp is the latest Maple Leafs’ logo adopted in February 2016 as a throwback to those of the team’s glory days in the 1940s to 1960s.
Previous
Next

On Oct. 24, Canada Post put the emblem of Toronto’s most storied sports franchise, the Maples Leafs, on a trio of new postage stamps celebrating a century of memories in the National Hockey League.

A $5 fabric crest stamp, available only in a souvenir sheet, shows the Leafs’ logo from the sweater worn by legendary team captain Ted (“Teeder”) Kennedy during the 1949-50 NHL season, with the Leafs’ crest reproduced in fabric.

Canada Post said that it is “a unique and tactile stamp that stimulates the texture of and stitching of the crest sported by the Leafs during their first dynasty era.”

Kennedy played center for the Leafs between 1942-43 and 1956-57 and was one of two players on the team to have won five NHL Stanley Cup Championships.

In the Oct. 23 unveiling ceremony for the stamps, Canada Post president and CEO Deepak Chopra said: “The Toronto Maple Leafs are a part of the fabric that ties this country together with some of the most passionate fans in hockey. It is therefore an honour to celebrate the incredible legacy of this Original Six team through Canada Post’s iconic stamp program.”

In addition to the perforated $5 souvenir sheet with moisture-activated PVA gum, Leafs’ fans will cheer two-self-adhesive, die-cut issues: a booklet of 10 new silver logo Maple Leafs stamps with a centennial “100” where the team name usually appears, and a rather whimsical die-cut issue of puck-shaped coil stamps in Maple Leafs blue.

Coming on the heels of the Oct. 20 United States-Canada History of Hockey joint issue and the concluding set in Canada Post’s five-year Canadian Hockey Legends series issued Sept. 27, this trio of stamps for the Maple Leafs make this a year like no other for Canadian collectors and hockey topical collectors.

Both the booklet and coil stamps have a “P” inside a red maple leaf, indicating that they are permanent stamps paying the basic domestic rate (currently 85¢).

In a crowd-pleasing move, the Maple Leafs unveiled the most recent of numerous logos Feb. 16, 2016, a stylistic call-back to the popular design in use 60 years ago. This new logo is featured on the coil and booklet stamps, whereas the version pictured on the $5 souvenir sheet is the maple leaf worn by players from the 1940s to the ’60s.

Other versions of the iconic leaf appear in the photos from the Hockey Hall of Fame shown on Canada Post’s first-day covers for the three stamps. Also, the covers bear different Toronto cancels depicting Leafs’ logos.

The FDC cover for the booklet stamp shows Doug Gilmour, the popular and high-scoring center for the Leafs during the 1990s.

Pictured on the FDC for the puck-shaped coil stamp is Wendel Clark in the midst of a booming slapshot that seems to propel the stamp across the cover.

On the FDC for the $5 fabric souvenir sheet, “Teeter” Kennedy is shown at the height of his skills, powering the puck towards his next goal.

A total of 300,000 booklets of 10 were printed in two-color offset lithography with special silver ink and varnish (Canada Post order No. 414064111). The booklet stamp is square, measuring 32 millimeters by 32mm.

A news announcement from the NHL about the new stamps gave a brief history of the team: “The Maple Leafs were born as the Toronto Hockey Club, casually called the Torontos, and then the Arenas and St. Pats before being rebranded with their current name in 1927 by owner Conn Smythe. Now 13-time winners of the Stanley Cup, they were original members of the four-team NHL in 1917 with the Ottawa Senators, Montreal Canadiens and Montreal Wanderers.”

One page in the special 16-page October issue of Details, Canada Post’s philatelic sales publication, includes unsold Maple Leafs-related stamp items from as far back as the 2014 Zamboni ice-resurfacing machines coils with the Toronto team’s trademark. Mint stamps and FDCs still sell at their original prices, there are deep discounts on two “limited edition framed prints,” and the Maple Leafs Zamboni coil dispenser that once sold for $7.95 now fetches $3.97.

The Toronto Maple Leafs stamps are available online. Also, these and the other recent Canada hockey stamps and related items are available at their website.