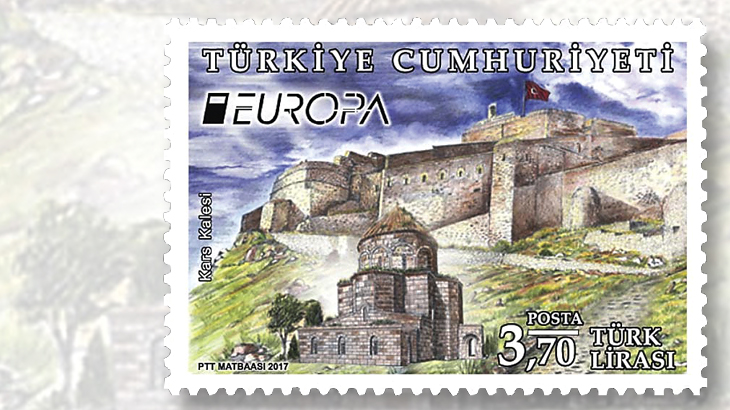 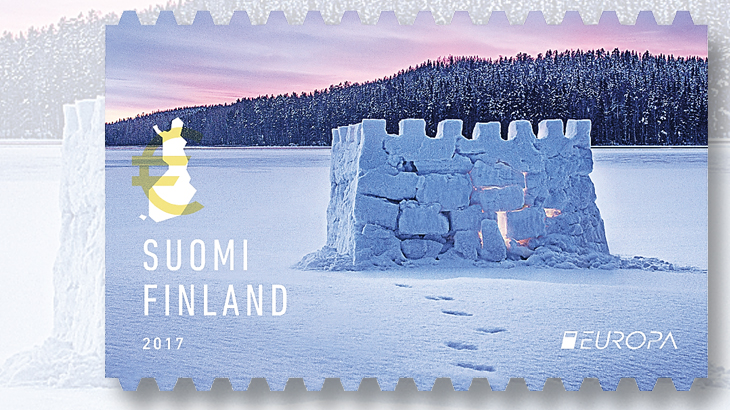 This Finnish stamp was selected the best Europa stamp of the year by a panel of experts. The Europa theme for the year was castles, and this design features a snow castle.
Previous
Next

Stamps from Turkey and Finland were voted as the favorite Europa stamps of this year in two separate competitions arranged by Posteurop, the Association of European Public Postal Operators.

The designs of both stamps feature castles, the Europa theme for 2017. Each of the 58 postal administrations participating in the competitions entered one stamp.

Anita Haggblom, chair of the Posteurop stamps and philately working group, said: “I am very proud to see a record number of entries with such beautiful designs! These incredible stamps display such beautiful landmarks of our diverse culture, which is spread throughout Europe. I am also happy to see that the designers used their creativity to achieve many different interpretations of this theme, also by using different production techniques, including engravings, varnishing and photography.”

The 3.70-lira stamp from Turkey pictures Kars Castle in northeastern Turkey. The fortification dates back to 1153, although the castle has been destroyed and rebuilt several times over the centuries.

Like many postal administrations, Turkey issued its Europa stamps May 9, Europe Day. The day commemorates the Schuman declaration of May 9, 1950, when Robert Schuman, the French foreign minister, proposed the creation of the European Coal and Steel Community.

Issued Jan. 20, Finland’s nondenominated domestic-rate Europa stamp depicts a snow castle rather than an actual castle. Finland’s post office, Posti, decided on this design because it had issued a booklet of Castle stamps in 2014 (Scott 1454).

Anssi Kahara, the designer of Finland’s Europa stamp, said: “I could not find the right picture of a snow castle anywhere, so I built a castle myself in Kymijoki, by the village of Iitti. I had amazing luck with the shooting conditions, as the evening sunset was absolutely beautiful.”

For the first time, the juried competition included a tie for second place, with stamps from Aland and Italy receiving an equal number of votes. Both stamps were issued May 9.

The stamp from Aland shows the archipelago’s only medieval castle, Kastelholm, as photographed by Niclas Nordlund.

The Italian stamp features Scaligero Castle of Malcesine as viewed from Garda Lake.

The awards for the juried competition were presented Sept. 16 at the Belgian Philatelic Grand Prix in Brussels, while those for the online popularity competition were announced during Posteurop’s plenary assembly held Sept. 27-29 in Bucharest, Romania.

The online competition was held May 9 through Sept. 9.