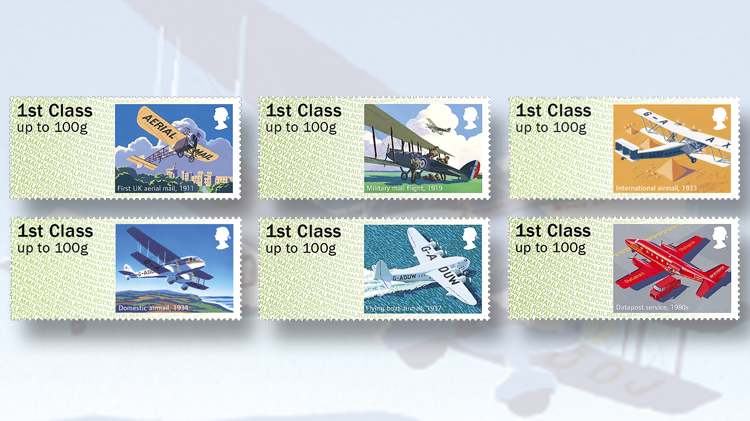 Mail by Air is the third set in a series with the theme of mail transportation. The previous two sets in the series were Royal Mail Heritage: Transport (Feb. 17, 2016), and Mail by Rail (Feb. 15, 2017). The series will continue next year.

In chronological order, the Mail by Air set begins in 1911 with the first scheduled airmail flight in the United Kingdom.

On Sept. 9, 1911, Gustav Hamel carried 23½ pounds of mail on a flight from Hendon to Windsor. The illustration on the label shows Hamel in his Bleriot monoplane, marked “Aerial Mail,” flying over Windsor Castle.

The next label commemorates the Royal Air Force’s first military mail flights in  1919. The design depicts bags of mail being loaded onto a De Havilland DH.10, while another plane flies overhead.

Royal Mail reports that 922 airmail flights were made from Folkestone, England, to Cologne, Germany, between March 1 and Aug. 31, 1919.

The design representing the start of international airmail shows a G-AAXF Helena flying over the pyramids in Egypt in 1933. This design is based on a photograph taken by aviation photographer Charles E. Brown (1896-1982).

The design for domestic airmail depicts the De Havilland DH.84 Dragon II plane named “City of Plymouth” flying over the coast. Railway Air Services Ltd. used this and 10 similar planes for both mail and passenger service.

Introduced in 1937, the Empire Air Mail Scheme   provided airmail service throughout the British Empire for 1½ pence per letter. Imperial Airways used flying boats for this service, and the label shows a G-ADUW Castor taking off. The design is based on a photograph from aerospace manufacturer Short Brothers.

The final label skips ahead almost a half century to the 1980s. This stamp represents the Datapost service, which Royal Mail describes as “an express mail service for guaranteed next-day delivery in any part of the UK, transporting mail bags from airports all over the country.”

The postage labels are available from terminals in post-office branches throughout the United Kingdom. The terminals allow customers to weigh their letters and packages, pay the postage, and print the appropriate label.

Royal Mail sells a set of the labels packaged with a carrier card that includes additional information about the history of carrying mail by air. Also, Royal Mail is offering a first-day cover franked with all six of the Mail by Air post & go labels.