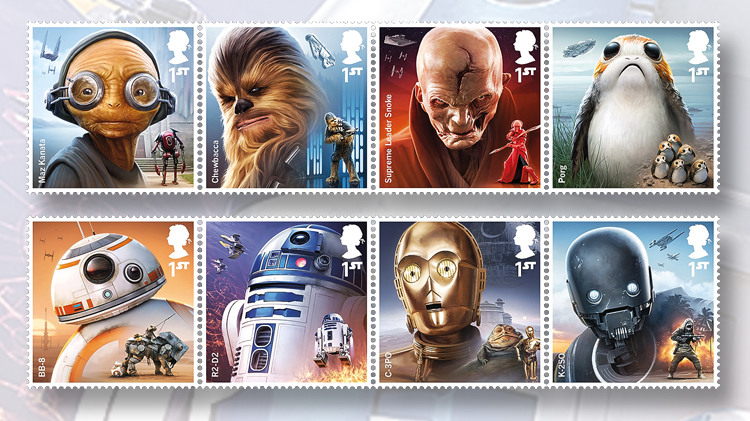 Great Britain’s Royal Mail will issue eight stamps Oct. 12 showing droids (robots) and aliens from the Star Wars film series. The stamps celebrate the upcoming opening (Dec. 14 in the United Kingdom and Dec. 15 in the United States) of Star Wars: The Last

Great Britain will issue eight stamps Oct. 12 in conjunction with the upcoming release of the film Star Wars: The Last Jedi, according to a Sept. 4 announcement from Royal Mail.

The stamps feature droids (robots) and aliens from the various Star Wars films. The droids are BB-8, R2-D2, C-3PO, and K-2SO, and the aliens are Maz Kanata, Chewbacca, Supreme Leader Snoke, and Porgs. Three of these — R2-D2, C-3PO and Chewbacca — date back to the first (episode IV) Star Wars film of 1977.

Royal Mail reports that in addition to these figures, each stamp will show a scene especially created by Tween “that includes the hero characters as well as an iconic spaceship or vehicle.”

Also, there is more than meets the eye to the four droid stamps because their designs will include features that will only be visible under ultraviolet light.

The designs are se-tenant (or side-by-side) in two strips of four. Each nondenominated stamp pays the first-class rate (currently 65 pence). The “1st” inscription replicates the font used in Star Wars films.

The first strip depicts the aliens, starting on the left with Maz Kanata, a small 1,000-year-old ex-pirate who debuted in the 2015 film Star Wars: The Force Awakens.

Pictured next is Chewbacca, an 8-foot-tall, hairy Wookie warrior and Han Solo’s co-pilot of the Millennium Falcon.

Like Maz Kanata, Supreme Leader Snoke of the First Order was introduced in Star Wars: The Force Awakens, but only appeared as a hologram. This sinister, shadowy figure is shown on the stamp as he will look in the upcoming film. Also pictured is a member of the elite Praetorian Guard.

New characters, the Porgs, are depicted on the final stamp in the aliens strip. These small, flightless birds live on Ahch-To, the remote planet where Luke Skywalker was sent to live in exile.

The droid strip begins with BB-8, described by Royal Mail as a “plucky droid” and a “loyal companion to Resistance fighter Poe Dameron in the fight against the First Order.”

The next two stamps show R2-D2 and C-3PO, an odd-couple matching that has provided comic relief in the films along with aid for the heroes. Also pictured on the C-3PO stamp is Jabba the Hutt.

The final stamp features K-2SO from the 2016 film Rogue One: A Star Wars Story. This reprogrammed Imperial security droid is now on the side of the Rebel Alliance in its fight against the Empire.

Royal Mail said the upcoming stamps “reflect the passion of the British public for the movies, and celebrate the major British contribution to the film series.”

Further information about the stamps will be available closer to their issue date. They can be pre-ordered on Royal Mail’s website.