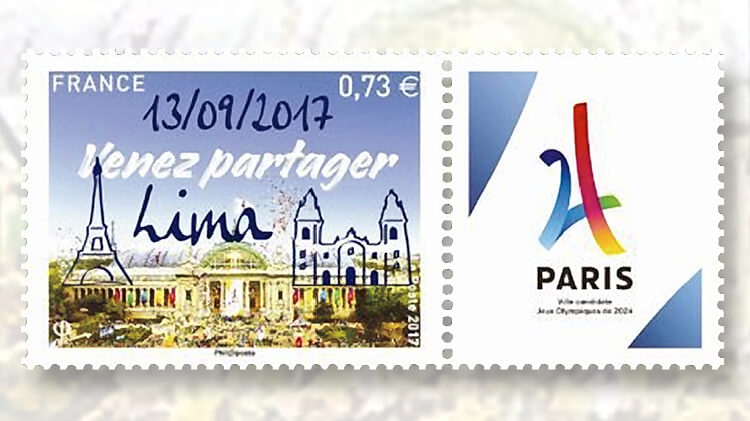 France celebrated the International Olympic Committee’s decision to award the 2024 Olympic Games to Paris with an overprinted stamp. The overprinted stamp is sold only in sheets of 24 stamps and se-tenant labels.

Almost immediately after Paris was selected as the host city for the 2024 Summer Olympics, France’s La Poste issued an overprinted sheet of stamps in celebration.

In May, La Poste had issued a 73¢ stamp with a se-tenant label promoting its bid to host the 2024 Games.

On Sept. 13, the day the International Olympic Committee’s decision was announced in Lima, Peru, La Poste released the overprinted version of this stamp in a sheet of 24 stamps and labels.

The basic stamp shows a Parisian scene with the Grand Palais in the foreground and the Eiffel Tower in the background. The slogan of the Olympic bid, “Venez partage” (Made for Sharing), appears above the skyline.

The overprint includes the date the IOC made its decision, “13/09/2017,” and the place, “Lima” (the IOC met in Lima), and outline images of the Eiffel Tower and the Basilica Cathedral of Lima.

La Poste reports that only 10,000 sheets of 24 stamps each were overprinted. For ordering information, email La Poste.

The non-overprinted version of the stamp can be ordered from La Poste’s online shop.

Also at the Sept. 13 IOC meeting in Lima, Los Angeles was announced as the host city of the 2028 Summer Games.