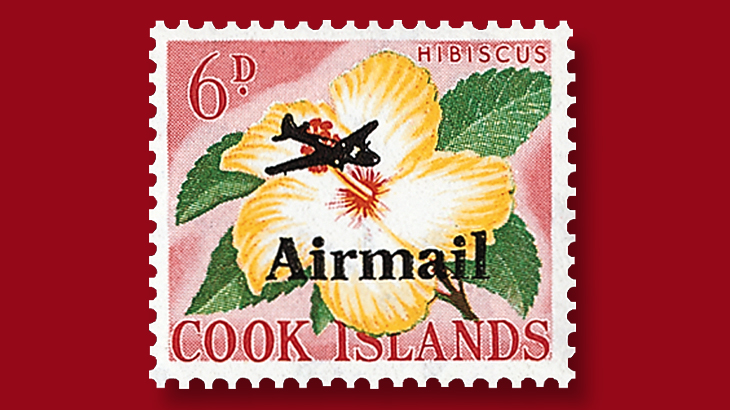 Airmail stamps for Cook Islands were created in 1966 by overprinting an airplane symbol and the word “Airmail” on previously issued stamps.

The May 14 issue of Linn’s Stamp News just landed on the presses and goes in the mail to subscribers Monday, April 30. And if you subscribe to Linn’s digital edition, you’re at the head of the line with early access Saturday, April 28. Here are three previews of exclusive content available only to subscribers.

A tour of the stamps of the Cook Islands

The 13 inhabited and two uninhabited islands making up the Cook Islands are located in the southern Pacific Ocean. The territory lies between American Samoa to the west and French Polynesia to the east. In an article exploring stamps of the area, Janet Klug begins with the first issue in April 1892 and moves forward from there.

Sometimes, the investigation of an odd philatelic item will lead to an answer, but occasionally even the answer begs yet another question. Wayne L. Youngblood offers an example of an 1889 cover that fits this description, as he hypothesizes the tale of its journey to the addressee in St. Louis, Mo.

A March 1948 letter mailed from Ireland to Chicago was suspected of containing lottery matter. Author Tony Wawrukiewicz describes what happened next in this article.