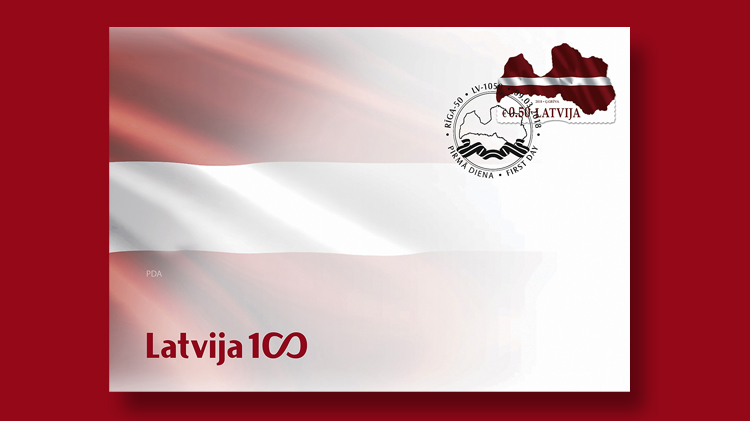 A map-shaped stamp from Latvia depicts the design of the country’s flag. Issued March 9, the stamp marks the 100th anniversary of Latvia’s 1918 declaration of independence. The stamp is the first Latvian irregularly shaped stamp.

Shown across the map is the carmine-red flag with its single white, horizontal stripe. The flag also is featured on the first-day cover from Latvijas Pasts.

The 50¢ stamp was issued March 9 to mark the 100th anniversary of the Latvian state.

The history section of the Latvian Institute’s website said: “The 20th century threw Latvia into endless trials and turbulences: a revolution, two world wars, freedom fights, several occupations, deportations, refugees and a large exodus among them. However, this was also the century when the Latvian state was created. In the aftermath of World War I, realising its right of self-determination the Latvian nation became a sovereign in the territory which since times immemorial had been inhabited by Latvians.”

In June 1940, Latvia was occupied by the Soviet Union. Fifty years later, on May 4, 1990, Latvia proclaimed its independence again and obtained full independence on Aug. 21, 1991.

Girts Griva designed the stamp, and Baltijas Banknote of Latvia printed it.