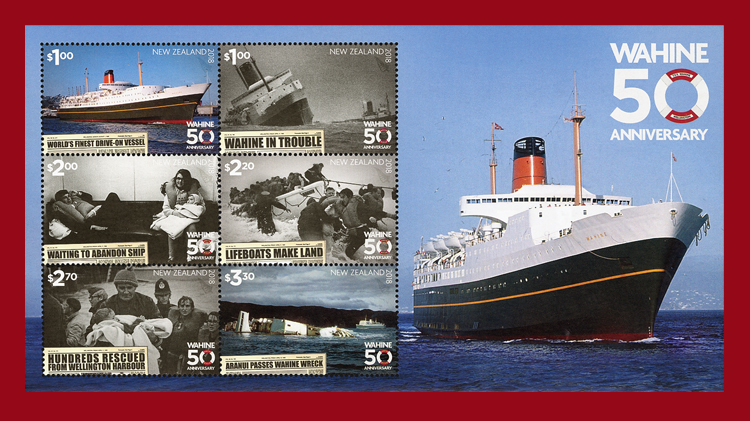 New Zealand Post issued six stamps and a souvenir sheet to commemorate the 50th anniversary of the sinking of the passenger ferry Wahine April 10, 1968. 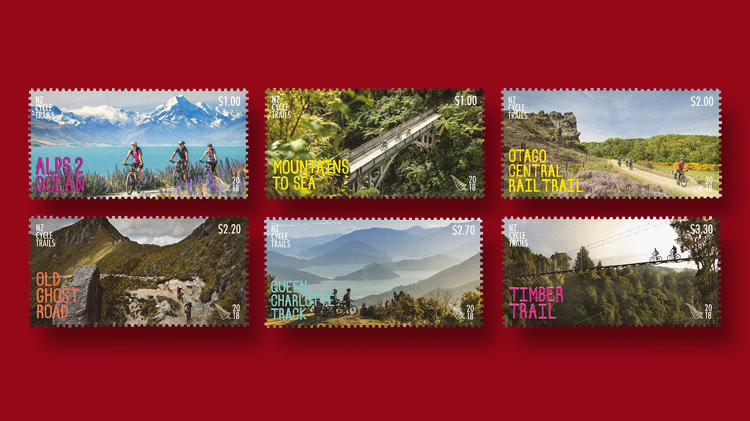 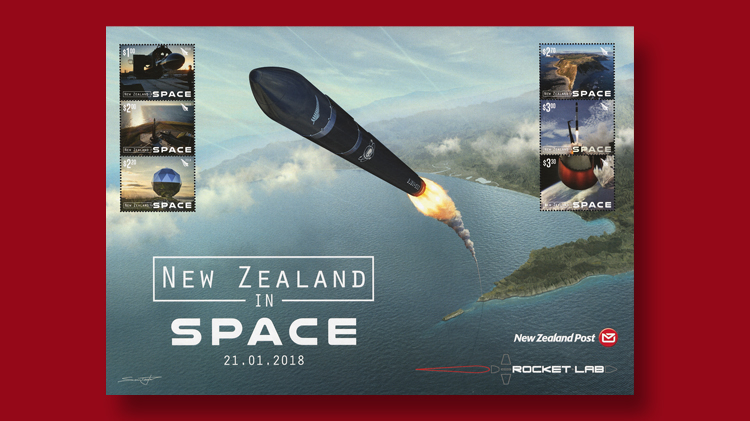 The successful test launch of the Electron rocket by the New Zealand and American company Rocket Lab on Jan. 21 is celebrated on a large souvenir sheet with six stamps issued by New Zealand Post on Jan. 26.
Previous
Next

Recent stamps and souvenir sheets from New Zealand portray travel on earth, by sea and into outer space.

The stamps commemorate the New Zealand Cycle Trail; the 50th anniversary of the sinking of the ferry Wahine; and the Jan. 21 launch of a rocket into orbit, a first for New Zealand.

With a total length of more than 1,500 miles and 22 different routes, the trail began in 2009 as a project to “build a network of cycle trails that would provide a healthy and enjoyable way for Kiwis and international visitors to see the country, and generate economic, social and environmental benefits for our communities,” according to the trail’s website.

New Zealand Post said, “From restored heritage trails, epic swing bridges and curious wildlife to luxury accommodation and more, the cycle trail offers something for everyone.”

The set of six includes two $1 denominations for the current standard domestic letter rate. One stamp features the Alps 2 Ocean trail on the South Island, and the other the Mountains to Sea trail on the North Island.

The Alps 2 Ocean trail is the longest cycling route in New Zealand, at more than 180 miles in length. It travels from New Zealand’s highest mountain, Aoraki Mount Cook, to the coastal town of Oamaru.

The cyclists on the Mountains to Sea stamp are riding on the Bridge to Nowhere, a concrete bridge constructed in the early 20th century as part of proposed project to provide road access for farmers of the Mangapurua Valley Soldiers Settlement. The settlement was abandoned and the roads never completed, but the bridge is now a popular tourist site.

A bridge also is featured on the $3.30 stamp featuring the Timber Trail through the Pureora Forest Park on the North Island. Of the 35 bridges on this trail, eight are suspension bridges, such as the one shown on the stamp.

Strategy Creative of Wellington, New Zealand, designed the stamps. Southern Colour Print printed them by offset in sheets of 25 and in a souvenir sheet of six with the  different stamps side by side.

Southern Colour Print also printed the set of six stamps and souvenir sheet commemorating the 50th anniversary of the Wahine disaster. The set was issued March 7.

In a new-issue bulletin announcing the stamps, Simon Allison, head of stamps and coins for New Zealand Post, said: “When the Wahine  ferry departed from Lyttelton Harbour on 9 April 1968, she had 734 passengers and crew on board. Tragically, everything changed in less than 24 hours, as a raging southbound cyclone collided with an icy southerly front. The Wahin capsized in the massive storm that followed, and 53 people lost their lives … ”

Designed by Jonathan Grey of New Zealand Post, each stamp depicts a photograph of the ship or the disaster and includes a mock newspaper headline describing the scene in the lower left and a logo for the anniversary in the lower right.

New Zealand Post said that the fictitious headlines represent the role the media played in telling the story of the disaster and rescue.

The first of the two $1 stamps reproduces a color photograph of the Wahine. The headline proclaims the ship as the “World’s finest drive-on vessel.”

The other $1 stamp shows a black-and-white photograph of the ship beginning to capsize. The headline reads “Wahine in trouble.”

Murray and Sharon Major and their six-month-old daughter Sarah are depicted on the $2 stamp with the headline “Waiting to abandon ship.”

According to an article by Lynley Ward in the April 2 New Zealand Woman’s Weekly, the couple and their daughter were traveling to Wellington for Murray’s new job at the post office.

Sharon Major shares her story of the disaster in the New Zealand Post presentation pack that includes the stamp set and the souvenir sheet.

The $2.20 stamp shows lifeboats making land, and the $2.70 depicts rescuers and survivors in Wellington Harbor. The man holding the baby is policeman Ray Ruane.

Pictured on the $3.30 stamp is the ferry Aranui passing the shipwreck site.

The New Zealand in Space souvenir sheet was issued Jan. 26, just five days after the successful test launch of the Electron rocket into orbit from Mahia Peninsula on the North Island.

The peninsula is shown on the $2.70 stamp, one of six stamps in the oversized souvenir sheet. The sheet is approximately 11½ inches by 8 inches.

The $2.70 stamp is the top one in the vertical strip of three in the sheet’s upper right. The next two stamps, $3 and $3.30, depict the launch and entering orbit, respectively.

Pre-launch scenes are shown on the $1 and $2 stamps in the upper left. The $2.20 denomination depicts the Humanity Star satellite, part of the rocket’s payload.

The private company behind the launch, Rocket Lab, describes itself as “an American company with headquarters in Los Angeles and a wholly-owned New Zealand subsidiary.”

New Zealander Peter Beck founded the company in 2006 with the mission to remove the barriers to commercial space by providing frequent launch opportunities to low Earth orbit.

Beck also created the Humanity Star satellite, “designed to be a temporary symbol in the night sky that encouraged everyone to look up, ponder humanity’s place in the universe and think about how we can work together as one species to solve the challenges facing us all”, according to the website.

In March, the satellite  “began its final descent into the Earth’s atmosphere where it burnt up on reentry, leaving no trace,” the website said.

Saint Andrew Matautia of New Zealand Post designed the stamps, and the selvage of the souvenir sheet was designed by Sam Taylor.