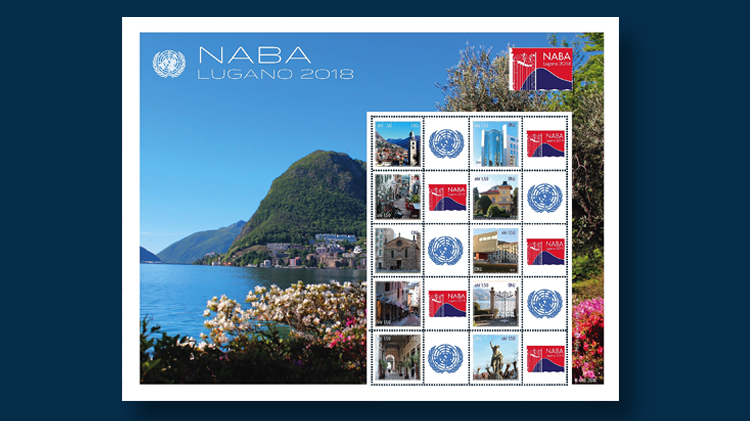 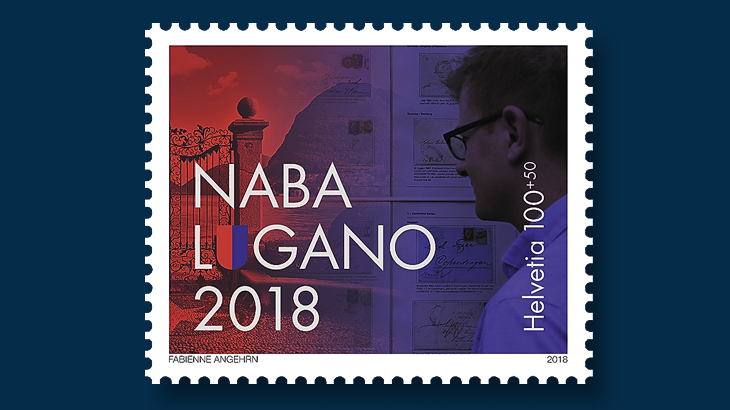 Swiss Post is issuing a semipostal stamp May 17 to honor its national philatelic exhibition, Naba Lugano 2018. The exhibition is held every six years in different Swiss cities.
Previous
Next

The United Nations Postal Administration and Swiss Post will each issue stamps May 17, the opening day of Switzerland’s national philatelic exhibition. The stamps are not a joint issue, however.

The Naba Lugano 2018 stamp show will take place May 17-20 at the Centro Esposizioni in Lugano, Switzerland.

Scenes of this city in the southern canton of Ticino are included on both the U.N. and Swiss issues.

The 1-franc+50-centime semipostal stamp from Swiss Post pictures the wrought iron gates of the Villa Ciani on the left side and a man viewing a philatelic exhibit on the right. The gates and the villa are part of Ciani Park built by the Ciani family in the middle of the 19th century. The city purchased the villa and park in 1912.

The same gates are shown on one of the 10 Naba Lugano stamps from the UNPA. The stamps are denominated 1.50fr for use from the U.N. post office at the Palais des Nations in Geneva, Switzerland, and are being issued in a pane of 10 stamps and 10 labels.

The second stamp from the bottom on the right depicts the gates of villa overlooking Lake Lugano (also known as Lake Ceresio) and Monte San Salvatore.

Starting in the upper left, the first stamp in the UNPA pane shows a panoramic view of Lugano with the tower of San Lorenzo Cathedral in the foreground.

Continuing down the left side of the pane, the second stamp features the Salita Chiattone steps, and the third stamp shows the Church of St. Mary of the Angels (Chiesa Santa Maria degli Angioli).

Two pedestrian street scenes, Via Cattedrale and Via della Posta, complete the left side of the pane.

The stamp in the top right represents modern Lugano, showing a bank building designed by the Swiss architectural firm Camponovo.

Pictured next is the Villa Saroli, located in a botanical park in the middle of the city.

The city’s art and cultural center, Lugano Arte e Cultura or LAC, combines modern architecture with that of the former Palace Hotel and a Franciscan convent. Part of the center, including the facade of the hotel, is shown on the third stamp on the left.

The final stamp depicts the William Tell monument on the lakefront promenade in front of the entrance to Ciani Park. Vincenzo Vela sculpted this monument in 1856.

Five of the 10 labels in the UNPA pane show the U.N. emblem, and the other five depict the logo of the Naba Lugano exhibition. The logo features the Villa Ciani gates and Monte San Salvatore.

Monte San Salvatore is shown again in the photograph reproduced in the selvage of the stamp pane. The U.N. emblem and show logo are included in the upper left and right, respectively.

According to an inscription in the lower left of the pane, the photographs are by Roberto Leber.

The Swiss stamp was designed by Fabienne Angehrn, and offset-printed by Gutenberg AG of Liechtenstein in sheets of 16.

The 50c surtax on this stamp will be used to promote philately and help finance the exhibition.

For more information about the UNPA stamp pane, visit the website.

Switzerland adds an extra dimension to its Christmas Carols stamps