Signs of summer: bees are buzzing on two different Canadian permanent stamps issued May 1 in booklets 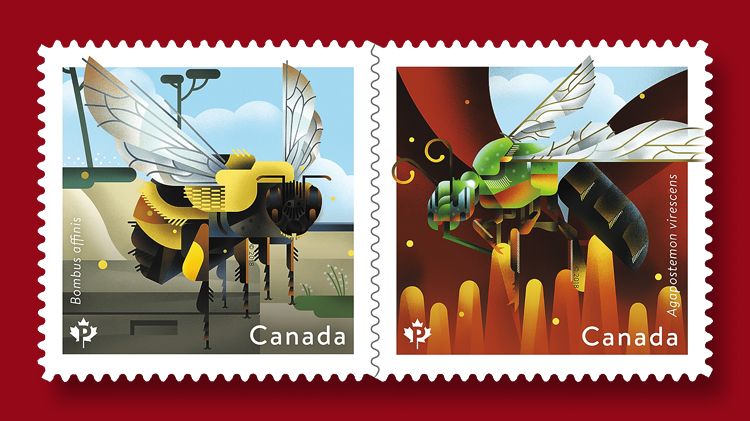 Canada Post is issuing a Bees booklet of 10 stamps May 1. The booklet includes five se-tenant pairs of stamps showing the rusty-patched bumblebee and the metallic green bee, respectively.

New booklet stamps from Canada Post depict the rusty-patched bumble bee and metallic green bee, two of the more than 850 species of bees native to Canada. The stamps are stamps being issued May 1 in booklets of 10, with the two design se-tenant (side-by-side).

The stamps are nondenominated with a “P” inside a maple leaf, indicating that they are permanent stamps paying the basic domestic rate (currently 85¢).

In announcing these stamps in its Details magazine for collectors, Canada Post said: “When bees begin to appear, it is a sure sign that summer is on the way — and designer Andrew Perro and illustrator Dave Murray have come up with a honey of an issue to help celebrate.”

Perro has designed several previous stamps for Canada Post, including the 2015 Dinos of Canada set (Scott 2823-2628) and the 2013 commemorative honoring 250 years of postal history and picturing Benjamin Franklin (2649), among others.

A Toronto-based illustrator, Murray is known for his geometric style, which has been described as futuristic cubism.

The first stamp in Canada Post’s Bees pair shows the rusty-patched bumblebee (Bombus affinis). Native to North America, this bee is considered endangered in both Canada and the United States.

Wildlife Preservation Canada said: “One of the most common species of bumblebee in southern Ontario as recently as the 1980s, this hard-working pollinator is now on the brink of extinction throughout its large range. Despite thorough surveys of historic sites across Ontario, the rusty-patched bumblebee has not been observed in Canada since 2009.”

The last known sighting in Canada was at Pinery Provincial Park in Ontario, perhaps the scene that is shown in the background of the stamp design.

As its name suggests, the metallic green bee (Agapostemon virescens) has a shiny green head and thorax. It is a member of the Halictidae family, commonly referred to as sweat bees. These bees built their nest in the group.

In Canada, this metallic green bee is found in southern Ontario. It also is distributed throughout much of the United States.

Canadian Bank Note printed the Bees stamps by four-color lithography in a quantity of 140,000 booklets of 10, Canada Post product number 414084111.

The stamps are square, measuring 31 millimeters by 31mm.