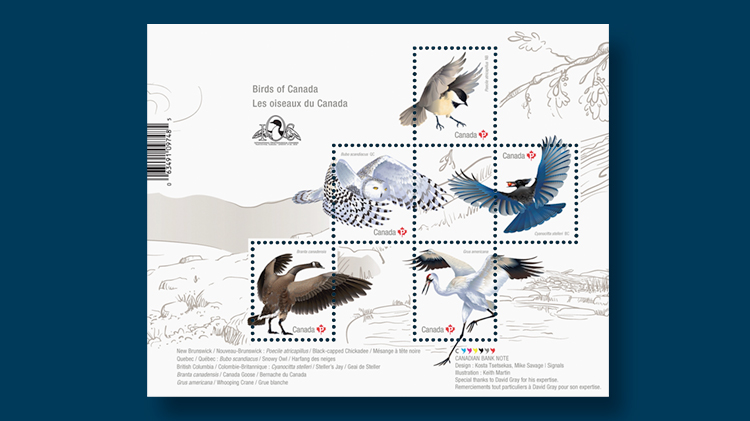 The third and final installment of Canada Post’s Birds series shows five different feathered creatures in flight, including a species that was once extremely close to extinction.

The black-capped chickadee is the smallest species of the five, measuring roughly 4.7 by 5.9 inches long. It has been described as acrobatic and prefers to take its food “to go,” meaning that it rarely remains at a feeder to eat.

This chickadee was named New Brunswick’s provincial bird in 1983 when it won a contest run by the New Brunswick Federation of Naturalists.

The beautiful white whooping crane was included in the set at Gray’s suggestion. The Canadian population of the species dwindled to less than 20 in 1941, but conservation efforts have raised that number to the hundreds today. The stunning bird has a wingspan of 7 feet and height of 5 feet.

“Most Canadians will never see a whooping crane, but this stamp celebrates the fact that they are still with us,” Gray said. “This amazing bird is one of Canada’s most successful conservation stories.”

Unlike the whooping crane, the Canada goose is easy to find as it lives near lakes, rivers, ponds and in yards, park lawns and fields.

According to Details, Canada Post’s magazine for collectors, “... the Canada goose is an ubiquitous resident whose noisy, awe-inspiring migrations herald the arrival of winter and spring.”

The snowy owl was adopted as the official bird of the province of Quebec in 1987. The beautiful fowl is white with differing amounts of brown or black markings (females tend to have more markings than males). They have yellow eyes and no ear tufts, making their heads smooth and round.

The final bird in the set is the Steller’s jay, the official bird of British Columbia. It can be found in coastal, southern and central parts of that province. The songbird is known for its black head and blue body and wings, and is the western counterpart to the blue jay found in eastern and central parts of the United States and southern Canada.

On the souvenir sheet, each bird design extends through the perforations and onto the selvage between stamps, rather than fading out at the edges of the stamp design as on the booklet singles.

Canadian Bank Note printed these stamps by six-color offset lithography. A total of 400,000 booklets, and 85,000 souvenir sheets were printed.

In addition, 25,000 souvenir sheets were overprinted with the logo of the 2018 International Ornithological Congress, taking place Aug. 19-26 in Vancouver, B.C.

Nondenominated postal cards are being issued in sets of five (Canada Post order number 262481, $12.50 per set). Each card displays an image of the entire bird from which the stamp designs were taken.