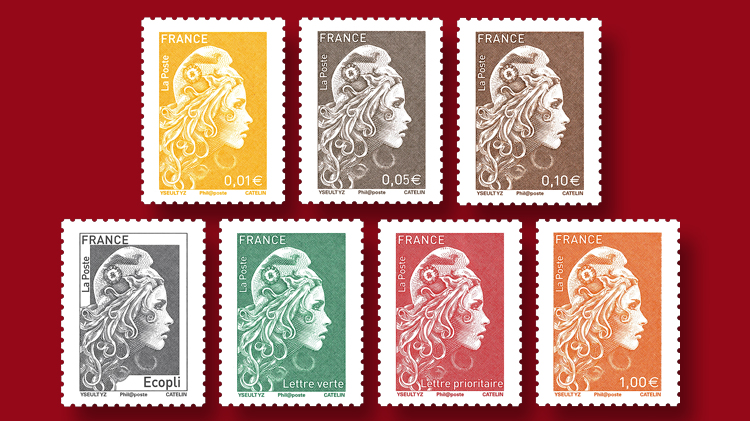 A new portrait of Marianne, France’s famous representation of liberty, has been created for that country’s newest definitive stamp series. The design is based on a portrait by street artist YZ, and line-engraved by Elsa Catelin. 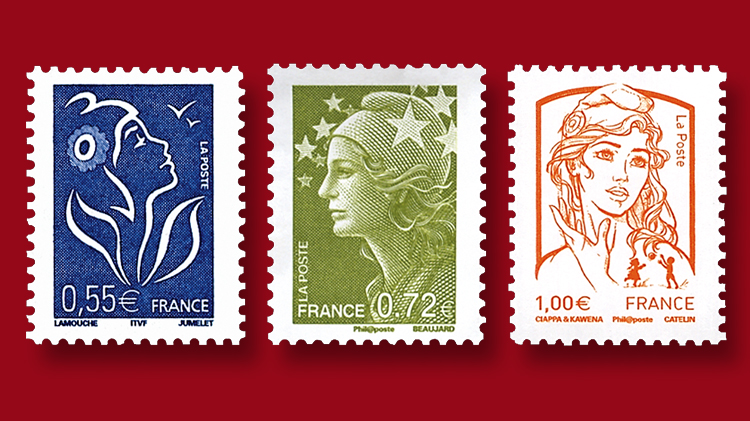 The new Marianne series is the fourth to appear in the 21st century. The themes of the three earlier series are Marianne for the Environment in 2005, Marianne of Europe in 2008, and Marianne for the Children in 2013. 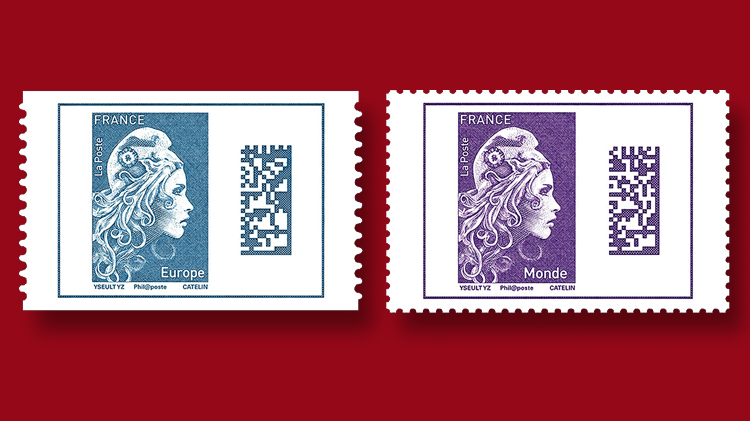 The single vertical design for this issue is a new portrait of Marianne, the cherished national symbol of liberty for the French Republic.

Following recent tradition, the president selected the stamp design from a group of competing contenders.

Marianne definitive stamps in nine denominations were placed on sale July 23 with individual values ranging from €0.01 to a nondenominated stamp for international mail with a €1.30 value.

The new design shows the head of the patriotic icon in profile facing right. She is portrayed wearing the traditional soft Phrygian cap adorned with the tricolor cockade, the circular insignia worn by French revolutionaries at the end of the 18th century.

La Poste reports that the stamp design represents Marianne l’engage, which can be translated as Marianne the Engaged (as in, engaged in social consciousness or political action).

The portrait was created by Yseult Digan, a prominent French street artist currently based in Ivory Coast who is popularly and professionally known as YZ (pronounced “eyes”).

Her name is reproduced under the lower left corner of the stamp illustration as “YSEULT YZ.”

The portrait embodies modernity and youth, according to La Poste, and its contemporary representation reflects the aesthetics of street art.

“She seems driven by an impulse, a desire to act to move the lines,” according to YZ (in translation). “She derives her beauty from her courage, independence and energy.”

The president and the first-time stamp artist both participated in the unveiling event.

In a July 23 report for ArtNet News, associate editor Naomi Rea wrote about the stamp unveiling, noting, “The work appears on a 50-foot mural on the side of a public housing estate in Perigeux, a well-populated town in southwestern France a few miles from the factory of La Poste where the stamps are made.”

La Poste reports that YZ painted the fresco over the course of two nights prior to the public event.

The postal service also said that for the first time, two women comprised the creative team behind the Marianne issue.

Elsa Catelin created the line engraving for the portrait based on the illustration by YZ.

Catelin has engraved more than 200 postage stamps for France and its overseas territories, plus Belgium and Monaco, according to La Poste.

The individual stamp denominations issued July 23 are €0.01 yellow, €0.05 bister, €0.10 brown and €1 orange, plus five nondenominated values: gray (€0.78) for the least expedient “ecopli” domestic letter rate, green (€0.80) for the green domestic rate that travels only by ground transportation, red (€0.95) for first-class domestic letter mail, blue (€1.20) for letter mail addressed to destinations in Europe, and violet (€1.30) for other destinations worldwide.

The latter two stamps feature the same vertical design as the others, but in a larger horizontal format that also includes a two-dimensional data matrix code that aids in sorting mail for international destinations.

The stamps are all available individually in gummed format, including vertical coils of 500 for the red and green letter-mail issues.

The Marianne figure has appeared almost continuously on French definitive stamps for the past 70 years. The new series is the fourth initiated this century, following the Marianne for the Environment series in 2005, Marianne of Europe in 2008, and Marianne for the Children in 2013.

The stamps of these French definitive series and those of many stamp series before them have line-engraved designs that are intaglio printed. The same time-honored process is still used today for the designs of many of France’s commemorative stamps.

Additional information about the 2018 Marianne series stamps can be found on the retail website of La Poste.