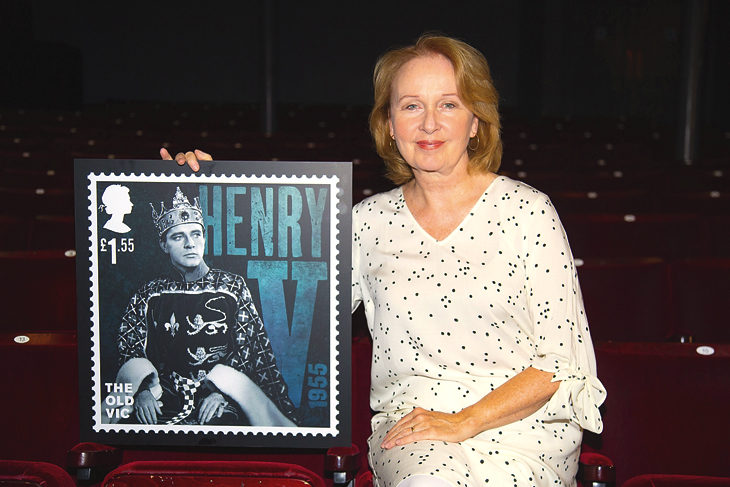 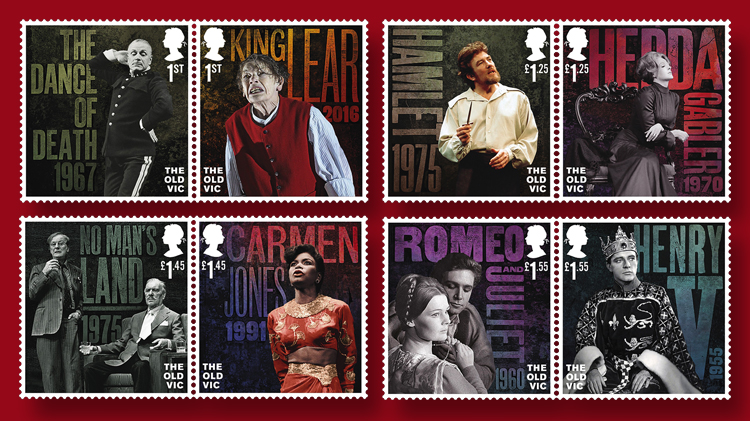 Great Britain’s Royal Mail is issuing eight stamps Aug. 30 to commemorate the 200th anniversary of the Old Vic Theater in London. The stamps, in four se-tenant pairs, capture outstanding performances at the Old Vic. The stars pictured on the stamps are La
Previous
Next

Royal Mail marks the 200th anniversary of one of the most famous venues in British theater with eight stamps issued Aug. 30.

The new theater seated 3,800 and offered melodramas, Shakespeare revivals and more. In 1833, the theater was renamed the Royal Victoria, and 38 years later the auditorium was remodeled and renamed the Old Vic.

Today, the not-for-profit theater seats 1,000, and performances are just £10 a ticket. The Old Vic’s website describes the auditorium as “mercurial.”

“… It can transform into a theatre in the round, a space for music and comedy, has played host to opera, dance, cinema, music hall, classical dramas, variety, clowns, big spectacles and novelty acts. It was the original home of the English National Opera, the Sadler’s Wells dance company and the National Theatre. It’s also been a tavern, a college, a coffee house, a lecture hall and a meeting place,” the website said.

The eight Old Vic stamps were issued in four se-tenant (side-by-side) pairs, featuring 10 actors and actresses that have helped shape modern British theater as they performed on its stage.

“So many of our finest actors have trodden its boards and it has been instrumental in shaping UK theatre,” Royal Mail’s Philip Parker said. “Our striking new stamps celebrate this with great actors in unforgettable roles at The Old Vic.”

Each stamp includes the inscription “The Old Vic” in either the left or right bottom corner, images of the actors and actresses in character, and the name of the show and year.

The nondenominated first-class stamp pair features Laurence Olivier starring in The Dance of Death, 1967, and Glenda Jackson in King Lear, 2016. The first-class rate is 67p.

The £1.25 stamp pair shows Albert Finney in a 1975 production of Hamlet, and Maggie Smith in Hedda Gabler in 1970. These stamps pay the rate for letters to Europe weighing up to 20 grams and to other countries weighing up to 10 grams.

Ralph Richardson and John Gielgud in No Man’s Land, 1975, are featured on the first of the two £1.45 stamps. Sharon Benson in the Oscar Hammerstein II musical Carmen Jones, 1991, is on the second. The £1.45 stamps are for use on international letters weighing up to 20 grams or for international economy letters up to 100 grams.

Benson, who played Carmen Jones, was thrilled with her stamp. “When I first saw a picture of it last year, I thought ‘wow!,’” she said. “… They’ve picked the best image to depict my favorite memory of the performance. It’s such a strong scene. Everyone’s in silver and Carmen walks in wearing this red outfit — I’m getting chills just thinking about it!”

The two £1.55 stamps each feature a Shakespeare play. Judi Dench and John Stride star in a 1960 production of Romeo and Juliet on one stamp, and Richard Burton plays the lead role in a 1955 production of Henry V on the other. The £1.55 stamps fulfill the rate for letters to Europe up to 100 grams.

Burton (1925-1984) had great success at the Old Vic, establishing himself as a Shakespearean actor in Henry V, Othello, Hamlet, King John and more.

Kate Burton, Grey’s Anatomy and Scandal actress and Richard Burton’s daughter, told Royal Mail her father would have been thrilled with the new stamp issue.

“It’s an important tribute,” she said. “It’s a fitting tribute. I’m so happy that dad is being recognized for his brilliant work on stage because, god knows, he had such a wonderful colourful life, never a dull moment, but he was an unbelievably gifted actor.”

They were printed by International Security Printers by lithography in sheets of 60, sold in panes of 30 at most postal outlets. The stamps are moisture-activated with PVA gum.

Other products for this set include first-day covers, eight postcards reproducing the designs of the stamps, and a presentation pack that includes the history of the Old Vic.

The FDC with a Tallents House, Edinburgh postmark includes the eight stamps canceled with Glenda Jackson’s quote about the theater: “There’s nowhere else like it.”

An alternative first-day postmark from London features the stamps canceled with an original illustration of the Old Vic’s exterior.