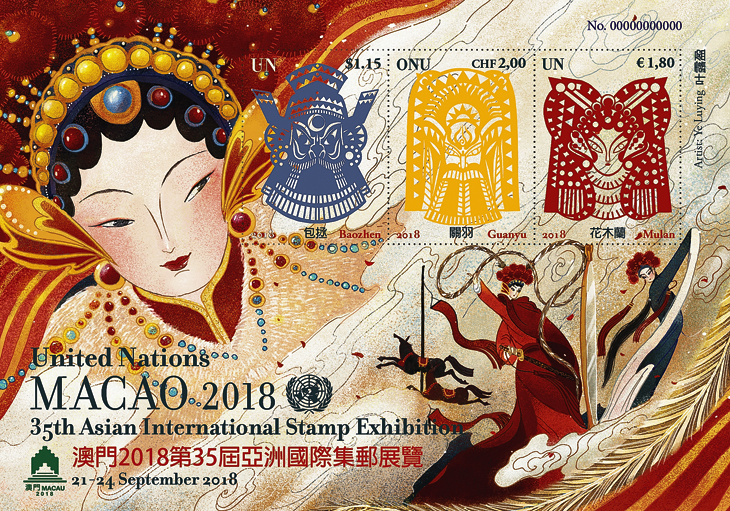 An upcoming souvenir sheet from the United Nations Postal Administration features the ancient Chinese poem the Ballad of Mulan and also honors a stamp exhibition in Macao.

The sheet will be issued Sept. 21, the opening day of Macao 2018, the 35th Asian international stamp exhibition. The event will run through Sept. 24 at the Macao Venetian Convention and Exhibition Center.

The stamps in the sheet were printed using a special laser-cut technology, according to UNPA. Liechtenstein Post has used similar technology since 2011 for its New Year/Chinese Signs of the Zodiac stamps (Scott 1534).

Preliminary artwork of the U.N. Macao 2018 souvenir sheet is shown above.

The sheet contains three stamps denominated in three different currencies: $1.15 for use from the post office at U.N. headquarters in New York City; 2 francs for use from the Palais des Nations in Geneva, Switzerland; and 1.80 for use from the Vienna International Center in Vienna, Austria.

The designs of the stamps resemble Cantonese opera masks.

Hua Mulan, the heroine of the folk tale of a girl who joins the army in the place of her elderly father, is represented on the 1.80 stamp and in the selvage of the souvenir sheet. According to UNPA, these images were “inspired by the stages of Hua Mulan acted by famous last generation Cantonese opera actresses Madam Lang Yunyu and Guo Fengnv.”

The laser-cut design on the $1.15 stamp shows Bao Zheng, also known as Justice Bao. Although much of his life has been fictionalized over the years, Justice Bao was a government official who lived from 999 to 1062.

Guan Yu, represented on the 2fr stamp, was a warrior and general. He is believed to have died around 220. Like Justice Bao, Guan Yu’s life inspired legends.

According to UNPA, the three figures on the stamps serve as symbols of justice (Judge Bao), loyalty and righteousness (Guan Yu), and bravery and equality (Hua Mulan).

Cartor Security Printing of Meauce, France, printed the souvenir sheet in a quantity of 18,000. Ye Luying of China designed the sheet.

The story of Hua Mulan’s bravery has been retold many times over the centuries, including on postage stamps.

Less than a month after the debut of Walt Disney’s animated film Mulan in June 1998, The Gambia issued stamps and souvenir sheets featuring the characters (Scott 2043-2048).