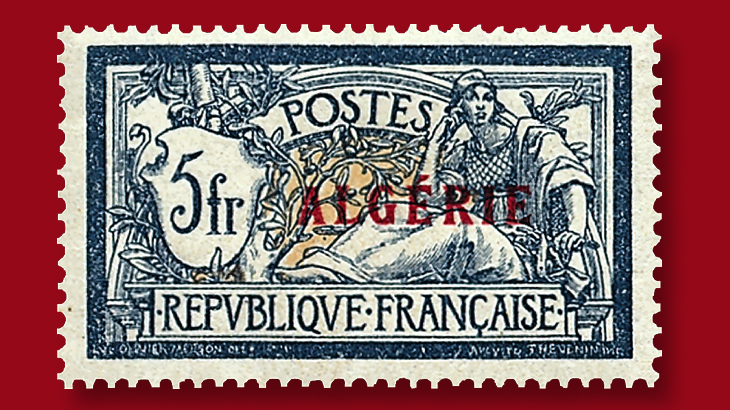 Algeria’s first set of definitive stamps (Scott 1-32) is in demand and is a good buy at the 2018 Scott Standard Postage Stamp Catalogue value.

The market for classic stamps (roughly speaking stamps issued from 1840 to 1940), especially colonial issues, is among the most active of current stamp markets. Long, colorful sets of definitive stamps are always in demand and are often surprisingly inexpensive.

The largest country in Africa, Algeria includes both a Mediterranean coastline and the Sahara Desert.

For almost 100 years, Algeria was under French rule. After conquering it by main force from roughly 1830 to 1870, France governed Algeria as an integral department of France. There was a sizable population swap as people from France settled in Algeria, and Algerians moved to France.

Things fell apart in 1954 with the outbreak of the Algerian War between Arab Muslim nationalists and the French government. The war concluded in 1962 with Algerian independence.

Known as Pieds-Noirs (Black Feet), Christian and Jewish Algerians, most of who were of French or European ancestry, immigrated to France after the war.

The set is a good buy at Scott catalog value if the higher valued stamps are not faulty. You can easily replace lower value stamps that are faulty or not well centered.

Although not priced as a set in mint never-hinged condition, the total catalog value for such a set is $72. You would be lucky to find a set, and it would be well worth that or more.