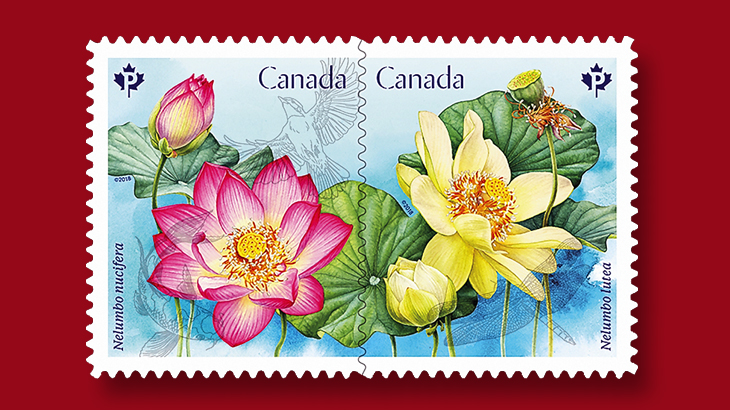 The American lotus and the sacred lotus are depicted on new Canadian stamps issued March 1, continuing the country’s Spring Flowers series that began in 2002. A souvenir sheet with the pair of new stamps also was issued.

On March 1, Canada Post is issuing nondenominated (85¢) Lotus permanent stamps with two different designs, in a self-adhesive booklet of 10, a self-adhesive coil of 50 and a souvenir sheet of two. The two designs are se-tenant (side by side).

As in past years, a set of two nondenominated international rate postal cards with the new stamp designs will likely be issued, but this was not confirmed by Canada Post.

The Lotus stamps were designed by Parcel Design of Toronto based on watercolors by Eunike Nugroho, a botanical artist from Indonesia.

The sacred lotus with its delicate pink and white petals was adopted as the national flower of India in 1950 and has deep religious significance for Buddhists and Hindus.

This aquatic perennial is native to Asia and northern Australia, but is also cultivated in North America.

Canada Post described the American lotus as having a  creamy yellow flower that needs warmth and sunshine. Its habitat in Canada is the “northern limit along the shores of lakes Erie and St. Clair in southern Ontario.”

This flower also occurs throughout most of the eastern half of the United States, as well as California, and as far south as Honduras.

Both the sacred and the American lotus are edible and also have been used for medicinal purposes.

Each set in Canada Post’s Spring Flowers series has been issued both in a self-adhesive booklet and in a perforated souvenir sheet.

The new Lotus stamps were printed by Lowe-Martin. Additional information on the print quantities or specific order numbers was unavailable at press time, but will be included in a future issue of Linn’s.

Canada Post will service official first-day covers franked with both of the booklet stamps. The FDC will bear a postmark from Waterdown, Ontario.