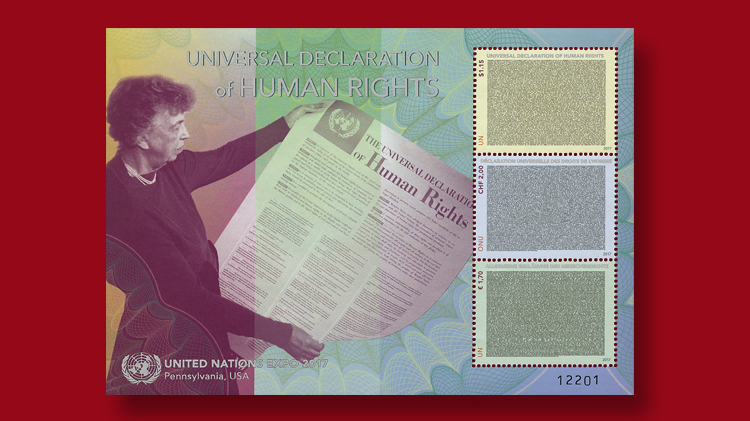 The entire text and preamble of the Universal Declaration of Human Rights are printed on each of the three stamps in this United Nations (New York) souvenir sheet. The new sheet is now listed as Scott 1177.

It’s time to serve up another plate of new Scott catalog numbers.

The new Scott numbers detailed here are for U.N. stamps from the offices in New York, N.Y.; Geneva, Switzerland; and Vienna, Austria. New Scott numbers for worldwide stamps are given in the Scott New Listings Update in the expanded monthly issue of Linn's Stamp News.

Among the significant issues receiving Scott numbers is the three-stamp souvenir sheet issued Oct. 27, 2017, to honor the Universal Declaration of Human Rights. The entire text and preamble of the declaration are printed on each stamp in English, German and French.

Now that you have some context, here is your batch of new U.N. Scott numbers:

All of the numbers appear in the Catalogue Update section of the Feb. 19, 2018, issue of Linn’s Stamp News. For further information contact Martin J. Frankevicz.